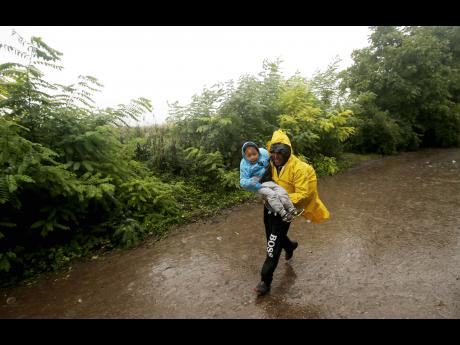 AP
A group of migrants head to cross a borderline between Serbia and Croatia, near the village of Berkasovo, about 100 km west from Belgrade, Serbia, on Tuesday. 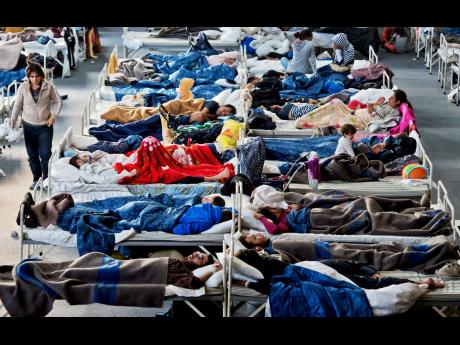 AP
Migrants rest in a shelter in central Germany last Thursday. Refugees going to Germany can expect a roof over their head, a bed to sleep in and three meals a day. But with authorities struggling to find housing for tens of thousands of people each month, many new arrivals will find their lodgings a squeeze. 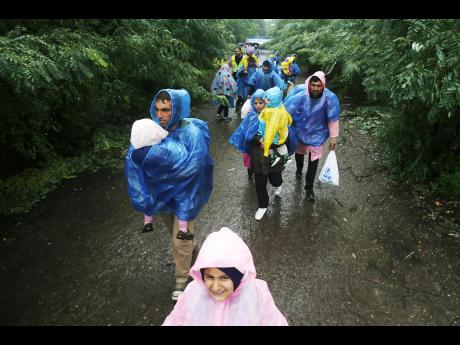 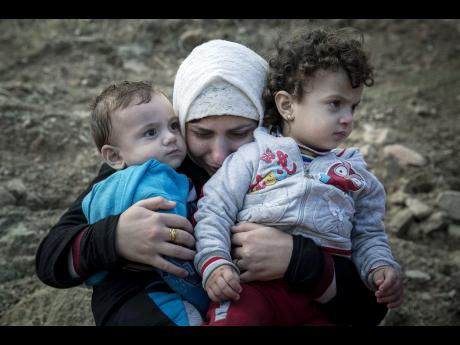 AP
A Syrian mother cries as she hugs her children after spending five hours on a dinghy to approach the Greek island of Lesbos from the Turkish coasts on Wednesday. The International Organization for Migration says a record number of people have crossed the Mediterranean into Europe this year, now topping half a million, with some 388,000 entering via Greece.
1
2
3
4

Afghan asylum-seeker Asina Ansari stood ankle-deep in mud on the border between Serbia and Croatia, clutching her feverish and shivering two-year-old son Mohtar in a blanket.

Their dream is to reach Sweden, where she has an uncle. But as the teacher from Kabul stood in a cornfield with hundreds of other asylum-seekers waiting for hot soup, that dream seemed far away.

"I just want to get somewhere dry and warm," she said feebly. "My boy is sick."

The journey for Ansari and thousands of asylum-seekers hoping to find sanctuary in rich European Union nations took a turn for the worse this week. The onset of fall weather in the Balkans sent temperatures plummeting and brought relentless rain and biting winds.

The weather spread despair among people on long and perilous journeys from war and poverty in the Middle East, Africa and Asia. Aid workers help the exhausted and the frightened, many with small children, like Ansari's boy.

The situation will get worse. Temperatures can drop below freezing as soon as November.

"The refugees are not used to this," said Davor Rako of the United Nations refugee agency. "They arrive here wearing shorts and no socks, shaking with cold."

Refugees from countries such as Syria, Iraq and Eritrea are used to warmth without sudden weather shifts. The majority passing through the Balkans started their months-long journeys in the summer, unaware it would take so long to reach Western Europe.

Many have travelled from Turkey to Greece, and then set off on foot, walking north to Macedonia and Serbia. Those with children, in particular, have needed extra time.

Several aid and medical groups were helping this week at Serbia's border with Croatia, offering hot soup and tea, food and water. Volunteers handed out rain ponchos and blankets.

More than 87,000 people have entered Croatia from Serbia in the past two weeks, and the flow is not expected to wane, part of a human wave of more than 500,000 so far this year. There are volunteers and aid groups, but they can only do so much.

Just a few hours spent near the border where migrants were crossing offered a searing snapshot of misery. As they lined up for warm drinks and food, the asylum-seekers blinked in the rain or kept their heads low. Some carried infants on one arm and plastic bags of belongings on the other.

Syed Ghadeer, a 16-year-old who travelled from Afghanistan, rolled up his trousers to the knees to avoid the mud, treading carefully on tiptoes.

"There is not so much rain in Afghanistan," he said.

A pregnant woman shivered with fever, covering her round belly with her hands and pushing through the crowd to reach a tent with doctors offering help. Children were crying, the tears on their faces mixing with raindrops on their cheeks. Those that cried the hardest had accidentally dropped their stuffed animals in the mud. They had to leave them behind, now too dirty to be carried on.