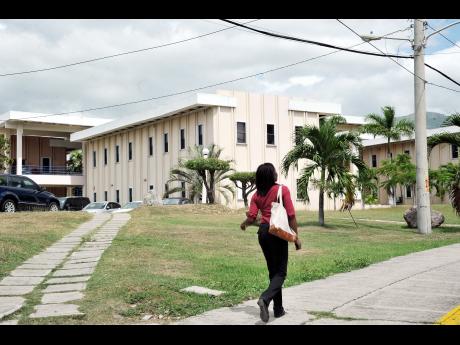 File Photo
In this file photo a student walks past the 'Peach Building' on the Mona campus of the University of the West Indies.

The National Water Commission (NWC) is silent on claims that it is allegedly breaching water pressure regulations set by the Office of Utilities Regulation (OUR).

The claims were made by the Mona Campus of the University of the West Indies (UWI) last week.

NWC's corporate communications manager, Charles Buchanan, told The Gleaner last night that the NWC has no public comment on the allegations.

The UWI made the claims last week following the NWC's assertion that current water problems affecting the campus are caused by internal distribution issues which fall under the institution's responsibility.

The university said that the NWC's explanation was not the full truth.

In a statement, director of communications at the Mona campus, Dr Carroll Edwards, said the water pressure on the campus varies from as high as 50 psi to 5psi.

And according to her, "it appears that the pressure at the point of entry to the campus is often below the minimum standard" set by the OUR.

The OUR's Statement on Quality of Standards Scheme states that the NWC "should maintain minimum/maximum water pressure ranging from 20 to 60psi."

The water issues at UWI, Mona, have angered students, who, recently bombarded the office of a student services manager.