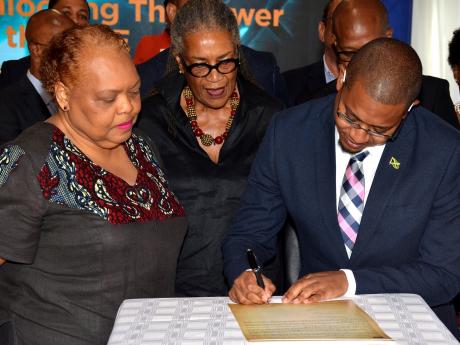 Minister of State in the Ministry of Industry and Commerce, Floyd Green (right), signs a Declaration of Interest to assist micro, small and medium-sized Enterprises during the Private Sector Organisation of Jamaica/Jamaica Bankers Association ‘Time for Growth: Unlocking the Power of the SME’ workshop held on July 3, 2018 at the Terra Nova All-Suite Hotel in St Andrew. Observing (from left) are Chief Executive Officer, Jamaica Business Development Corporation, Valerie Veira, and Chairman, Jamaica Association for Micro-Financing, Dr Blossom O’Meally-Nelson. - Contributed photo.

Owners of micro, small and medium-sized Enterprises (MSMEs) will soon be able to access loans for their businesses with help from the Government, at 4.75 per cent, one of the lowest interest rates that will be available on the market.

“The Government is now unveiling a new facility. We’re seeking to go to $600 million [in funds to lend entrepreneurs]. We’re going to start with $400 million that will be given to the EX-IM Bank to lend in the micro, medium and small enterprise sector, largely focusing on our manufacturers,” said Minister of State in the Ministry of Industry, Commerce, Agriculture and Fisheries, Floyd Green.

Green was speaking at a workshop dubbed ‘Time for Growth: Unlocking the Power of the SME’ at the Terra Nova All-Suite Hotel in St Andrew, July 3.

He said local manufacturers have complained that the current interest rates are high, and this is a major reason the Government has looked into offering these loans at special interest rates.

“Based on the discussions we had with the manufacturers, and based on the internal discussions with our MSME unit, we’re now looking to unveil that new facility at 4.75 per cent, which would be the lowest rate that the Government has ever put into the sector,” Green pointed out.

“We’re doing that mostly to send a signal that it can be done, but we will never have enough money as a government to lend to the sector, so the banks now have to come on board,” he added.

The ‘Time for Growth: Unlocking the Power of the SME’ workshop was held with the objective of highlighting the major roadblocks entrepreneurs are facing when they seek to access capital for growth and development.

The event was hosted by the Private Sector Organisation of Jamaica and the Jamaica Bankers Association.