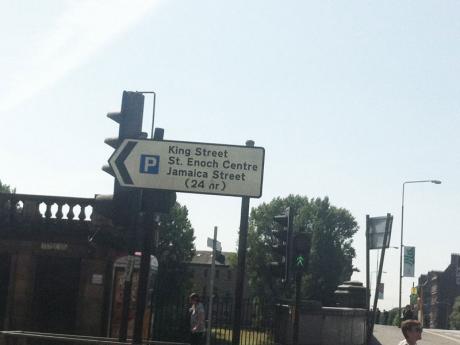 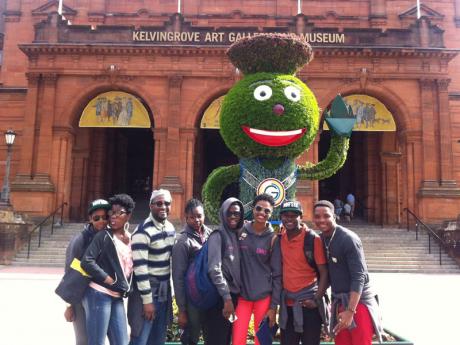 After their performance at the South Rotunda, the Jamaicans took some time to soak up a bit of Scottish history at the Kelvingrove Museum. 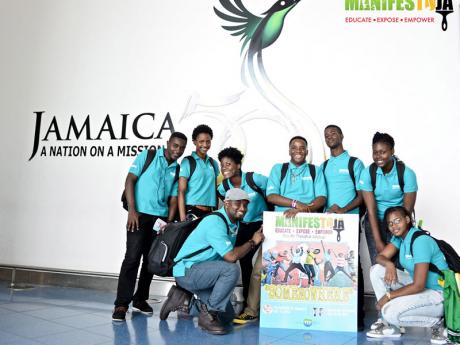 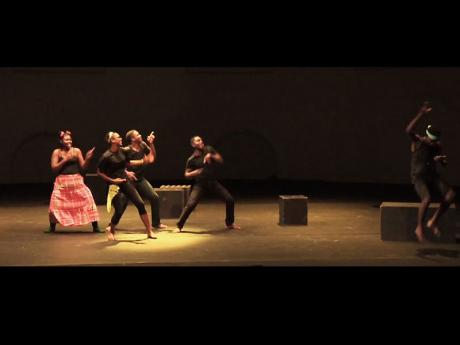 'Riddim', played by Renard Anderson (far right), is hearing a different tune from the one that his siblings are dancing to in 'SomeNoWhere'. 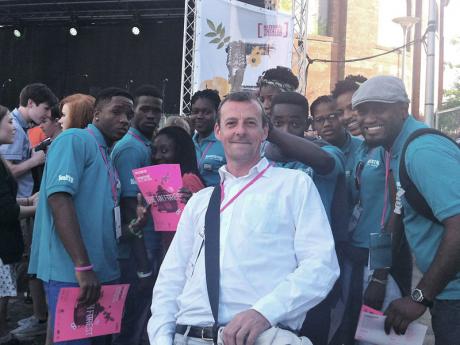 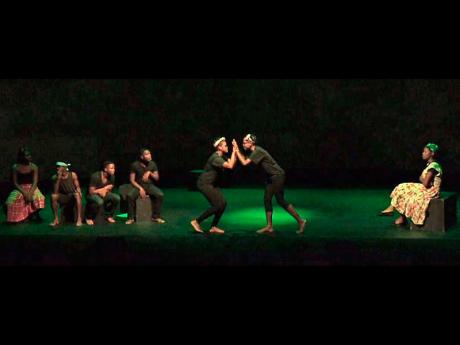 'Telly', played by Shaneil Orr (centre right) can always rely on the support of her imaginary sister, played by Paula-Gaye Donaldson (centre left), in 'SomeNoWhere'. 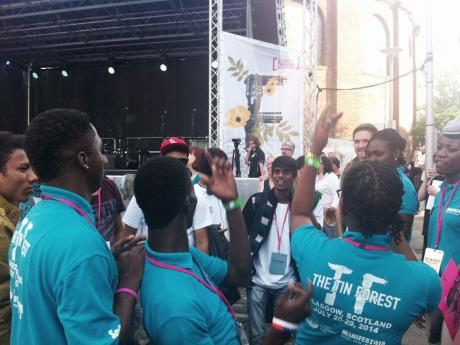 Scenes from a 'dance-off' between participants from Manifesto Jamaica and Yuva Ekta (from India) at the opening ceremony for the Tin Forest Theatre Festival.
1
2
3
4
5
6
7

Imagine yourself, a young person visiting another country and experiencing for the first time, not one, but several nations' cultures in an 'other-worldly' environment of original artistic expression, exchange and community.

Such was the experience of the group of 10 young thespians who represented Jamaica at the Tin Forest Theatre Festival this summer during the Commonwealth Games in Glasgow, Scotland. Their participation was through Manifesto Jamaica - the four-year-old non-profit organisation that has been using art and culture to connect youth and keep them focused on a positive educational path for personal and community development.

"I was surprised that I actually got the chance to visit another country at the age of 16," said Renée Jones, the youngest, who hails from Trench Town.

Manifesto Jamaica Managing Director Lesley-Ann Welsh said, "We are committed to employing innovative approaches to education that inspire youth, one by one, to mature into nation-builders." Her organisation believes that this should include travel and international exchange.

After months of rehearsal, backed by passionate, faith-filled pursuit of funding, the group dubbed 'Team Tin Forest Jamaica' made it to Glasgow to perform its piece titled SomeNoWhere, thanks to the support of scores of individual donors, the Tourism Enhancement Fund, RISE Life Management Services, British Airways, Total Travel Services, the Institute of Jamaica, GraceKennedy Foods, Lithographic Printers, and patrons of their debut home performance.

There were multiple dimensions of learning along the way. The most crucial extended beyond theatre.

Upon reaching Glasgow on July 20, the group immediately immersed itself in the intense schedule organised by the National Theatre of Scotland. They also managed to carve out time to do a little exploration of Scottish heritage on their own.

"From the moment we arrived, it was amazing! I was surprised to know that people are so crazy about Jamaicans. Being a Jamaican is a blessing," said Paula-Gaye Donaldson, who is from Fletcher's Land.

At the centre of their 10-day visit were living quarters (literally located on Jamaica Street) shared with youth theatre practitioners from Bangladesh, England, Malta, India, Scotland, and New Zealand. The arrangement ensured that each participant lived, dined, and worked side-by-side with representatives from other territories. The Jamaicans quickly drew close to the Indians after having a dance-off with them at the opening ceremony, as well as to the Maltese, who thrived amid all the energy.

Shledon Kelly, an outstanding rubgy player from Fletcher's Land, says that his self-worth has grown. Although he voluntarily helps out with the sports programme at his alma mater, St George's College, he really didn't think of himself as much before. "My perception of everything has changed," he said. The idea is now rooted in him that "even though you're just one person, you can effect a change, so you should open up more to the possibilities, to the environment and to people". The Bangladeshis taught him that "to not open up is to let your spirit die".

"I am definitely changed," said Jones. "I've spent all my life relating to people in my family and community. I've never had to relate to new people before. I found that I learned a lot about myself and I grew. Before, I would tend to judge a book by its cover. It's not about the exterior anymore. It's about the interior."

Renard Anderson, another team member from Trench Town, said. "We all came to realise that we have more in common than we have differences between us." Donaldson added, saying, "The same issues are being faced everywhere." Jodean Tapper, an Edna Manley College of the Visual and Performing Arts (EMCVPA) graduate originating from Portland, said, "We got a chance to see how others dealt with them."

And so the differences became fascinating. From the living statues across the city of Glasgow to the full-scale theatrical performances at the South Rotunda, the young Jamaicans were moved by how people, worldwide, use the arts as a means of self-discovery, storytelling and even escape. As Tapper put it, the arts are "tools which helpThe theatre
groups were all required to deliver day-time workshops on aspects of
their country's culture. Manifesto Jamaica's workshops were
oversubscribed.

Most of the festival goers were
persons from eastern parts of the world. They were thrilled to get
hands-on experience of Jamaica's language, dance, and food. "Imagine a
person from Malta saying 'Mi love mi breadfruit' and doing dub poetry.
They've never seen a breadfruit before but they're dubbing on key and in
rhythm!" exclaimed Shaun Drysdale, director of
SomeNoWhere. Both he and his co-director, Randy
McLaren, are award-winning dub- and spoken-word
poets.

During their preparations, the group had
consulted with Frederick 'Tippa' Moncrieffe on the connections between
traditional Jamaican dance forms and contemporary dancehall moves and
their general approach to delivering the workshops. "They were so
interested, so engaged in the dancing! It was all fun," Drysdale added
as he recalled the reactions.

The attendees just couldn't get their fill of
traditional Jamaican snacks either. Even after the workshops, Team Tin
Forest Jamaica was being cornered for banana
chips.

The excitement culminated with the performance
of SomeNoWhere at the South Rotunda on July 27. The
production was the team's interpretation of the Tin Forest theme 'From
Nowhere to Somewhere'.

Drysdale reflected that right
up to the final rehearsal, he had to dig deep to "get everyone into a
spiritual space, where it was no longer about remembering lines or
standing in the right place, it was about connecting with each other".
McLaren added more context at the beginning, in keeping with suggestions
received back home.

It worked. The South Rotunda was
totally enthralled and clearly able to navigate through the patois. At
one point, a lighting technician, mesmerised by the performance, missed
his cue for the first and only time, and, at the curtain call, the
Jamaicans received a thunderous, multi-national standing
ovation.

"I thank Shaun for leading us to find so much
in us that we didn't even know was there," says Tapper. "The process
was really what meant so much. It was everything that we went through to
reach our final product that made it so interesting and
exciting."

Shaneil Orr, a graduate of the EMCVPA and
Portland native, says her most memorable moment was just before she went
on stage. "I came to the realisation that theatre is my 'somewhere',"
she said.

Donaldson, who played Orr's imaginary sister
in the production, believes that her 'somewhere' is social work. "I'm
going to see how best I can fit what I've learned from this entire
experience into my studies," she said.

Manifesto
Jamaica is eager for more development partners serious about innovative
approaches to education to come on board to support a series of local
performances of 'SomeNoWhere'. The 50-minute playlet seeks to encourage a
greater level of regard for orphans and to motivate all young people to
stand confidently in the heritage of their ancestors and diligently
pursue their goals. Project Manager Natalia Welsh indicated that the
cast and crew are especially eager to perform for schools and children's
homes.

Let's hope that corporate Jamaica will take
Kelly's words to heart when he says the key lesson he took away from
Glasgow was "evolution and revolution".

Kelly warns,
"Don't stay dormant because things and times will change, so your mind
has to change as well. It's up to you to evolve and revolutionise your
thoughts and the way you do
things."