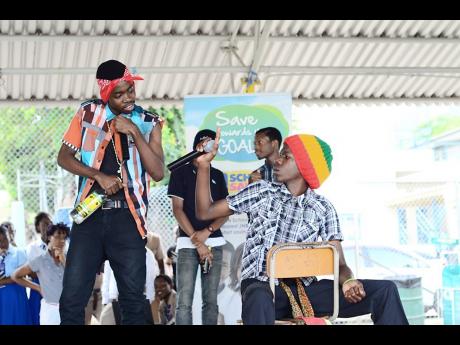 Contributed
“Though this be madness, yet there is method in it”: Papine High perform their Jamaicanised version of the Shakespeare play ‘Hamlet'. 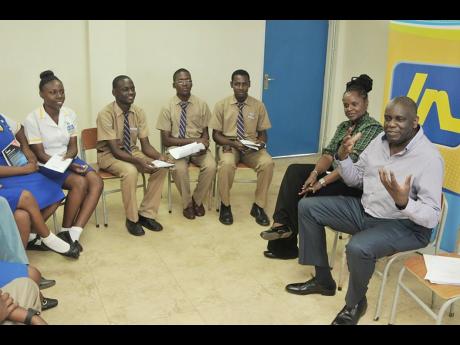 Contributed
Dr Tony Sewell (right) talks with participants in the Jamaica National Shakespeare Schools’ Competition from the combined teams of Kingston College and St Hugh’s during a visit with schools prior to start of the competition. Beside Dr Sewell is Dr Renée Rattray, director, education programmes, JN Foundation. 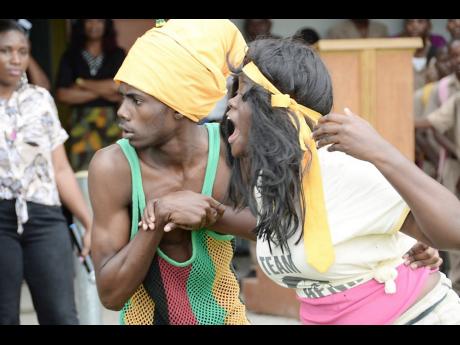 The Tempest, William Shakespeare's swansong play, is set on bewitchingly beautiful island of yellow sands, wild waves and coral seas. The isle is 'full of noises, sounds and sweet airs, that give delight and hurt not'. How Shakespeare would have fallen in love with my homeland Jamaica had he ever made the sea voyage.

Next year is the 400th anniversary of the death of William Shakespeare. We will get the usual 'Shakespeare season' at the Globe theatre in Southwark, at the RSC in Stratford-upon-Avon and on the BBC, each giving the Bard the adoration he deserves. It is too easy to forget, though, as we celebrate our greatest national literary hero, that he is revered all over the world and not just on our own island.

As an Englishman of Jamaican parentage, I wanted to mark the centenary with productions of his plays in schools across Jamaica. Not productions of 'Hamlet: The Reggae Musical', but inventive, thoughtful, witty retellings that would add to our students' understanding of the plays.

The aim of the Jamaican Shakespeare School Championship is to find a new and inspiringly original production of Twelfth Night, The Taming of the Shrew, or King Lear. The winning school will be awarded a trip next year to London and the opportunity to perform at the Globe Theatre. I can't wait to see a Jamaican youth production of Romeo and Juliet or The Merchant of Venice play to a packed house on London's South Bank.

First round of plays

In early July, we had the first round with 11 high schools performing their Shakespeare plays. These 30-minute renditions have not compromised on Shakespeare's original and powerful language. Indeed, the language has been enhanced by rich Jamaican intonations. We have only asked that the plays be set in a Jamaican context. I have been awed by the pupils' many different, enlightening and creative responses.

Hundreds of 14-year-olds from August Town to Portmore are producing spectacular art. Papine High School has their Hamlet as a Rastaman. The Rastafarians are famously known for their dreadlocks, believe in a black God which is Haile Selassie, former ruler of Ethiopia. They see themselves as black Jews, with a similar narrative to their Jewish counterparts. Papine's Rasta Hamlet takes arms against a sea of troubles and, in the process, destroys all around him. Similarly, Kingston College and St Hugh's have reimagined the Jewish Shylock as a Rastaman who is a victim of a world that is against him, yet also greedy for his pound of flesh.

To pupils brought up on the reggae music of flawed and great heroes like Bob Marley, Peter Tosh, and Vybz Kartel, the struggling heroes of Shakespeare - Hamlet, Shylock, Macbeth, King Lear, each fired by righteous rage - are fascinating characters.

The students have shown how truly universal the Bard is. The plays slot neatly into a Jamaican context and the language trips smoothly from a Jamaican tongue, giving it new meaning and rich resonance.

Jamaica has suffered from the perception that it has fostered an anti-reading culture, particularly among boys. When the sprint hero Usain Bolt was recently asked what books he would take if packing for a long flight, he boasted that he didn't like reading and preferred his video games. The Schools Championship, sponsored by the Jamaican National Building Society, is sending a message that Jamaicans can also run a good race when it comes to the great works of Shakespeare.

It is a tragedy that, as far back as the 19th century, Shakespeare has been wrongly seen in Jamaica as the preserve of an elite literati, often confined to inaccessible theatres, out of the price range of ordinary people. This was never the intention of the great playwright; he wrote not only for rich patrons but for ordinary, dirt-poor people. His London base in Southwark, London, was home to knaves, rogues, whores, cut-throats, and, in Shakespeare's quotable phrase: "loathsome toads".

Shakespeare assumed knowledge of the Classics among his audience. In Jamaica, most people have a working knowledge of the Bible and its stories. Through the Church and reggae, they have been given a classical education, not dissimilar to that of the Elizabethans.

When I taught Shakespeare at Knox College in Jamaica in the 1980s, all of my students scored the top grades. They performed the texts and I used their biblical knowledge to help explain the themes and allusions of the plays. My class in Jamaica loved Shakespeare; whereas when I moved to the UK, my students found him hard work.

I have mostly talked of the tragedies - the Hamlets, the Macbeths - but I never let my pupils forget that Shakespeare was a great comic. He would have found both humour and pathos in the class divisions we have in Jamaica. He would have loved the so called 'mix-up business' in Jamaica where an attempt to unravel a complex situation leads to even more complexity and madness.

There are some who say that poor black people - rich ones, too - should run a mile from Shakespeare; that he represents an unsavoury aspect of colonialism. I say we shouldn't let political sensitivities deprive us of the beauty of his language or the sheer verve and energy of his characters and plots.

What we must do with Shakespeare is what the young people in Papine High and Waterford schools have done: they have captured the god of their former captives and found a Jamaican home for some wonderful plays.

- Dr Tony Sewell is the director of the JN Jamaican Shakespeare Schools Championship and Chief Executive Officer of Generating Genius.