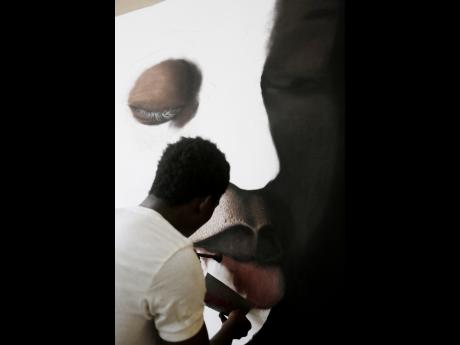 AP
Babajide Olatunji, put a finish touches on one of his tribal marks art works at his studio in Ile-Ife Nigeria. 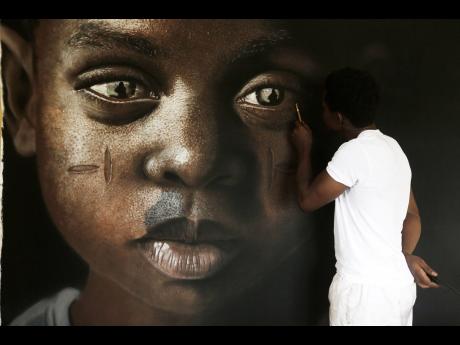 AP
In this Photo taken Friday, May. 1, 2015, Babajide Olatunji, adds final details to one of his tribal marks art works at his studio in Ile-Ife, Nigeria.
1
2

Babajide Olatunji sold his first portrait for about $7. Seven years later, his charcoal renderings of faces with tribal markings sell for thousands of dollars.

This 24-year-old's success is part of a new global recognition of the value of contemporary African art.

"It's the new 'Scramble for Africa', no longer for land, gold or diamonds, but for art," said Giles Peppiatt, who holds the only auctions of modern African art outside the continent, at Bonham's in London.

"It's a rather different kind of tussle that is making art a viable occupation for artists across Africa," he said.

Nigeria, with the continent's largest economy and population, is leading the art field, too, with a host of established and up-and-coming painters, sculptors, printmakers, potters, photographers, glass and bead workers, and batik masters.

Olatunji struggled through art school, with help from his mother, who runs a small grocery stall from her home. He managed to sell some portraits. "But some days, I went to college on an empty stomach," he told The Associated Press at his apartment-studio in Ile-Ife, a city about 200 kilometres (125 miles) northeast of Lagos, the commercial capital, that is one of several art centres in Nigeria.

The artistic success of this West African nation better known as the continent's biggest oil producer is no surprise to Adhiambo Odaga, who promoted the work of Nigerian artists when she headed the country office of the Ford Foundation.

"It's all part of the 'Africa rising' narrative and I don't think you should divorce it from the increasing interest in investment in Africa," she said.

For a century, African art was belittled. As late as 1994, poet and writer Okwui Enwezor bemoaned the fact that "The most enduring myth of all ... is the specious assertion by many in the Western art establishments, that there really is no such thing as modern art from Africa."

Enwezor, a Nigerian, this year, became the first African to curate the Venice Biennale.

Honoured there was El Anatsui, the Ghanaian-born rock star of African art, who has long lived in Nigeria and received the Gold Lion for Lifetime Achievement. Anatsui's work, spanning a nearly 50-year career as a sculptor and art professor, won international acclaim at the 2007 Biennale when he draped the facade of the Palazzo Fortuny with a magisterial glimmer from thousands of whisky bottle caps stitched together with copper wire.

Using recycled materials linked to liquor, which played an important role in the economy of the slave trade, Anatsui has created works that resemble Ghana's royal kente cloth, carrying a complicated message typical of African art.

Art has always been an integral part of African life, from elaborate pottery, wooden masks sometimes worked with beads or beaten bronze to fabrics of hand-woven silks, linens and cottons coloured with plant dyes.

The sculptor and painter Ben Enwonwu, considered a pioneer of modern art in Nigeria, was the first African commissioned by Britain's Queen Elizabeth II to do a bust, for which she sat during a 1956 visit to the West African nation.

Works by the now deceased Enwonwu and Anatsui were the best sellers at Bonham's "Africa Now!" auction in May, breaking new records, according to Peppiatt.

Olatunji, the budding artist, said he likes to represent ordinary people with the tribal markings that are becoming a thing of the past.

"It can be the young girl selling water, a fleeting glance at someone in the street, then I fashion a story around them," he said, describing his desire to capture "the morphological characteristics" he sees from years of studying faces.

To create the haunting portraits he uses shavings from charcoal and pastel chalks. Working on a piece of paper covering half a wall, he turns on some jazz and dances around his new work.