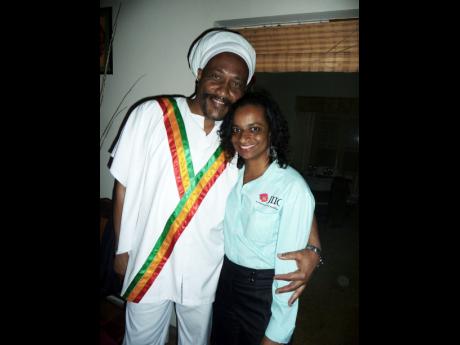 Rasbert Turner
Yasus Afari (left) and Elizabeth Chung, marketing manager for Jamaica International Insurance Company, as they cool out at Poetry in Motion in Mandeville, Manchester, in 2010. 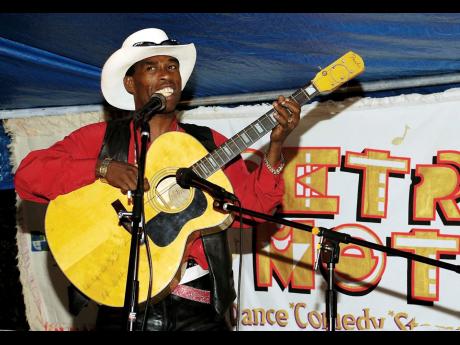 Colin Hamilton
Singer Brushy One String strums his guitar onstage at Poetry In Motion at the Vineyard in Mandeville, Manchester, in 2007. 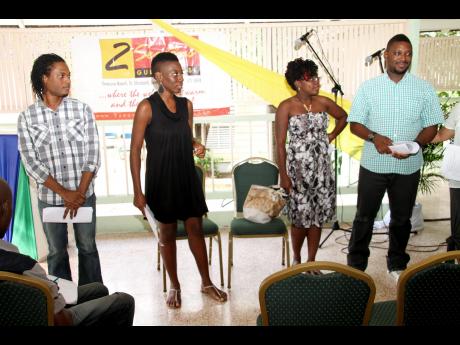 While there is a distinct pleasure in reading poetry, there is also the joy of hearing the writer read his or her work. Often during a reading, the poem is given a context within the writer's personal experiences or the general social circumstances that prompted it and the cadence of the reader's voice, emphasis on particular words and the pause that holds tremendous significance.

A number of events dedicated to poetry or including a high proportion of poets reading their work, as well as that of other writers, have provided the interactive experience where poet meets audience, most times, up close and personal. With a varied slate of individual organisers, some have lasted and others have faded, offering different levels of quality.

And while the audience size varies, one thing is certain - there has always been and will always be someone to listen in a culture where the oral tradition is as important as the written. Among the events which have been staged with some regularity are:

n The Calabash International Literary Festival. Having grown from the front yard of Jake's in Treasure Beach, St Elizabeth, to an extended tent set up on a large open field near the hotel, the festival is an institution staged from Friday afternoon to Sunday evening. Call it the 'best little festival in the best little district in the best little island', or the 'greatest little festival in the greatest little district in the greatest little island', the thousands who attended annually through the first decade of the new millennium, then every two years since, simply call it Calabash and that says it all. Most recent staging, 2014. Next time around, 2016.

n Two Seasons Talking Trees Literary Fiesta. Also based in Treasure Beach, Talking Trees has had the distinction of also being staged in Kingston, making a stop at the University of Technology, Jamaica, in 2014. This year, though, it was back to its roots in the St Elizabeth community, when the one-day event was staged on May 23.

n The Poetry Society of Jamaica monthly fellowships. For more than a quarter century, the Poetry Society of Jamaica has been hosting gatherings at the Drama School Amphitheatre, Edna Manley College of the Visual and Performing Arts, on the last Tuesday of each month. It has become a space to hear the established and the upcoming, the deeply crafted and the lighthearted. The guest for the July 2015 staging last Tuesday was Millicent Graham, author of The Damp in Things and The Way Home.

n Redbones Literary Night and annual awards. Each month, the Redbones Blues CafÈ in New Kingston stages a literary night for the first 10 months of the year. Then at the end of each season, the Annual Writers Awards are staged, with writers taken from the year's monthly readings assessed by a panel of judges. This November will be the 15th staging of the awards.

n Dis Poem Wordz and Agro Festival. The festival, named after Mutabaruka's well-known Dis Poem, is staged annually in Portland. For this year's fifth staging in late May, it moved from the 2014 location in Hope Bay to Port Antonio and had an expanded international component.

n Love Affair With Lit. The now-standard opening event for Kingston Book Week in March, the Love Affair is held at N1, the Neville Hall Lecture Theatre, University of the West Indies, Mona.

n Seh Sup'm. A combination of acoustic music performance and poetry, Seh Sup'm has been staged at various venues, having a long run at the Orchid Village. Often held with a charitable focus, the next staging of Seh Sup'm is on Saturday, August 29, at Redbones Blues CafÈ in support of the Turn Around Project, which is based in Portland.

n Poetry in Motion. At the Mandeville, Manchester, event, fashion and music meet poetry in the laid-back mid-island town. In February, it had its 12th annual staging.

Four other events which have been held give an indication of how far poetry had reached across the island - Independent Voyces which has been held at Robin's Bay in St Mary; Asante Adonail Literary Lyme in St Ann; Kingston Pon Di River which was held at Boone Hall Oasis before a Hope Gardens staging; and, in St James, poetry at Ellis Piece.