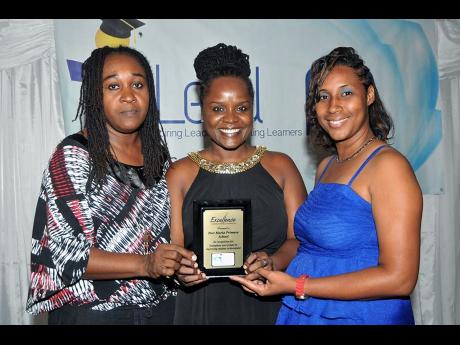 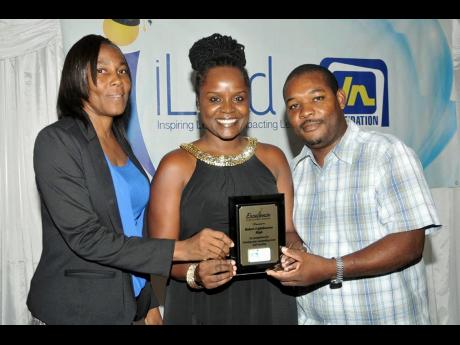 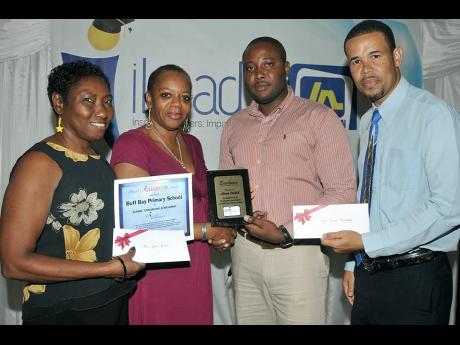 The winning Buff Bay Primary team, June Dobbs (left), acting principal; Alton Dekid (second right), education officer, Region Two; and Duval Wyndham, vice-principal, accept their awards and certificates for emerging at the end of the year as the most improved school in terms of its management and academic performance in the JN Foundation’s iLead programme. Presenting the awards is Gillian Chambers, management consultant to the iLead team.
1
2
3

Buff Bay Primary, in the town of the same name, in the parish of Portland, walked away with the top prize for the school which achieved the most improvement in its management and academic performance during year one of the JN Foundation's iLead education leadership programme.

The award was presented to the school at a ceremony held at the Altamont Court Hotel in New Kingston recently.

"All the schools showed tremendous progress over the past year; however, Buff Bay stood out as an exemplary team, implementing various administrative, teaching and learning strategies, which have impacted positively on discipline and punctuality, as well as student performance," said Dr RenÈe Rattray, director, education programmes at the JN Foundation.

"The schools, including Buff Bay, still have a far way to go to improve the quality of their leadership, management and student performance; however, the incremental successes and enthusiasm have been impressive," Dr Rattray said.

Buff Bay Primary is one of five schools in year one of the iLead programme. The change management initiative has been working in select schools in Portland, St Mary and St Thomas, which were cited by the National Education Inspectorate as being in need of critical support.

Consequently, the iLead Programme is being implemented, to build their leadership capacity and improve student performance through improved teaching; as well as create an enhanced school environment. The project is being carried out in tandem with the Ministry of Education.

The participating schools are: Brimmer Vale High, Islington High and Port Maria Primary in St Mary; Buff Bay Primary in Portland; and Robert Lightbourne High in St Thomas. And they have all recorded significant improvements in management and leadership, which have impacted student performance.

"Since September, we've implemented a Turnaround Plan for the school leadership that has been influencing the school's culture and impacting teaching and learning," acting principal of Buff Bay Primary, June Dobbs, disclosed.

"This plan resulted in a change of attitude in both our administrators and educators. It also included the parent body, as they were sensitised through the Parent-Teacher Association about the new policies being implemented and the role they could play," she stated.

The strategies had particular impact on punctuality at the institution, and students' numeracy and literacy levels. Overall, literacy improved by some 40 per cent among grade four students, following strategies created and implemented by the school under the guidance of the iLead team.

More than 15 students of the cohort, which also sat the Grade Six Achievement Test, scored above 92 per cent across all subject areas this year.

"More accountability is taking place," Mrs Dobbs noted. "Our middle managers, who are our senior teachers with supervisory roles, are more cognisant of the fact that I am a part of the management team; and my role is to see that plans put in place are being implemented, not to watch them being put into place and to criticise.

"More importance was given to punctuality, as staff members realised that managing time matters; and everyone needed to respond to the bell and get to class on time," Mrs Dobbs explained.

She said planning sessions have also been strengthened; consequently, the time allotted to sessions were extended, so that teachers have more time to share ideas with each other, based on observation and data.

The four other schools in the iLead Programme also received awards. Robert Lightbourne High received an award for effectively engaging its stakeholders through a town hall meeting; Islington High was awarded for being the school which was best at leveraging its community stakeholders. Brimmer Vale High was awarded for the turnaround in school culture; and Port Maria High recognised for its use of data to improve overall student achievement.