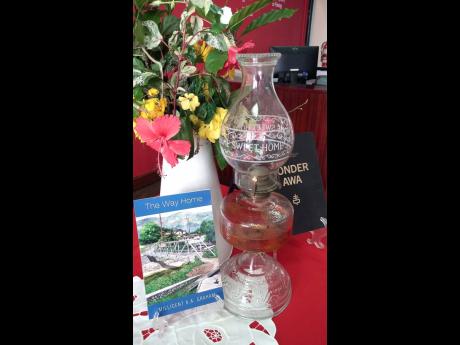 The Way Home is a personal odyssey, the poet's journeys but she has made her journeys ours; jogging our memories every inch and hugging us close with our common nostalgia. We give thanks for memory, the senior gift.

Home is family and hurt and heart; home is history and culture; and throughout, wistful regret etched delicately on walls and in spaces where things we knew once had their being. The memories are all hers and all ours from the very beginning with the opening poem "Walls".

"An old house bows to a progressive design" she understates and "progressive" is perhaps meant to be sarcastic. She sends us reeling to structures that dwell now only in memory. That picture is a metaphor for so much loss. She is forcing us to tears for a beautiful old house and other houses like it. We see fretwork and steps leading to a wide veranda replaced now by beehives of apartment buildings and Town Houses.

Home is loss and hurt up close and personal. The personal is public.

"I watched the fog of floating conversations...

and lost one brother to the posse's paved climb...

a father's favourite son/ who abandoned the lignum vitae/ for a block some new contractor laid..."

In the title poem "The Way Home" Home is, among other things, a small child falling down and having her knees look like fallen naseberries or watching a bully steal from her brother and herself

"A big girl came, drowning in a tunic/ dark as the sea, and reached/for my brother's Geometry set.

Later, in the poem "In transit" there is loss of a lover or friend

"When did your hand slip out of mine...

I can't believe I lost you/Never felt you go"

This poet takes us to places we sometimes do not wish to go but takes us there gently so we can manage...

Home is insecurity/ fear as in "Prayer for morning"

"Lock up the louvre, latch the grill gate...

The outside shadows secrets keep/ so mind the door, and fight off sleep..."

But the poet does not leave us comfortless. There is a greater power that keeps us safe

"So Clasp your hands, and say your prayer/Please let the morning find you here"

Home is history and culture. Jamaica is everywhere

Within the collection there are many local others including insects whose home names we may have forgotten: Nannies, Daddy Long Legs etc. etc. "Christmas was..." includes the "kitchen bitch" one of our older lanterns lighting games where winnings were "veined kidney pegs of tangerine" There is folk medicine in "Catadupa" once a village/town now a mere tourist stop.

"No one is sick today. The chainey root/and raw-moon bush have caused the pot-water to rise"

"Funny how the school is empty, still/Machines derail and birds decay

These lines hold on to the silence but remember a time when the railway brought trains with their chugging and the trees held birds and their singing. All of that is about the content the poet brings to us; and now a bit on the poet's style.

The long poem "Kendal" is about a national event this poet can only have heard of or read about: that major Train derailment in 1957. There are seven sonnet-length pieces looped one to the other.

"my steam billows away, a gray stampede"

The next piece "Choir" begins

"Kendal, waking us in our sleeping homes"

The next "Reggae for Lee Scratch Perry" begins

This links up with "Reaper" with the line " A feeling comes like smoke scratching the throat" .

,"They watched shadows, jumbled in the station"

Are those shadows also "shades" another word for dead people or ghosts, casualties of the tragedy? The people watching are the porters hanging about playing dominoes

Red caps waiting, four at a time "fritter time till they/must bear the burdens of arriving souls away" They will bear away bodies which are already souls. These double meanings mark a kind of economy in the use of words.

The Way Home is Millicent Graham's sophomore collection published with Peepal Tree Press. The above is an abridged version of its official launch address by writer and academic Dr Velma Pollard at the National Gallery.