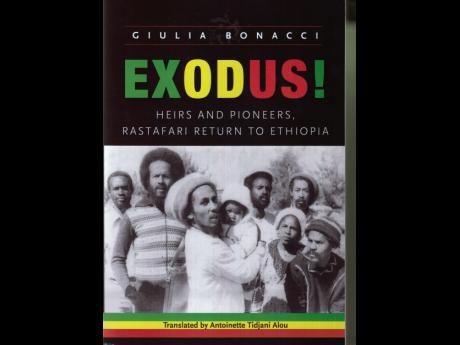 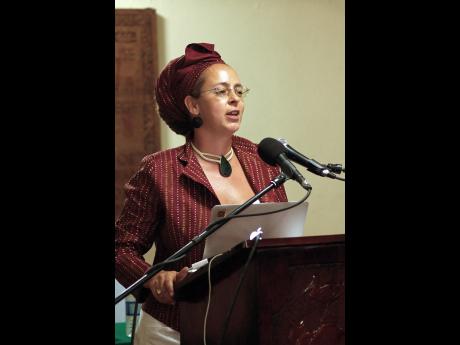 Sometimes the expression, 'Treasure trove of information' is overstated, a mere hyperbole. Not so in this case. Giulia Bonacci's Exodus: Heirs and Pioneers, Rastafari Return to Ethiopia is a qualitative opus; original, exhaustive, and scholastically delivered.

The return to Africa phenomenon is hardly new. But for the most part, it was 'sloganised' in protests; and arguably, a knee-jerk response to ubiquitous poverty and injustice that shadowed millions of blacks after slavery.

Bonacci adds a psychoanalytical element to the historical and sociological currents of her work.

She speaks to the psychic, archetypal, and generational wounds that refuse to heal. At the outset, we get a vivid picture of a kind of diasporic limbo. There are also accounts of fantastical, post-mortem flights to Africa, along with dietary prescriptions believed to lighten the burden of such travels.

In essence, Exodus borders on soul therapy. It hinges on mysticism, imagination, and esotericism. Here, history is indissolubly tied to providence and cosmology.

Redemption is rooted in Ethiopia, trumping Nova Scotia, Liberia, and Sierra Leone as other viable options. But why the veneration of Ethiopia?

Ethiopia, we learn, is more than a geographic location.

It is a cultural and spiritual sanatorium, without borders. Ethiopianism is embedded in multiple layers of the African mind. In many ways, it transcends culture. It is a profound concept bearing soteriological and eschatological significance. Ethiopia is sealed in biblical prophecy. It has always been black, from its very cradle; and thus, the definitive sanctuary for the black diaspora.

She writes, "The books of the prophets mentioned Ethiopians; thus Jeremiah in his oracles enquires: 'Can the Ethiopian change his skin, or a leopard his spots?' (Jeremiah 13:23) ... And the prophet Amos continued: 'Are ye not as the children of the Ethiopians unto me, O children of Israel?'"

(These) references, in Genesis, Exodus, the Song of Solomon, the Prophets and the Acts of the Apostles are but a few among the many references to Ethiopia, "that crystallised in Psalm 68:3," that states: "Princes shall come out of Egypt; Ethiopia shall soon stretch out her hands unto God."

Any like thesis on the African diaspora must examine the revolutionary feats of Marcus Garvey. And faithful to tradition, Bonacci recounts Garvey's famous words: "We, as negroes have found a new ideal ... We have only now started out (late though it be) to see God through our own spectacle. ...We negroes believe in the God of Ethiopia, the everlasting God ... ."

But there were other trailblazers bent on marshalling the wounded to a more accommodating abode - be it imagined or real. And Bonacci takes note.

Paul Cuffee, Martin R. Delay, and Edward W. Blyden are just a few of the names mentioned. However, the apogee of repatriation is tied to the cultural and millenarian vision of Rastafarians, who many saw as a reactionary outfit that consciously eroded nationalism.

But the onslaught of colonialism transformed the image and internal dynamics of Ethiopia. It was a transitional period that Bonacci ably details. She pens, "At the beginning of the 19th century, European interest in Ethiopia was renewed through the interrelated commercial, missionary and scientific enterprises which began to arrive in the region."

Bonacci chronicles the global dynamics leading to Italy's military thrust into Ethiopia. The victory of Adwa over that European nation in 1896, and the preservation of the territorial integrity of Ethiopia, according to Bonacci, added to its legend. Ethiopia emerged as a veritable bastion of resistance against colonialism. The new Ethiopia bore all the mystique of its 'fore-parent'. Modern Ethiopianism and the Ethiopia of yore were indivisible.

Weighed down by poverty, many in the Caribbean, Bonacci argues, became disillusioned and radicalised. Jamaica became the fulcrum of the 'Ethiopian movement', with the likes of Leonard Howell at the helm. The proliferation of divine literature (The Promise Key), and a Universal National Anthem and Prayer, became part of an irrevocable cosmic and providential melange that were irresistible. The contributions of Prince Emmanuel; the controversial Reverend Cladius Henry; a land grant, accounting for 1,000 acres; and the Parousia of Haile Selassie I to Jamaica in the 1970s proved propitious for a growing Rastafarian movement bent on "reversing the image of Africans ... ."

It followed that "the black body was asserted as the site of divinity and thus consecrated", with all accompanying customs and rituals.

And while parallels have been made to the return of Jews to Israel, Ethiopia bears a starkly different configuration. Zionism, through the Israeli prism is political, confrontational - miles apart from the Shashemene construct.

But the rise of fascism and the defeat of Ethiopia in 1936 by Mussolini's forces marked a new chapter in black politics. The people of the Caribbean and black Americans rallied around the beleaguered black state and this animus may have ignited social unrest in these part. Bonacci pens, "In 1938, driven by Garveyite nationalism exacerbated by the Italo-Ethiopian war, great revolts shook Jamaica ... and the poor of all walks of life took up arms to demand better working conditions and increased wages."

Ethiopia's candidature and eventual membership in the League of Nations cemented its stature among blacks on every continent. And Shashemene in Ethiopia, bequeathed by Haile Selassie I, assumed divine, existential significance.

Part 2: The fall of Haile Selassie and its impact on Shashemene, the author's final assessment on repatriation, and the reviewer's closing comments will be featured on Sunday, September 13.