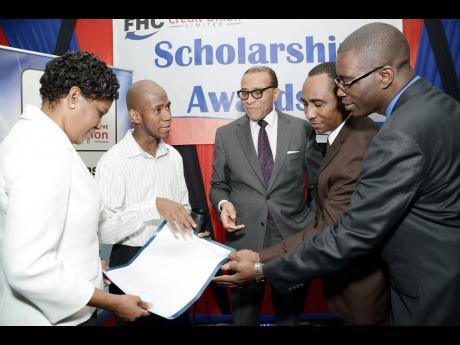 George Henry from Northern Caribbean University (NCU) is about to see his dream become a reality. The dream, 'Inventive Learner', which goes live for a trial run this month, is a social game-based-learning management system offering a modern twist to teaching.

Recognising that individuals learn differently, 28-year-old Henry is using 21st-century technology to ensure improved academic success in the classroom. But his own success, he partly attributes to the First Heritage Co-operative Credit Union's (FHC) $300,000 Entrepreneurship Grant, which has assisted him towards take-off.

FHC again set ablaze many persons' desire for self-growth at its 2015 awards ceremony held recently at the Knutsford Court Hotel, where the credit union issued a $300,000 business grant to Giovanni Maddix, owner of UBoards, an enterprise that produces paper-based whiteboards that are portable, lighter, and more flexible than the standard whiteboard.

"One of my goals on completing school was to have a business. Yet, I was certain that I didn't want to start with a loan. I was very driven to figure out how to secure equity capital in the business," Giovanni Maddix, winner of the FHC Entrepreneurship Grant, shared with guests at the ceremony.

Maddix outlined that his business was two years in the making. The business concept was based on the need to constantly adjust and amend his ideas based on feedback from experts as well as valuable feedback from Basil Naar, FHC's CEO.

"I can't explain to you the joy I feel when I talk with these young people and hear their business ideas, many of which have the potential to be million-dollar companies, but then I look around and realise that graduates leaving universities pursuing entrepreneurship have access to little or no funding. As a person passionate about young Jamaicans fulfilling their career aspirations, I decided that something had to be done, and so we instituted the FHC Entrepreneurship Awards Programme as far back as 2006. We pioneered the entrepreneurship thrust, knowing that entrepreneurship is instrumental in job creation and economic development," Naar said.

"This programme," Naar said, "supports FHC's mandate towards the quest of nation building and the growth of new SMEs while enhancing the welfare of its members and the communities in which the company operates."

"The entrepreneurship grant also equips us to build relationships with the youth, creating and sustaining membership

loyalty and revenue generation in the long term," Naar said. Since its inception in 2006, 28 grants have been awarded.

Brian Lumley, award-winning chef and guest speaker at the awards ceremony, shared with the audience where his desire to become an entrepreneur originated.

"Entrepreneurship came as second nature for me because (while) growing up, my mom, who worked at the airport at the time, used to sell gift baskets for Valentine's Day or Mother's Day just so that we could get a little bit of extra cash to spend at Christmas. So I had to mimic her. In college in my third year at HEART, I started my company, Foodie Focused Limited ... . If I knew then about one of these grants, this would have filled a gap, a huge void. Therefore, I commend FHC for providing a scholarship like this."

opportunities to secondary and tertiary students through the YOUTH Savings Programme as well as the annual FHC GSAT and Tertiary Scholarships. Additionally, FHC awarded 17 GSAT and tertiary scholarships at the ceremony to selected youth savers of the credit union who have maintained a minimum B average.

Gizelle Mowatt, a full-time International University of the Caribbean media and communications student, shared her testimony: "We each have our personal struggles. These scholarships are more than just tuition, far more than just money. Many of us were on our last leg, desperate, but each filled with our dreams and still facing the obstacles of insufficient finances. The FHC Foundation has given us hope, a reignited commitment to excellence, and the will to be a blessing to others."

This year, the FHC Foundation awarded grants and scholarships to students who excelled at the highest levels while vowing to continue its efforts in the years to come.