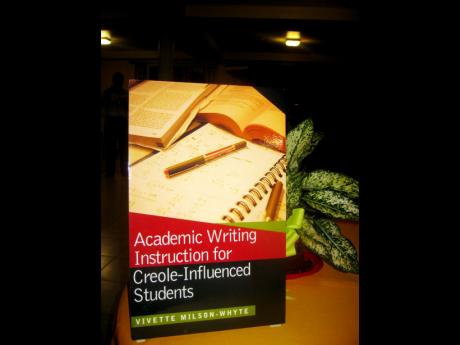 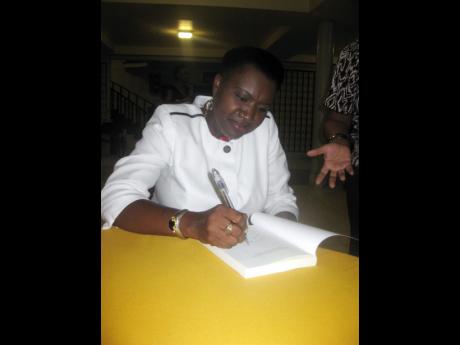 Mel Cooke
Dr Vivette Milson-Whyte signs a copy of her book, 'Academic Writing For Creole-Influenced Students' at the UWI, Mona's Undercroft at the recent launch of the publication.
1
2

At the recent launch of Academic Writing for Creole-Influenced Students, author Dr Vivette Milson-Whyte included her experiences as a student in establishing the book's context.

The launch was held at the Undercroft at the University of the West Indies (UWI), Mona campus, where Milson-Whyte lectures in the Department of Language, Linguistics and Philosophy.

And when she gave the expected author's reply, Milson-Whyte traversed memories and influences from Porus, Manchester, to the University of Arizona, USA, with the UWI among the stops in between, in establishing the foundation of what she described as "a significant milestone".

There was a mother who insisted that she "talk properly" - but at the same time, the Rastafari talk and those who would 'talk bad' in the community. Added to those were, Milson-Whyte said, "The 'badwud-badwud' expletives that I have still not heard in longer combinations outside of Porus."

There was an influential piece of Jamaican fabric in her future, as Milson-Whyte said, "But I had a language revolution when I came to UWI, Mona, in the early 1990s. I remember like yesterday that Dr Kathryn Shields-Brodber included a big fat Jamaican 'bad word' in her lecture in the Inter-Faculty Lecture Theatre. With that 'expletive experience' and other language-related experiences on the campus, I began to think seriously about the tensions between official and unofficial languages."

Milson-Whyte said, "These engagements and others were leading me to focus on the interconnections of language use in society, language teaching in schools, and writing at the tertiary level - the book. The real serious start of my exploration was via my dissertation at the University of Arizona in the US in 2006-2008."

Then, on sabbatical from 2012-2013, she was afforded the time to pull together the multiple influences and sources, "... focus on my data in hand, collect new data, and craft the book".

Milson-Whyte anchored her address with a number of points she wishes Academic Writing For Creole-Influenced Students to stimulate discussion. In the latter stages of outlining them, there was applause from the audience when Milson-Whyte raised the issue of multiple-choice format assessments which may shortchange the tertiary-level students. She reminded all that writing is a marathon, a long-term pursuit. And in going the distance at the university level, administration has to support the academics.

In addition, Milson-Whyte said, "If there is no revaluing, at the tertiary level, in a system in which nothing changes, and the target language remains English only, academics will have to engage in transcreation to enable many students' development. In other words, we will have to facilitate multiple levels of teaching, students' uptake in the Creole language, and explanations of uptake in the target language."

Earlier in the programme hosted by Dr Monica Taylor, Dr Kathryn Shields-Brodber had given an analysis of Academic Writing for Creole-Influenced Students. In giving thanks throughout her reply, Milson-Whyte credited numerous persons who have contributed to her life, from Nurse Pitter, who delivered her, to husband Dr Karl Whyte, and specific to the book, Professor David Russell's comment that Academic Writing for Creole-Influenced Students is "an extraordinary look at writing in higher educ[a]tion in a developing nation. It is well researched and engagingly written".

"Professor Russell's comment is particularly gratifying because his work figures in the risks that I take in the book," Milson-Whyte said.