Olive Lewin worked tirelessly to preserve the spirit of Jamaica 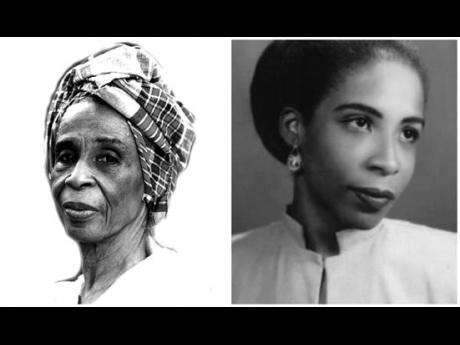 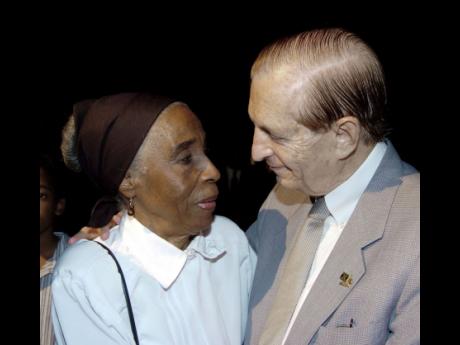 Peta-Gaye Clachar
Edward Seaga distinguished fellow at the UWI, greets Dr Olive Lewin before the CPTC launch of a video documentary, ‘A treasury of folk music with Dr Olive Lewin’, at CPTC on Thursday, March 20, 2008. 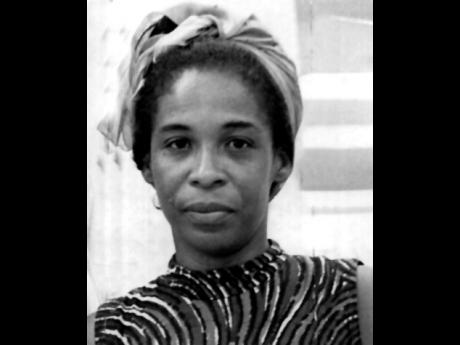 Her early intellectual upbringing, which started on the plains of Vere in Southern Clarendon, triggered a hunger for learning about things Jamaican which would eventually lead to a lifetime of work for which she is credited with rescuing Jamaican folklore from Eurocentrism. And by April 10, 2013, when she died, Dr Olive Wilhelmina Lewin had in fact resurrected some of the little-remembered, colourful traditional folk forms which had enriched and informed the cultural landscape of her homeland.

Tomorrow marks the 88th anniversary of the birth of this anthropologist, cultural historian, author and ethno-musicologist who dedicated her life to preserving aspects of the Jamaican heritage so many take for granted today.

Travelling the length and breadth of Jamaica at late hours of the night under very arduous conditions, Lewin spent many hours in many different places talking to thousands of people, recording, as she did, every aspect of traditional life - some unique to certain places, often in remote, isolated communities. It is no wonder then that years after her passing, this pioneering cultural icon's work in collecting and collating aspects of Jamaican folk history remains unparalleled and unlikely to be matched or surpassed.

"She wanted us (Jamaicans) to appreciate and understand our culture and the far-reaching impact it had, which should bring us pride rather than us looking to other people's culture because ours is very rich and varied and speaks to the strength of our ancestors and what they went through and how they persevered," Johanna Lewin shared with Arts & Education.

"She was committed to helping to create a better, accurate understanding of ourselves based on the knowledge of who we truly are as a people. This included how our ancestors were able to deal with adversity and find strength and character through the music and were able to endure a lot more than people even today could begin to appreciate."

This assessment of her mother's contribution to Jamaican life by an only child is informed by the time spent during those exacting journeys across the country, learning as she did, literally at the feet of the great woman she knew as Mom.

"It was just the two of us. I was her skirt tail. I was very involved in her work because she used to carry me around as baggage when she was going all over the island to collect her folk music, so I was very exposed to it and got a deep appreciation and a wide knowledge, and I thank her for that," Johanna disclosed.

Life on the road was hard, she admitted, but the excitement of new places, meeting new people, learning the different dance moves, work songs, and so on took the edge off the physically demanding task, which she now looks back on with some measure of pride.

"I appreciate her involvement and the research that she did, which brought to light our rich musical cultural heritage, her work with the Memory Bank programme, and also how she got Jamaican traditional folk music into the international arena. She was really talented. Her musical arrangements are amazing, and I really appreciate what she did for us and for me."

It's an appreciation shared by fellow anthropologist and ethno-musicologist Edward Seaga, who put Lewin in charge of the Memory Bank Project at the start of his eight-year tenure as prime minister of Jamaica in 1980. However, their association and collaboration goes back much further to when Seaga took charge of the culture portfolio as a member of independent Jamaica's first Government.

He told Arts & Education: "One of the objectives I had was to raise the consciousness of folk material so that people would know more about our folk history and our folk culture, and that was how the Festival came about because that provided the showcase. But fearing that there could be a lot of material out there in the wild in folk society that had not been collected, I wanted somebody to make the rounds and to collect what had not been collected, and that is where Olive Lewin came in."

Seaga recalls that Lewin came very highly recommended and he thought she would be perfect for the job, and did she deliver!

"She went out there and did a masterful job because she not only collected what had not been collected, but she did recordings on a lot of other areas of folk life, and that brought about the Memory Bank."

Fifty years later, Lewin's work continues to bear fruit, an accomplishment in which Seaga, too, can take pride.

"She created quite a collection on folk life so that people (today) can understand and appreciate and the country can put for its history. Her legacy is definitely the collection of folk music she was able to assemble in keeping with the arrangement that she had with the ministry through me and second, the Memory Bank which she assembled," he said.

"Despite the fact that she was extraordinarily busy with the collection of music and items for the Memory Bank, she found time to train young people in music, and as a result, formed the Jamaica Orchestra for Youth, but that has now been transformed into the Jamaica Youth Orchestra. That brought young people into the sphere of classical and other types of music than what they hear and which broadened and enriched their lives," the former prime minister added.

On the question of what might have fuelled the enthusiasm and dedication which drove Lewin, Seaga offered this answer.

"She just happened to be someone who had a special hearing, a special feeling for folk life, and she would get up out of her bed and go to a spot if she heard that they were having a wake out there, or nine night, or something, just to hear the music, to see if there was anything new. We got along so very well. She was one of my favourite people that I ever worked with."

It was in recognition of this pioneering woman's indefatigable spirit, unswerving commitment and dedication to country that the Government gave her an official funeral and awarded her the Order of Merit, the country's fourth-highest national honour. During her lifetime, Lewin was given membership to the Order of Jamaica and the Order of Distinction in the rank of Commander Class.

The State also organised a very spectacular, colourful and very fitting tribute by way of a set-up at the Ranny Williams Entertainment Centre in St Andrew, at which a number of traditional groups and the Jamaica Folk Singers, of which Lewin was founder, performed.

In addition to the many awards, accolades and honours bestowed on her, the Clarendon native had the distinction of being declared an honorary Maroon in 1973, while the Indo-Jamaica Cultural Society in 1985 recognised her with a Certificate of Merit for contribution to the development of the Indian Cultural Heritage of Jamaica.