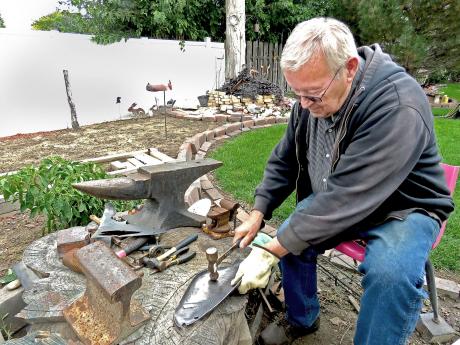 Steve Frederick/Star-Herald
In this photo taken on Oct. 8, 2015, metal artist Ron Kephart uses a stump in his back yard as a hammering station while shaping a sheet of iron into the body of a fish, in Mitchell, Nebraska. Also a painter and woodcarver, Kephart has been winning awards for his increasingly complex designs.

The workspace behind his garage where Ron Kephart creates his metal sculptures is more a blacksmith shop than a studio.

You'll find sheets of 16-gauge iron leaning against a wall, patterns of leaves and other common shapes used to make tracings, a plasma torch used to cut the metal and a collection of various ironwork tools, as well as jigs and clamps for securing and bending projects. Outside the door is a battered stump and a few anvils where hammering and shaping take place. Nearby is a pile of found objects, mostly gear wheels and teeth from farm implements.

The surrounding fence - the entire yard, actually - is adorned with birds, fish, flowers, and other finished pieces, as well as works in various stages of completion.

"I hardly ever sit down with one thing and finish it," Kephart said. "There are usually 10 pieces out here that I can pick up and continue working on."

The retired Mitchell resident studied art years ago at a forerunner of today's Western Nebraska Community College, but went on to work as a property appraiser. He began to use his art when he was hired by the late Don Steen to manage the WyoBraska Natural History Museum, also known as Wildlife World, in a former train station in Gering. Steen, a hunter, had collected about 650 taxidermy mounts, representing 380 species from six continents, and wanted a place to display them. Most of the collection later passed to the Riverside Discovery Centre. While there, Kephart began painting murals as part of the displays.

"I painted first," he said. "I thought I was just so-so as a painter."

When the museum closed, he moved on to woodworking. He'd make sets of butterflies and display them outdoors. Completed projects often inspired improvements in those that followed. His works became popular.

Once a letter from a passerby enquiring about the art was addressed to "the house that does butterflies." The post office delivered it.

But as he had walked away from painting the murals he left behind at Wildlife World, he eventually quit making butterflies and began woodcarving.

"It gets repetitive for me. I like to take on a bigger and bigger challenge," he explained.

Many of his pieces were birds, ducks and fish. Sometimes he'd carve a relief sculpture and frame from the same board.

"I like wildlife. I really like to do fish," he said. "When I was growing up, I did a lot of fishing."

With each step, his works became more complex. His next move was to metalwork. It was a craft he knew nothing about.

At first, he created flat shapes. He sometimes sought ideas as well as details of how a certain fish or bird is supposed to look, from images on the Internet. Then he began hammering curves into them and welding pieces together to create three-dimensional objects. Lately, he's been colouring his creations with a two-part acrylic paint, similar to epoxy, that hardens and gleams as it dries.

While some metal artists use computer programs and laser jigs to cut precise shapes and produce multiple replicas of previous pieces, he prefers to work by hand.

"I make one-of-a-kind items, and that would make it a job. I don't want this to be a job," he explained.

He seldom does commissioned works.

"They start calling you every day and asking how it's coming. I don't do my best work that way. I enjoy doing my work, and if they want to buy it, that's great."

But striving for constant improvement means he's always looking to tweak details that didn't satisfy him in the last piece or to try a new idea.

The hardest part of creating the art can be knowing when it's finished, he added.

"Sometimes you can work it to death and ruin the entire piece."

Lately, however, he seems to be finding a groove. He created a large brown trout - now on exhibit at the Harms Centre at WNCC - to enter in the Scotts Bluff County Fair, where it won a reserve championship. At the Nebraska State Fair, it won its category, was named best in show and won the judge's choice award.

"I took it to the state fair just to say I took something down there. I never expected to get that good of a rating," he said.

A stylised large-mouth bass was named president's choice at a recent show at the West Nebraska Arts Centre, which is now displaying a colourful butterfly he created as part of its Halloween-themed show, 'Artfully Undead'.

Despite Kephart's success, he wants his pieces to remain affordable for fans of his work.

"I've been told I don't charge enough," he said. "I've always made my art with the idea that it's for somebody else to have."