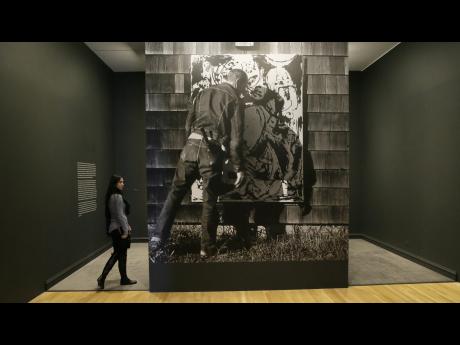 AP
In this photo made Wednesday, Nov. 18, 2015, a patron enters the exhibit Jackson Pollock: Blind Spots at the Dallas Museum of Art in Dallas.

The largest exhibition ever assembled of Jackson Pollock's lesser-known "black paintings" is going on display in Dallas.

The exhibit opening Friday at the Dallas Museum of Art includes 31 black paintings, works from 1951 to 1953 that were a radical departure from Pollock's classic drip paintings.

Gavin Delahunty, a curator at the Dallas museum, who organised the exhibit, said the world had "just about got its head around" the drip paintings when Pollock introduced the black paintings, reducing his palette to black, leaving the canvas unprimed so paint seeped in and incorporating figuration.

He said the black paintings have been overshadowed.

"The all-powerful aspect of the drip paintings made between '47 and '50 had sort of added blinkers to our ability to look at Jackson," Delahunty said.

Jackson Pollock's Blind Spots runs through March 20 in Dallas, the only US stop. The more than 70 works featured include drip paintings. Many works haven't been exhibited in more than 50 years. A smaller version ran earlier at Tate, Liverpool.

Delahunty said the black paintings are "Pollock at his most masterful, most polished, most technically skilled."

"If Pollock made an error should Pollock have ever made an error while he was making the all-over drip paintings, he could disguise it in the next layer. With the black paintings, there's nowhere to hide," Delahunty said.

For those who quip that they could paint a Pollock, Delahunty says: Try.

"Try to 'splash out' a Jackson Pollock and see how unbelievably difficult it is to maintain the tightness, the composition, the colour coordination, the eye-brain-wrist nexus, the management of gravity that he managed to pull off and maintained pictures that stand the test of time," he said. "Only Pollock can make those paintings."