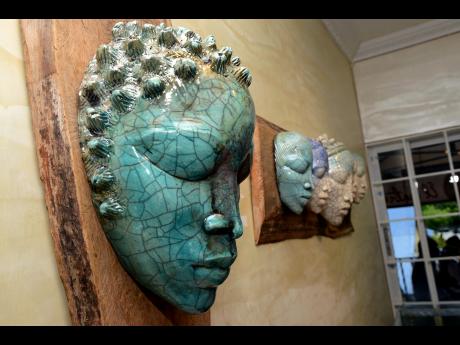 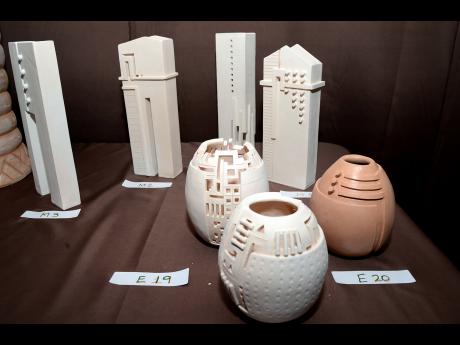 Rudolph Brown
Artwork on exhibition at the Earth and Fire Exhibition at Art Gallery Decor VIII.
1
2

As fire ignites your soul and provides an unwavering flame and light into the unknown, so do the ingeniously crafted signature heads of renowned ceramic artist and sculptor Gene Pearson. His distinctive and recognisable pieces encapsulate precise detailing, bright and vibrant colours that celebrate black beauty and dignity.

Pearson, in collaboration with architect Tony Constantine, recently organised 'The Earth and Fire Exhibition' at Art Gallery Decor VIII. With over 30 pieces on display, art lovers and enthusiasts were treated with the sharp features of his heads and masks.

With his style and subject matter inspired by the arts of ancient Nubia, Benin and Rastafarian culture and immersed in dialogue with the visual language of contemporaries, Pearson captured the dynamism of clay in each of his magnificent pieces. The silent, introverted magnanimity of his sculptural and ceramic forms understandably has influenced greater local recognition for ceramics and ceramic sculpture as a fine art.

Some of his work on display remained unglazed while others, the colour thinly veiled the terracotta beneath. Pearson rarely used bright garish colours as he has a preference for earthy tones, while others have an ancient patina, and even look like a wooden sculpture.

"Faces are my passport. Everywhere you go you see faces. They represent people of different ethnicity and is the gateway to our soul. Over the years, persons have collected them and even take them

One of the early students of what was the Jamaica School of Art, now the Edna Manley College of the Visual and Performing Arts, Pearson has followed, blazing his own trail, emulating the work of founding fathers Eugene Hyde, Barrington Watson and Karl Parboosingh. He was also one of the first students for master potter Cecil Baugh.

The collection, he said, was created over a one-year period. Despite the demand for his art work, Pearson said he has never stopped working. "I never stop. I just keep working. I continue to grow like the trees in the mountain," the 70-year-old said.

Pearson is particularly known for using Raku-style firing, an ancient Japanese technique, of which a few of these pieces are also on display. In his outdoor studio, the glazed sculptures are taken from the kiln crackling hot and placed quickly on a bed of sawdust in a shallow pit, then covered with a metal drum.

The shock from hot to cold is part of the process and the sawdust catches fire and the sculptures smoulder, turning black. After eight to twelve hours, they are removed and dipped in water to quench them off. The results are amazing: The smoke creates a black matt surface in the unglazed areas and the ash from the sawdust melts like glass.

Not one for frequent exhibitions of his work, Pearson is happy to have teamed up with Constantine who basically considers his work as just a hobby. An architect by vocation, he first practised in Florida for a number of years before returning to Jamaica. He presented a number of highly intellectual and techno-structural pieces.

Constantine was himself unaware of any talent for ceramics and pottery until 2006 when he moulded clay for the first time as a protÈgÈ of Pearson. In his spare time, Constantine has managed to create a large catalogue of work, bringing a new vision to what ostensibly are pots and vases. His works span a range of themes from fundamentally organic and anatomical to highly intellectual and techno-structural.

At the same time, they also seem to span the past and future ages of man, evoking images of ancient civilisations of the Euphrates and Nile valleys

juxtaposed with visions of a Manhattan skyline of the next millennium.

"It's just something I found out I could do. I have transferred the detailing and geometry from being an architect into a hobby. It has become more of a lifestyle for me," he said.

Artist and painter Joshua Higgins, who has followed Pearson's growth since he first interacted with him at the Jamaica School of Art, credits Pearson's world-renowned recognition to the consistency in his work and craftsmanship, in addition to his high level of dedication and commitment to the arts.

"Gene's work has explored the medium of clay and glaze in so many ways. We again have the opportunity to see his work in a comprehensive way. His is a true to form story of his commitment to his work," Higgins said.

Higgins, whose work spans nearly three decades in art, was fascinated with the Afrocentric look of the heads, especially the female representations. "The collection is well balanced, Tony with his architectural approach with Gene giving the human form to the exhibition," he said.

David McBean, an avid art collector, described the works as "amazing". Constantine's work, he said, hinted more on the geometrical architectural side that was complemented by the more free-flowing art form of Pearson.

"As a collector, I appreciate Pearson's work. His work is recognisable and still has an individual look and feel about it," McBean said.

Rose Tavares-Finson also an avid art collector said Pearson's work always has her coming away with a feeling of wanting to see more of his work. "His work stands out, and over the years he has definitely put his stamp on his pieces," Tavares-Finson said.