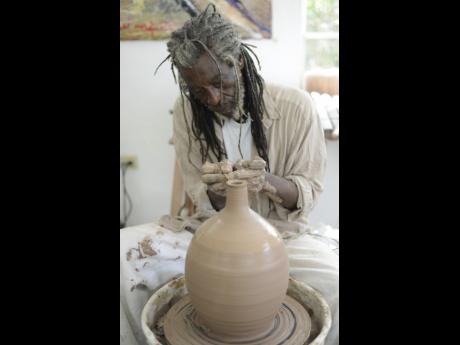 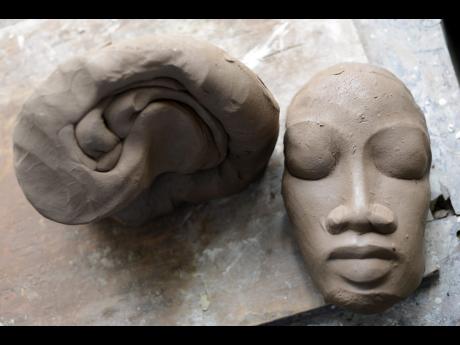 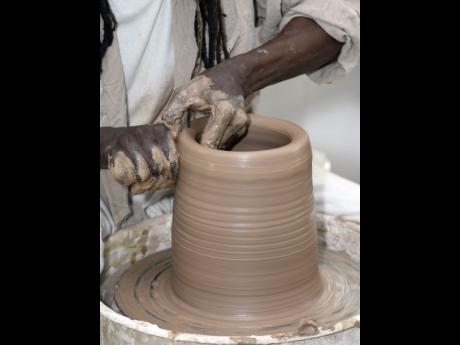 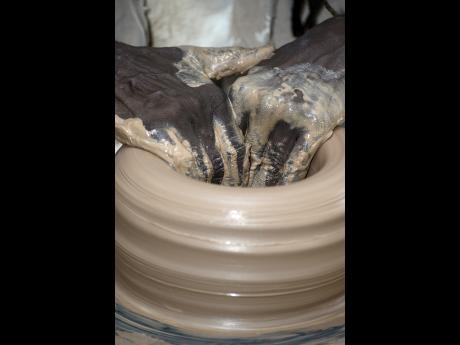 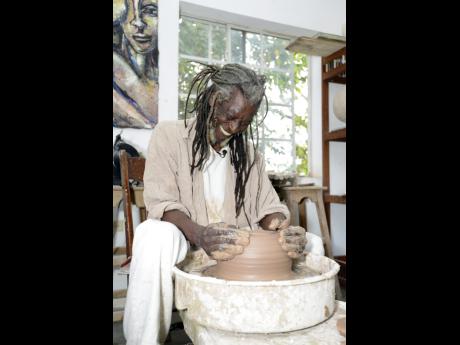 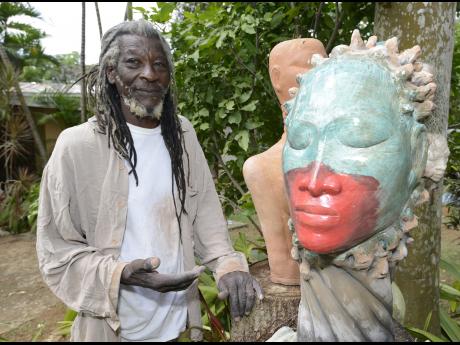 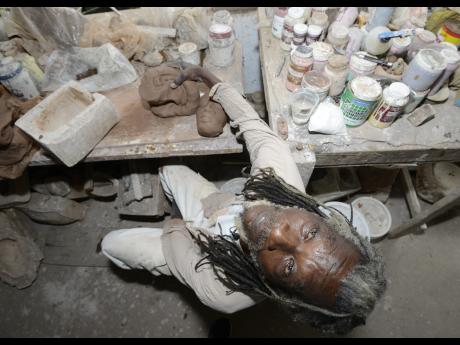 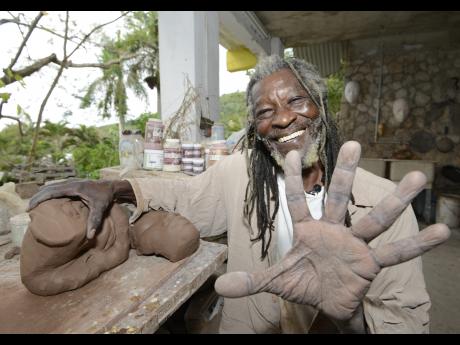 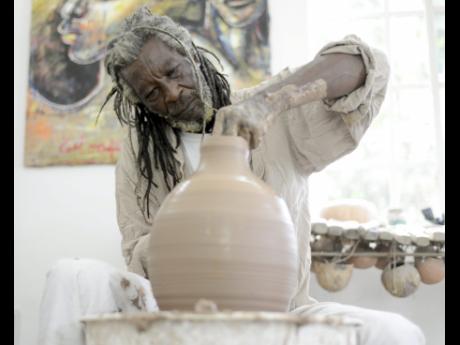 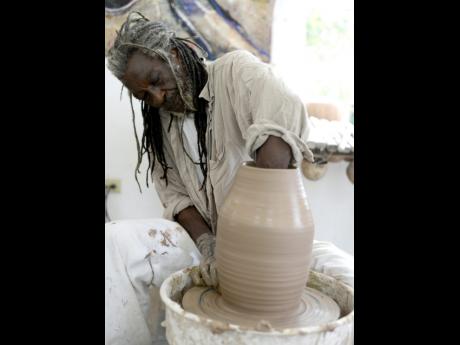 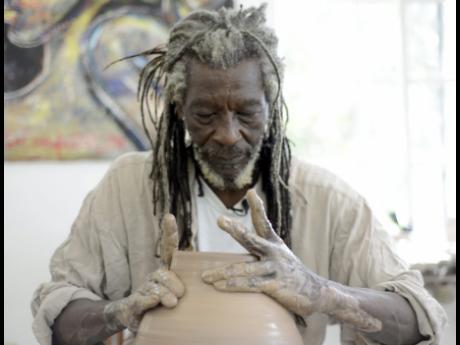 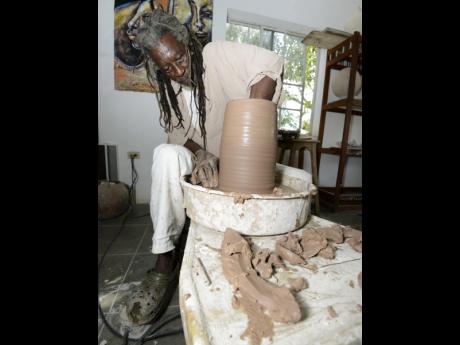 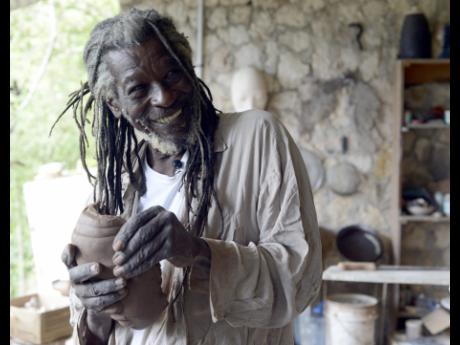 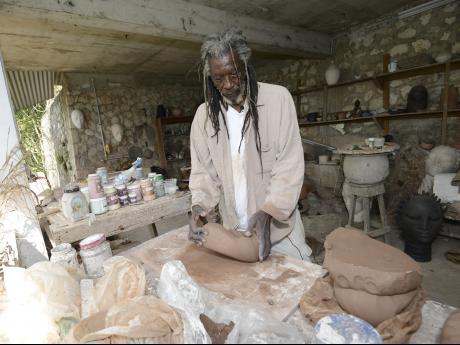 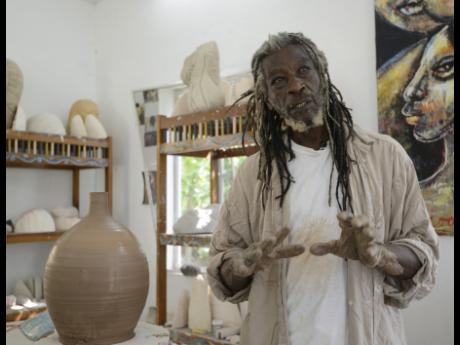 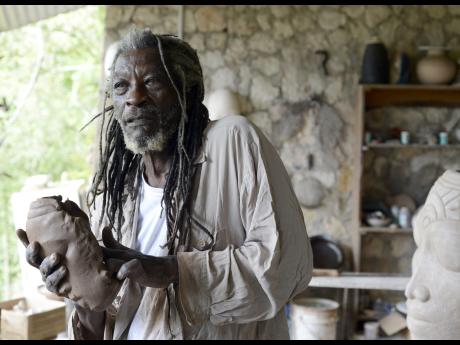 In a peaceful and tranquil environment, tucked away neatly in the hills overlooking the hustle and bustle of Kingston city surrounded by exquisite flora and fauna, renowned ceramic artist and sculpture Gene Pearson creates absolute magic from clay with his hands.

There was no doubt in my mind once we travelled the meandering rustic road to Pearson’s art studio that with every inch of the journey gracefully decorated with ingeniously crafted signature heads that a clay bender as he aptly described himself was deep in thought at his work.

A different world awaited us once we began the mountainous climb, along awe-inspiring staircases with wind chimes gently swaying in the wind, a spectacular view from two-storey the master potter’s house.

Since the first piece of clay fell into a fire and was transformed into a glasslike material, people have used clay for domestic wares, ritual tokens, and decorative items. Pearson unassumingly clad in his work gear that was already freshly stained with clay indicated he had already begun his day around the potter’s wheel.

It was no doubt that Pearson after sculpting distinctive and recognizable pieces encapsulating precise detailing for 55 years, that his daily routine is never mundane but has become a passion he has cultivated for the art over the years.

As in Jeremiah 18: 6 – ‘As the clay is in the potter’s hand, so are you in My hand,’ Pearson took us on an unforgettable journey into his world. Just imagine a potter with a lump of clay in his hand. The lump or clump is made even aggressively bended to eliminate the air pockets.

The vessel is shaped with precision and obvious years of perfected craftsmanship and the mouth is smoothed in just a few minutes.  It is then cut from the wheel head with a wire and left to stiffen. Afterwards the stiffened vessel is inverted on the wheel and trimmed with a sharp tool.

“I take off the piece when it is still wet. I do not squeeze too hard but just enough to get a grip and remove it from the wheel,” Pearson said.

The clay's future is entirely in Pearson’s hands in order to create the ultimate design he has planned. He explained that after a piece of pottery has been formed and dried completely, it must be fired to achieve permanency.

“Without the chemical transformation that occurs through firing, the piece can dissolve back into mud once it comes in contact with water,” he said.

These specialized firings can take up to a week to complete. When the kiln becomes hot, pieces of pottery are added at regular intervals. The fire is kept burning for hours a day for several days until the clay has matured. The kiln is left to cool for several more days—if it is opened too soon, the vessels will crack and break.

“Most of the pieces take up to six weeks to be ready depending on the size. Up to two days after creating the piece I can carve the design and it can take up to one week to completely compose the work for it to dry properly. Drying time takes up to four weeks because of the climate here. If I was located on the flat it would take less time,” Pearson said.

Some of Pearson’s larger pieces are fired using wood. These pottery do not have a glaze. “As the fire gets hotter, drafts pull wood ash through the kiln where it is deposited on the pots. The pieces are so hot that the ash melts on the clay and creates its own glaze. The patterns produced are unpredictable,” he said.

“After firing once it is ready, I take out the piece and put it on sawdust and cover it to cool it down. The heat reduction process can take up to 30-40 minutes, while firing can take between three to four hours. A kiln can reach temperatures of 2500 degrees F,” Pearson added.

Clay comes from the ground, usually in areas where streams or rivers once flowed. It is only useful for pottery if it has good "plasticity." Natural clay that we find outside usually needs to be cleaned and refined before it can be used.

Any tiny rocks and lumps are removed and some additional materials, like sand are sometimes added to create the perfect workable clay.

“I got the idea for wood firing from my father who was a baker. I used wood before 1981, however using gas is much faster. I now use wood firing for larger pieces and it holds a lot more pieces as well. I have been using the same kiln since 1981,” he said.

Bisque he said is the first firing. Clay he said is usually fired in a kiln twice, once at a lower temperature.  After a piece is bisqued, it can be glazed, painted or left as is. If the clay is glazed, it then goes in the kiln for a second firing.

The glazing process he said is used to decorate clay that will hold liquid. It is essentially ‘liquid glass’ or glass particles (mixed with colors or pigments) that have been ground down. Glaze melts at a high temperature and turns into the coatings that you see on a finished pottery piece.

Pearson sees the clay, not for what it is, but for what it may become. Using different moulds especially for his trademark mask pieces he shapes the clay and the clay is made to hold treasure for years to come.

“I call my eyes my passport. I see faces in everyday life and I use the features to create the pieces then I use the fire to put the spirit into them,” he said.