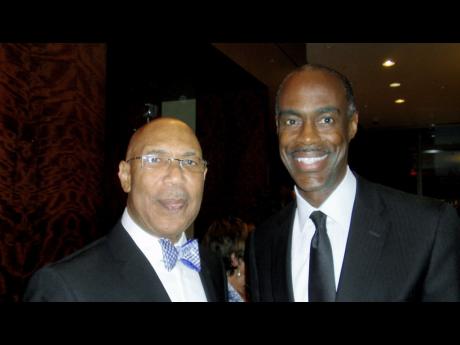 In its 34-year history the American Friends of Jamaica (AFJ), a non-profit organisation based in New York, has donated US$13 million to Jamaica. Over the past year, board members and volunteers in New York and South Florida raised more funds for health, education, and development in this country. One of the most successful fund raisers is Pat Falkenburg, who with her husband Ed, introduced a terrific idea.

Pat explained: "For our anniversary we hosted over 100 friends to a four-day celebration at Round Hill. Although we said "no gifts," we knew the generosity of our friends and suggested that if they wanted to give a gift, they could contribute to Hanover Charities or American Friends of Jamaica. I am fortunate to serve on both boards.

"My husband and I wanted to do something that would benefit students, who represent the future of Jamaica. With the help of Katrin Casserly, we identified schools in Hanover Parish that are urgently in need of computers. Happily, we were able to raise enough funds to make, we hope, a meaningful improvement in the education these young people are able to enjoy." And contribute they did, well over J$6 million!

Katrin Casserly, chairman of the Hanover Charities, told me that she has worked with the Falkenbergs during her 18 years at Round Hill and that "it has always been a great pleasure as they are such generous and genuine people. When we spoke about this, she made it clear it should be for computers. It was easy to choose the schools, Esher Primary with more than 500 students and Rusea's High with more than 700 students and neither of them has a computer lab. Two major schools but lacking in such critical equipment so it was an easy choice."

Katrin said that each school will have a plaque with the Falkenbergs' name and made an interesting observation: "This charitable spirit is the way for the future. To ask for charitable donations for a specific cause is so much more meaningful when one celebrates a milestone birthday, family event, or anniversary. Just imagine the impact on all these students' lives by sharing in this way!"

She suggested that many US friends of Round Hill owners, who are not familiar with Jamaica, may feel more comfortable donating via the AFJ, so the AFJ and Hanover Charities can work on a great partnership. Because the AFJ is an American-based, approved non-profit organisation, audited by the US Internal Revenue Service, designated donations are tax deductible to the fullest extent allowed by law for those who pay US taxes, which is beneficial to those who want to help Jamaica.

Most money for annual grants given by the AFJ is raised at their two galas, in Miami in the spring and the more formal event, in New York City in the fall. At both events outstanding individuals are honoured. On April 23, 2016 Hon. Lascelles Chin, OJ, CD received two standing ovations in recognition for not only investing in Jamaica and employing more than 900 people in his LASCO Affiliated Companies, but for using proceeds from his success to fund outstanding philanthropic programmes as already noted in the Gleaner on April 20th.

Also recognised at the event was Robert Runcie, Superintendent of Broward County Public Schools, the sixth-largest school district in the US, with nearly 270,000 students in 238 schools, centres and technical colleges and more than 30,000 employees. The son of Jamaican parents with limited formal education, Runcie cares deeply about reaching out not only to those within his district, which includes the majority of the Jamaican diaspora of South Florida who live in Broward County, but he has a vision of making a difference here in Jamaica as well.

He believes that "in the 21st century, there are great opportunities to leverage technology to enhance access to high-quality instruction and expand educational opportunities for children all over the world, so that location becomes less of a determination of long-term success in life.

"This presents a tremendous opportunity for Jamaica's children. I believe that we can start by establishing a partnership with one of the largest and most respected online learning programmes in America - Broward Virtual School (BVS), which the Florida Department of Education announced earlier this month has been rated an "A" school once again, the highest rating awarded to a public school. There are also other opportunities to be explored with Florida Virtual, the College Board, and Khan Academy to name a few.

"The district I lead, Broward County Public Schools, provides learning opportunities where more than 12,000 online student courses were completed last year through BVS, which offers full-time enrollment to students in grades Kindergarden - 12th through an online educational delivery system. BVS offers equitable access to high quality, individualised education, through the Internet and other distance-learning technologies. Virtual learning provides flexibility of time and location, and promotes development of the skills, attitudes, and self-discipline necessary to achieve success in the 21st century. BVS offers students the opportunity to earn a standard high-school diploma entirely online and move on to attend universities around the nation, including Ivy League schools.

"My vision is for our students in Jamaica to be able to access these learning opportunities via virtual learning. If there is serious interest, I would like to work with Jamaica's leaders to figure out how to make this a reality."

At the AFJ Gala Superintendent Runcie was able to meet Governor General Sir Patrick Allen and hopes to meet Jamaica's Minister of Education. Runcie's vision highlights the timeliness of the Falkenbergs' gift of computers and demonstrates the effectiveness of networking through the AFJ.