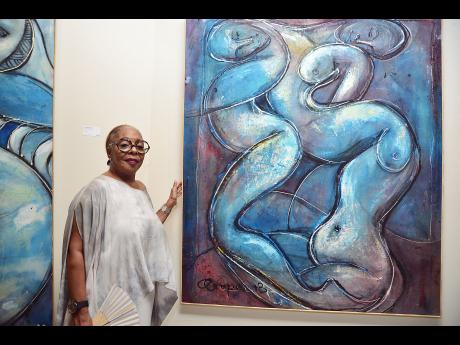 Patrick Planter
Renowned Jamaica philanthropist, Pat Ramsay had nothing but good things to say about Cooper’s work. Here she stands alongside Arabesque, one of Cooper’s outstanding works. 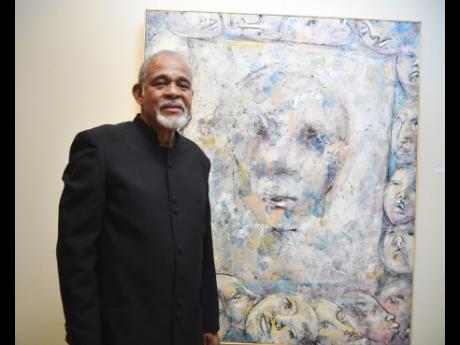 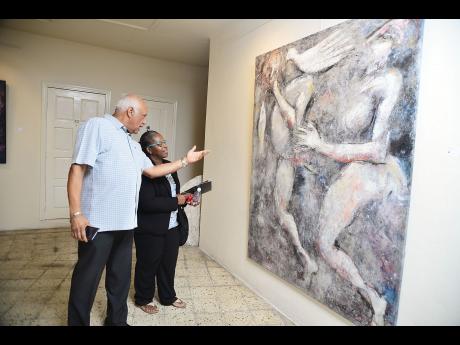 Patrick Planter
Penelope Morgan-Owens and Keith Goodison are in awe at one of Cooper’s signature pieces Last Dance (Mixed Media). 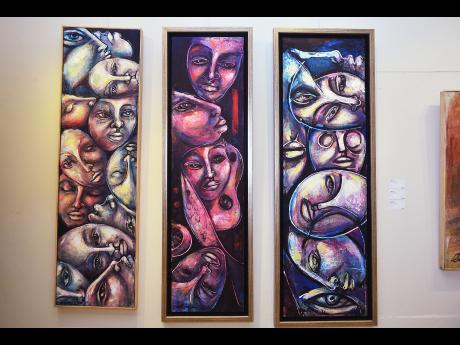 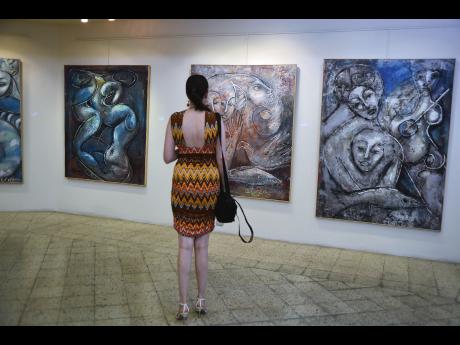 Patrick Planter
A patron enjoys pieces at the opening of the Cecil Cooper exhibition onFriday, June 17, at Olympia Gallery. 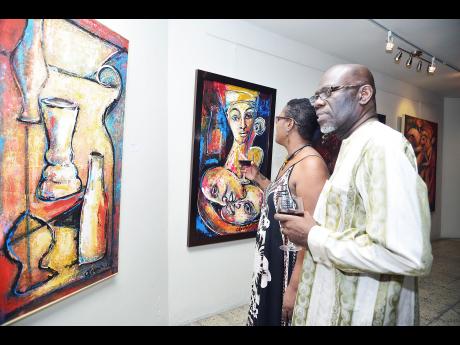 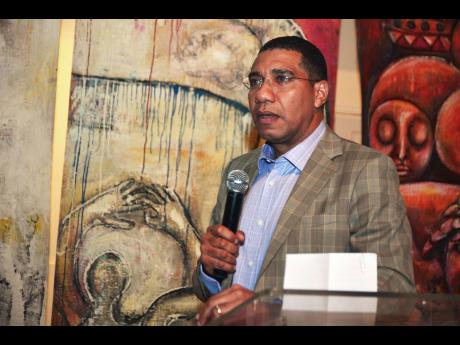 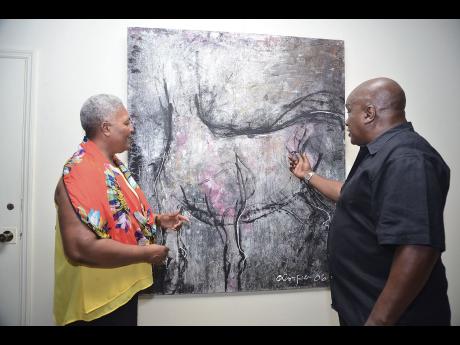 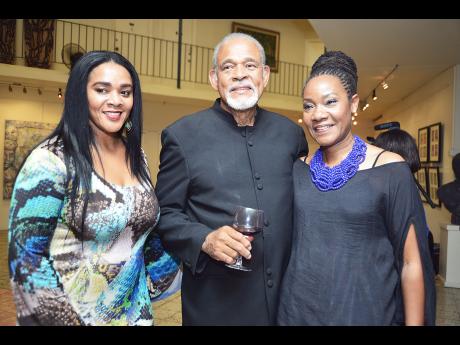 Well regarded, expressive, realist painter and retired educator Cecil Cooper recently unveiled 'Milestone-Cecil Cooper at 70' an exhibition featuring works from his collection from 1948 to 2016 at the Olympia Gallery in Kingston.

The occasion allowed guests to glean greater insight into the world of Cooper and his art. The 42-piece collection reintroduced art enthusiast to some of the ideas and themes Cooper has presented over his career. These include family and the relationship between organic matter, animals, and space. This was represented by bold colours and soft lines set on large canvases.

For this collection, Cooper's medium of choice was acrylic on canvas while he also showcased his talents with acrylic on paper, charcoal on paper, mixed media on paper, and the tryptic, which is acrylic on curtain.

"The theme's are ongoing," he said. "I try to engage the Jamaican situation into my work and to build on it. The work is about getting up each day and keeping the process going. It is not a profession. It is the way I am living," Cooper said.

Cecil Cooper was one of the first students to graduate from the Jamaica School of Arts diploma programme in 1966. During this time, he was taught by artists such as Barrington Watson, who was then the director of studies and head of the painting department, Karl Parboosingh, Vernal Reuben and Milton Harley, and Albert Huie who was the 'artist in residence'.

In those days he gravitated towards a style incorporating an expressive realism. His peers were Christopher Gonzalez, Winston Patrick, Kofi Kayiga, and Gene Pearson who would all become respected artists in their own right.

"The exhibition is, in essence, to give thanks because I am 70 and I am still alive. I am giving thanks because I am a child of the 1960s which I think is the most significant decade since Independence in terms of our development. There is a romanticism about the 1960's that we have lost. But in life, you lose things and [you] win things," Cooper said.

Cooper's talents have not been restricted to the visual arts and his talents as a classical musician exposed him to European forms. It was on the basis of these skills that he was awarded a scholarship by the Jamaican Government to study music in New York. He attended the Art Students League, where he studied under the African-American abstract expressionist Norman Lewis and a few years later, he attended the School of Visual Arts where he obtained his Bachelor of Fine Arts Degree in 1976.

Cooper began his professional career as a fine artist exhibiting in New York galleries, but in 1980, he returned to Jamaica and began teaching painting at the Jamaica School of Art, now Edna Manley College of the Visual and Performing Arts.

"My life is really about art and theatre. We have icons like Rex Nettleford and Louise Bennett, Phillip Sherlock, who have made significant contributions to the development of this country. But this is me. My entire family lives abroad, but I am in Jamaica and that is what I am giving thanks for," Cooper said.

The launch of Cooper's exhibition also paid tribute to author and playwright Barbara Gloudon for her contribution to national cultural life. "My life has been touched by so many wonderful people. I am honouring Barbara Gloudon because she has contributed so much to my life," Cooper said.

A beaming Gloudon who humbly accepted the many sentiments expressed by Cooper said they were from an era when there was openness and a freshness of the arts and when persons would gather and have discussions on related topics.

"People like Cecil Cooper came from that particular age where you took your art seriously without being ponderous. Those were the days that they were the best artists [around] and they took younger people under their wings," Gloudon said.

"I am really moved by the quantity of work that he has done and the extent of what he has done. His particular great respect and love for the human form and always the light that enriches everything continues to amaze me," she added.

Prime Minister Andrew Holness addressed the crowd of art-world enthusiasts and described Cooper as a pioneer in the field. "The works of art on view in this exhibition, which range from the 1970s to the present day, tell their own stories about Cecil Cooper and his artistic passions. The works on view reveal a romantic artistic temperament, capable of expressing deep joy and torment," Holness said.

"The abstracted lyricism of his paintings suggests that there is no contradiction between Cecil Cooper the musician and Cecil Cooper the artist, but these two sides of his creative work are deeply connected," he said.

Meanwhile, fine art photographer and art critic, Donnette Zacca, who has worked with Cooper for a number of years at the Edna Manley College of the Visual and Performing Arts said he is well respected by his peers, students, and the artistic community.

"What we are seeing here, in my opinion, on his 70th birthday is an amalgamation of what Cecil is accustomed to presenting - only finer. I think that his colours have got much cooler, he is still celebrating women and a particular type of cultural feel," Zacca said.

Cecil Cooper's - 'Milestone - Cecil Cooper at 70' exhibition will run for one month at the Olympia Gallery in Kingston from June 17 to July 17, 2016.keisha.hill@gleanerjm.com