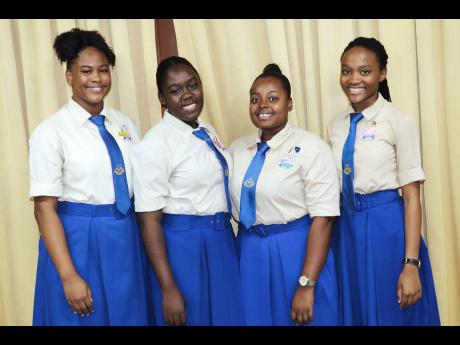 The results of the 2016 Caribbean Advanced Proficiency Examinations (CAPE) and Caribbean Secondary Education Certificate (CSEC) reflected a welcome resurgence by students of Holy Childhood High School with Samoya Cochrane copping an impressive five subjects, all 1s in the CAPE, and Sahara Pinnock's 10 CSEC passes - all at grade 1 all with an 'A' profile - being the standout performances by the Half-Way Tree, St Andrew, all-girl school.

Also contributing to the 80-year old Catholic-run institution's stellar showing were Carissa Lewis, who is a budding nutritionist or dietician, and Jada Bender, a future scientist with concerns about the parlous state of Jamaica's natural environment.

Arts and Education recently caught up with all four bright sparks and some of their teachers to get some insight into the secret of their success.

Describing herself as "intrinsically motivated" to study, Samoya said her passes were in pure mathematics, accounting, economics, management of business and communication studies.

She wants to be an actuarial scientist and is actively scouting for scholarships to pursue that career.

For her passes in economics, principles of business, principles of accounts, information technology, office administration, electronic document preparation and management, mathematics, English, Spanish and social studies, Sahara was adjudged the most outstanding business education candidate in the region for 2016.

Sahara, who is now in lower sixth form, has already secured a scholarship to pursue a first degree in social sciences at the University of the West Indies, Mona, where she plans to major in economics and marketing, which she will be starting in two years' time.

For Nsongurua Udo, acting head of the business department, the overall results have been gratifying, which she said were achieved under 'adverse conditions'.

"Adverse conditions in that we don't have a lot of computers," Udo said.

"Our computer lab is very small and we are not able to accommodate as many students as we would like to, and so when we look at other schools that have much more resources, yet we were able to excel, then I think we have done something very significant," she disclosed.

Keeping focused and staying the course are a given for achieving academic success, but there is no one formula that works for everyone, the four teenagers all agreed. In fact, notwithstanding her love for and seeming natural ability to master mathematics from an early age, Samoya found herself questioning her subject combination.

"I knew persons who were doing it and they were like, 'It's very challenging', and sometimes I reconsidered: I really want to do this, do I want to put myself under this pressure?' It was the same thing when I came into sixth form. I heard that it would be very challenging for me to get a grade 1 in pure mathematics, but after five ones in CAPE, I realised that nothing is really impossible," the teenager explained.

"I expected to do well, but not as well as I did," Sahara admitted. However, having demonstrated a serious work ethic and commitment to her studies from Grade 7, her teachers were not in the least bit surprised.

"What I found out when marking her paper is that she pays attention to details, and I am surprised at how detailed she is, and that speaks to a lot of study; it speaks to a commitment. So I think that is what has contributed to her success," Udo opined.

"She is very driven and that is what I love about her," Vanessa Watson-Grandison, who teaches principles of business and economics, said.

"Failure is not an option. Her presentations are above normal, the way she would just give additional spice to the presentations. I remember once she wrote something and I was shocked at not only the delivery but the content and how it was put together. When I asked where she got it from and she said she wrote it, I said, 'Wow, that's a different level of writing!', and that's how I knew that she was an exceptional student."

The unassuming teen attributes the root of her academic success to a love of reading, her favourite activity. Add to that strong parental support and an enabling teaching environment, which feeds into an unflinching desire to keep her eyes on the prize.

On this, the elder of two girls for Wilbo and Jacqueline Pinnock is very clear.

"It's all about sacrifice and seeing the goal ahead that you want and what it takes to get there. The goal for me is to be a brand manager and I also want to do economics because it's my favourite subject, so that's my goal," she told Arts & Education, sharing some of the struggles that have been and continue to be integral to her success.

"You have a lot of assignments, you have to study and you have your SBAs (school-based assessment), but I think it's all about managing your time and knowing when it's time for studying. Afterwards, I can do everything else. My parents were very supportive in doing this. My mother stayed up with me during the nights, helping me to study my history and, yes, it was hard."

Meanwhile, having come first in her class with an 80 per cent average four years in a row, Bender understands the importance of continued all-round academic excellence; she shared her tried-and-tested formula for success.

"I don't think about doing the homework alone. I think about making sure that whatever you're writing reflects who you truly are. So, for me, it was about getting my teachers to see that Jada Bender was a good student, so it wasn't only about answering the question, but how I answered the questions," she said.

Bender's success in integrated science has also given the teen some lessons on the value of research and the importance of caring for the natural environment.

"I think we need to become more concerned with nature because persons litter every day and don't really pay attention to what it's doing to nature. We need to pay more attention doing more research, in that field to help develop us in that regard."

A hardworking, determined person who interacts with others very well, Carissa attributes her success in home economics management largely to a "creative personality".

"It's not really centred on theory. It's a lot of practical, and food and nutrition as well, so I really love it and I'm very passionate about creativity. I believe that the appreciation for food and nutrition is growing because worldwide, more persons are diverting from sodas and unhealthy drinks like that to making their own healthy and also tasty fruit drinks," she shared as she showered accolades on her school.

"I really think that the teachers here, they connect with students on a different level, not just academically. They really do, and I'm appreciative of that and think that motivates and drives us more to do well."