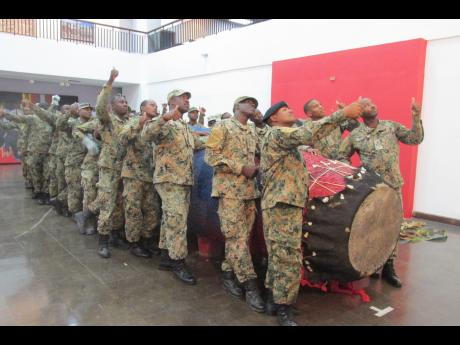 Paul Williams
Thumbs up for a job well done.

This was on Monday, February 6. A big, blue and red, two-headed drum was transported, firmly secured on a flatbed truck, from Orange Hall Estates in St Ann to the National Gallery of Jamaica at Ocean Boulevard downtown Kingston.

The 30-foot drum, titled Ceiba, hewn from a fallen silk cotton tree, is the biggest functional drum in Jamaica, perhaps in the Caribbean. Its placement in the gallery brought excitement to passers-by, who stopped to see how this massive instrument would have been taken up the low steps to the entrance and through the door.

The two sections of the entrance door were completely removed, but a glass partition, mounted on a concrete wall, and which separates the lobby from the drum's temporary resting spot, also had to be taken out. That was where the biggest challenge, to heave the drum through the opening, was.

But with the effort of 37 Jamaica Defence Force soldiers, the drum was slowly brought into the space. The lifting and pushing of the drum itself brought some entertainment to onlookers as the instructor raised and lowered his voice army style in giving directions to the able-bodied men.

There were tense moments as every effort was made not to damage this work of art. When the entire drum finally got through the opening and was placed on the ground, there was a spontaneous round of applause.

The main opening ceremony will be at Ocean Boulevard on Sunday, February 26, at 1:30 p.m. The keynote speaker will be Minister of Culture Entertainment Gender and Sports Olivia Grange. There will be live performances, including the beating of Ceiba. There is no admission fee, and the doors will be open from 11 a.m. to 4 p.m.

There will be 160 works on display at the three venues, and there are four main components: special projects by national invitees; tribute exhibitions to two noted Jamaican artists; contributions from invited artists; and contributions from juried submissions.

The exhibition continues until May 28.