Adventures of an endless summer holiday 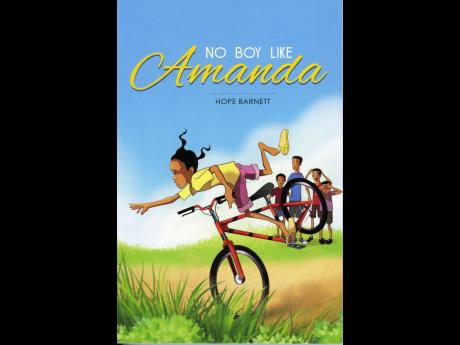 Life, for some of us, as we have come to experience it, has all the ingredients of a journey, which at every step unravels the unknown, intertwined with twists and turns and unexpectedness.

The story of Amanda delves into some of those mysteries, seen through the eyes of an eight-year-old, a little girl who is trying to find innovative ways to 'blend in' with her siblings, all boys, and be one of them.

In a setting that is close to nature, beyond the realm of the fast-paced, gigabytes-encased, smartphone-obsessed existence, No Boy Like Amanda exudes the simplicity of life among nature and a step back in time, like grandma's place in the countryside, where one could climb the trees, splash in the stream or ride the bicycle - fun in its most pristine form.

Hope Barnett takes us on this summer holiday, most of the adventures coming from her childhood experiences

"A lot of the stories in the book happened to me," she says. "Growing up in Runaway Bay in St Ann, we used to go down from the back of the house to the sea and go fishing."

The adventures related in the book sprinkle a healthy dose of factuality in this fictional account.

Through the eyes of children and the main character of the book, Amanda, one gets insight into the social fabric of being a girl who, and through trials and misses, stands her ground to gain the respect of her peers.

Set in rural Jamaica, on the island's north coast, Amanda's story follows a group of children, the excitement they experience wandering among nature, and oft poignant yet amusing chains of events.

Though a children's book, Barnett subtly, yet firmly, highlights interpersonal relationships, dealing with a perceived identity crisis, innovating, and in the process, grabbing attention across age groups. it might make one reminiscence if such a thing happened in one's life at some point in time.

Amanda's story revives the fond memories that many of us as adults have of our summer holidays and tells of the summer adventures of a group of children. The story follows the children as they create their own fun like kite flying, riding bicycles, going fishing, and picking mangoes, among a myriad other activities.

Living with four brothers, aged between five and nine years, Amanda has to be innovative. at times she is confused, trying to piece together the jigsaw puzzle called life, which for a girl of her age, is to have maximum fun and be accepted by her siblings as 'one of them'.

Life, as the story tells, is how you make the best of it, with whatever you have. growing up in a family with meagre resources, Amanda does not have a wide variety of things to keep herself busy. This fuels her desire even more to be herself, being the only girl and having no company, she is determined to be among her brothers, though she is constantly jeered at and discouraged by her eldest brother, Phil, who is painted as a mean-spirited character.

Amanda has to blend in yet stand out among the boys, and her brothers reluctantly include her in their adventures; but as circumstances would have it, there is a mishap waiting to happen. Buoyed by an indomitable spirit, a doting father, as well as her first "crush", she manages to force herself into the group and join the boys on a few adventures. Amanda, however, is challenged to endear herself to the group as whenever she finally gets a chance to tag along with the boys, she somehow always seems to end up in some kind of mishap.

Amanda meets Stephanie, a girl in the neighbourhood, who comes from a 'well-to-do' family and who comes to stay with her grandparents for the summer. A friendship is developed, and in the process, a new set of adventures unfold.

No Boy Like Amanda has also been endorsed by the Children's Advocate of Jamaica as "a novel perfect for children" and " ... a must-read for children and their parents".

The book has won the Book Industry Association of Jamaica 2013 Publisher's Award for 'Best Children's Chapter Book' and was selected by the Jamaica Reading Association (JRA) as the official book for National Reading Week 2013.

It was also used by the Jamaica Library Service in its 2014 staging of the National Reading Competition and was the featured book of the month for April 2016 for TVJ's children's programme Kids Say.

No Boy Like Amanda, like the meandering asymmetrical pathways in the countryside, takes the reader on an unforgettable and never-ending summer holiday.

Available in bookstores across Jamaica