Humanities in action | Relevance of history in a digitalised world 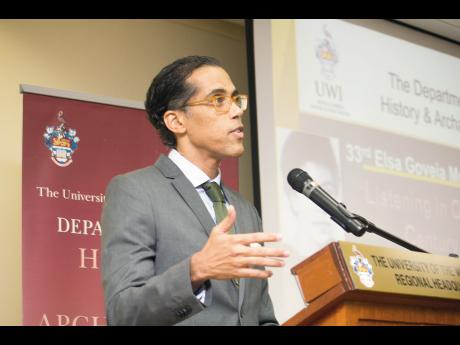 The landmark publication of Claude McKay's Amiable with Big Teeth, appearing for the first time in print in February this year, generated much celebration and reflection in literary circles. Most observers have used it as an opportunity to contemplate the gifts that Clarendonian McKay gave to the world, made clear once again in the pages of this his previously unknown final novel. The manuscript had been lost to the ages until an intrepid graduate student, Jean-Christopher Cloutier from Columbia University, discovered it, untouched and languishing in an unexpected place in his university's library.

It is not only the impressiveness of the book's theme - a window unto what McKay calls "Afamerican" solidarity for Ethiopia in the inter-war years - that should force us to reflect, but the very existence of the book. Penguin, the book's publisher, has called its discovery "monumental" as it changes how we view McKay and the world he moved in. The find also points to something more fundamental: the power of discoveries to alter our understanding of the past.

Discoveries are the charging sparks of history. They illuminate aspects of a time we thought we knew and compel us to reconsider that knowledge. That is what excites students of history most: when we realise that there is always so much more to understand about our past. Think of the long-gone generations of McKay's faithful readers who believed that they had read all his works and now denied the opportunity to experience this newly public one. Readers coming to McKay for the first time, and those more familiar with him, can approach his body of work in a new light thanks to this discovery.

But discovery in history comes in different forms. Any knowledge of the past that is previously unknown to us is a discovery. It is the power of that knowledge to emancipate us on personal and collective levels and to reshape our understanding of the world we live in that is the real benefit of history.

MADE IN EACH MOMENT

History is made in each moment. The accumulated registers of past actions form a human story of how we arrived at this point. It is never a complete story. Even with the shaky reliance on memory and the familiarity of its outlines and progress, the textures and colours of the story are filled in with enlightened perceptions and findings that expand our view of the world. Each new discovery is fitted and merged to the narrative of human experience to produce an enhanced sense of ourselves and our connections to a time before us. Without this, our awareness of our society and our place in it is depthless.

In 1964, historian Douglas Hall lectured undergraduates at Mona on the "Relevance of History" to Caribbean self-identity. That importance is under threat these days as fewer students at the UWI and in our secondary schools appear to be interested in the study of history. It is a global dilemma. Much evidence, both empirical and anecdotal, reveals that the numbers of history and traditional humanities majors has, over the past decade, dropped markedly in the United States, the United Kingdom, and Canadian public schools as well as at the UWI, prompting some higher-education critics to call it a "crisis in the humanities" from which there may be no return. This has led observers, even here in Jamaica, to call for radical reforms in humanities curricula or the joining of departments long viewed as separate disciplines.

These are possibilities that pioneering colleagues at Mona never had to fathom. In their time, the importance of Hhistory as a discipline was self-evident and unquestioned. As former colonies, Caribbean states measured our gains by our past. Our achievements were all the more spectacular because they had come out of a conscious awareness of everything that was rallied against us - a centuries-long belief that we had no history; metropolitan insistence that we were nothing more than appendages of empire; a denial of personhood; a disregard for our cultural contributions; and an overarching assumption of inferiority.

When Hall, Elsa Goveia, Roy Augier, and others insisted six decades ago on the teaching of Caribbean history it was very much with the need for this self-awareness in mind; that whatever decisions we made about our future after independence it was with a deeply informed appreciation of where we had come from. Through public and private venues, scholastic and otherwise, history was embraced as the bedrock on which we stood as Caribbean people. Ziggy Marley's admonition on 1988's Tomorrow People that if "you don't know your past, you won't know your future" echoed a wider social acceptance of history's centrality.

Our artistes appreciated as much as our academics that without a grounded knowledge of the past, its importance is passed over and disconnected from a larger story. Their efforts are part of the legacy that we now take for granted.

Today, the drift of students from history is said to be the result of a variety of factors. Repeated arguments of irrelevance, inconsequentiality, unemployability, have been stated for decades. Just as often the troubling refrain that Jamaicans are too caught up with history, leaning on the past to explain away the shortcomings of the present, is being stated by younger people. There is also a louder declaration that we need to move on from the study of the past to meet the pressing demands of the twenty-first century, a criticism uttered by many who should know better.

The problem with these views is that they betray a sense of complacency, as if the discoveries of the past are finite and exhaustible. They also render inactive the need to reckon with the problems of the past, which continue to have remarkable endurance in our time. There is a grave danger in this. If history is treated as a fixed outcome and not as a live process of learning - an innovative, ever-growing discipline - where new findings fuel fresh and multiple interpretations, then we cease control of the search through our past, relying instead on outmoded ways of seeing ourselves and where we come from. We further obscure the essential links between past and present that historical education facilitates and which makes our examination of the present more profound.

A pressing argument is that history education is now more diffuse with easily available online sources doing the job of history classes. It is incorrect to assume that history is not adaptable to these transformations in ways that say, the hard sciences are. The study of history is always in constant evolution, building its reconstruction of the past on information from a variety of sources and using the technology and tools of the present to do so.

Still, we should remember that digital information is meant to be supplementary. Uncritical use of them can muddle one's comprehension rather than improve it if not guided with the attention to production that comes from learning history. Even more, the preponderance of readily available information, unfiltered and often decontextualised, can lead to the quick assumptions of veracity that history-training warns against.

Information is not knowledge. History is not simply facts and dates. To make sense of all that is now easily accessible only increases, not reduces, the need for the expertise that history offers.

If the lessons of the Caribbean experience have taught us anything it is that we should always question what we know and what has been written about us. In the absence of historical consciousness, rapid absorption of information can lead to superficiality, myths, distortions, and, even worse, factual inaccuracies. The age we live in makes this risk higher than any other moment and increases the urgency to act. Guarding against this involves a systematic approach to learning in which the humanistic disciplines are called upon as crucial, not optional. In this effort, history, and its eternal promise of discovery, is more relevant than ever.

- This article is one in a series that seeks to promote and highlight the impact of the Arts and Humanities on the individual's personal development and career path. Please send feedback to fhe@uwimona.edu.jm.