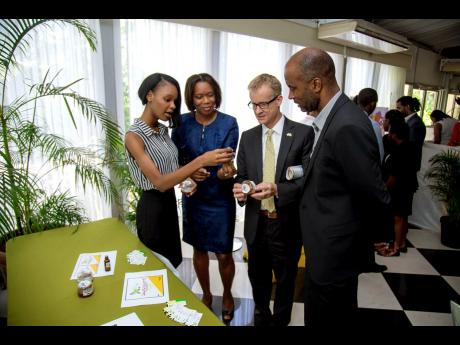 Teaching entrepreneurship in the classroom is relatively new, but with more and more students leaning towards business subjects, there is a growing interest in linking theory and practice.

On April 27, the Junior Achievement Company of Entrepreneurs (JACE) Secondary Early Entrepreneurial Development (SEED) programme was officially launched at the Terra Nova Hotel in Kingston, where plans were outlined to begin the formal integration of entrepreneurship into the ninth grade curriculum beginning in September 2017.

This programme was developed through a partnership of the Ministry of Education, Youth and Information (MOEY & I), Junior Achievement Jamaica (JA Jamaica), and the United States Agency for International Development (USAID), which is providing funding for the first three years of implementation in all 168 high schools islandwide.

As part of the National Standards Curriculum (NSC), JACE SEED will be integral in changing the landscape for students' entrepreneurial development at the ninth-grade level. In an attempt to connect learning with the real world, JACE SEED engages students in learning about the fundamentals of starting a business while they develop one with the goal of marketing and selling a product or service.

The programme is being expanded from an after-school format that began in 2009, with the support of principals and teachers. It was first implemented in 50 schools, with over 1,000 students from across the island participating. Many have since testified that the programme has helped them to develop successful and profitable businesses and also to gain valuable skills and experiences through forums, mentoring, competitions, and conferences, locally, as well as, internationally.

In the last two years, Jamaica placed in the top three at the JA Americas Regional Company of the Year Competition, an annual contest that engages over 40,000 high school students from across 30 countries in the Caribbean, Latin America, and Canada. In 2015, Rusea's High School and St Jago High School were selected to represent Jamaica at the regional competition. Rusea's High placed second with their creation of breadfruit flour. In 2016, Ardenne High School won first place along with the Delta Social Impact Award, which is presented to the company that displays the strongest awareness and commitment to the sustainability of the environment. Their product was natural scented candles made from a variety of local fruits, which they have since further developed into a mosquito repellent.

Locally, students are also recognised for their unique business ventures through business, pitch competitions at regional forums and through earning the top award of Company of the Year. Excelsior High School was the 2016 winner, not only earning the coveted title, but also a $500,000 award, 10 per cent of which is directly awarded to the lead programme teacher at the school.

Kasan Troupe, the education ministry's director of regional educational services for Region 1, has expressed pleasure at seeing the growth and continued impact of the Junior Achievement programme

"I do believe the JACE SEED programme will revolutionise our students' readiness for the 20th century. I commend the principal, teachers, and students at Excelsior High for embracing and excelling at the programme," she stated. "I fully support the continued advocacy for our schools to incorporate JACE SEED. I can commit that all of our Region 1 schools will participate."

The programme is set to begin in September 2017, and Junior Achievement Jamaica will be facilitating meetings with principals, conducting teacher training and parent/

student sensitisations to ensure a seamless implementation process. Collaboration is also under way with churches and other community organisations to facilitate the programme's delivery to out-of-school youth between the ages of 15 and 24.

JA Jamaica is a registered non-profit organisation focused on preparing youth ages 5-24 to be globally competitive in business and to own their economic success. The programmes offered are based on three pillars: entrepreneurship, financial literacy, and work readiness, which connects learning to the real world and teaches youth how to generate wealth and effectively manage it; how to create jobs that make their communities more robust; and how to apply entrepreneurial thinking to the workplace.

Since 2009, JA Jamaica has reached over 60,000 youth through partnerships with the Ministry of Education, Youth and Information, the United States Agency for International Development, and several private and public organisations.