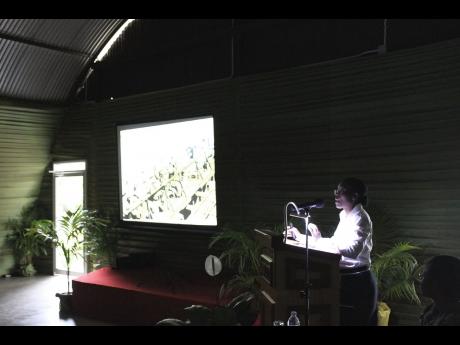 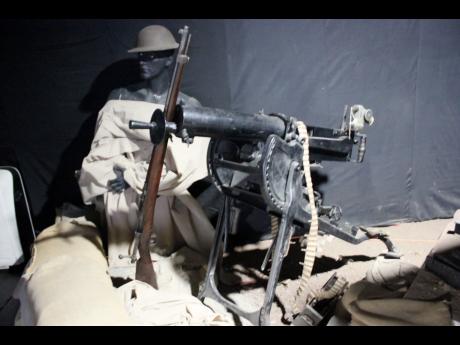 Amitabh Sharma
A mannequin of a World War I soldier in the background with a .303 Enfield rifle and a sub-machine gun. 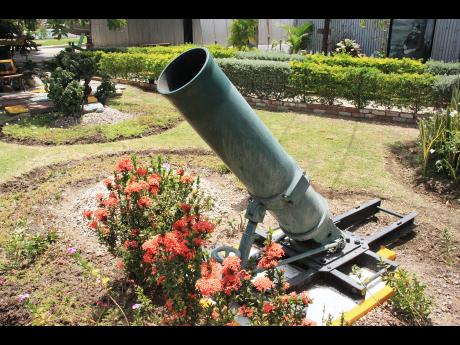 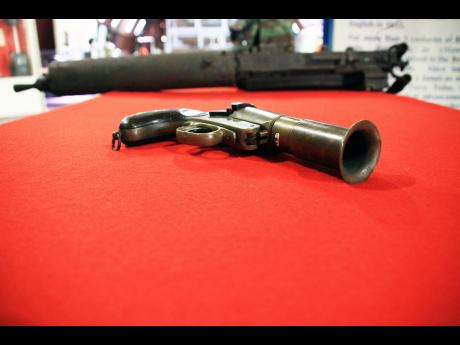 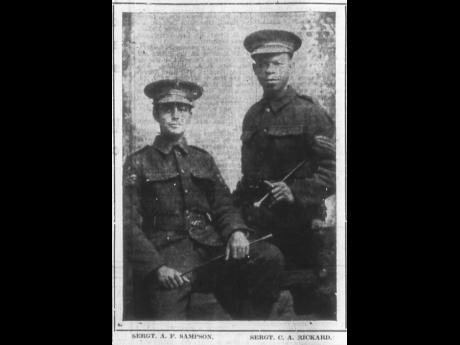 It was a day in March of 1916, when a few good men were going to learn a hard lesson, and, unfortunately, after countless human lives would have been lost - in this case, without a single shot being fired.

"One such story," recalled Hyacinth Simpson, professor in the English Department at Ryerson University in Toronto, "dates back to the years of the Great War, and involved some of the over 10,000 Jamaican men who volunteered to serve King and country as members of the British West Indies Regiment."

Simpson, who was in Kingston last week, narrated this poignant tale at a lecture at the Jamaican Military Museum and Library (JMML) at Up Park Camp in St Andrew.

"As a result," she continued, was "what Brigadier General Blackden, the officer commanding the troops in Jamaica, called 'a stupid blunder', [involving] the SS Verdala transporting the 1,045 men of the Third Jamaica Contingent in March 1916."

This blunder, according to Simpson, was the decision by the British to send SS Verdala to Halifax instead of England.

What unfolded as a result was a serious of horrific events. The ship and the troops stood facing an indomitable force.

"The men were not only sent into the middle of the notoriously harsh Canadian winter season without preparation; they were also transported on what military personnel described as 'a ship not well suited to a voyage to a severe climate like the Canadian - or, indeed, for any long voyage with troops on board'."

Verdala was unfit, as it was a cargo ship with open decks, and the only source of heat was a warming stove in the officers' saloon that could only seat 14 men at a time.

In her presentation, Simpson described the conditions in Halifax, which was in the grip of a "terrific blizzard" said to be a "storm of unusual severity for the season".

It was not only the ship that was ill-equipped, the troops were not assigned any proper gear - armed with a pair of cotton socks each, a thin overcoat, and two pairs of boots, which were no match against the cold winds and the 14?C temperature. The elements hit them like mortar shells on rapid fire.

"To make matters worse, a 1,000-foot length of the ship's piping was exposed to the cold and so the drinking water was frozen solid," Simpson said.

The situation on board quickly became dire, said Simpson, sharing excerpts from her research on the incident, and the contingent remained on board.

The Jamaican troops aboard SS Verdala were told that it was "impossible" to provide accommodation for them on shore.

Over 600 men suffered acutely from the effects of frost bite, and 40 of them developed gangrene.

The horrors of this 'battle' took a heavy toll on the troops.

"Through knowing of our past, we are able to come to terms with the difficult experiences of our ancestors," remarked Captain Staci-Marie Dehaney, curator of JMML.

"But the question is," Dehaney continued, "how much do we really know of the histories that have defined us? Do we really understand or even know the little known stories that would have had profound impact on who we are today as individuals, as a community, as a society, and as a nation?"

The ship was stranded in Halifax for four days before the powers that be finally ordered Verdala to sail to Bermuda. By the time they set sail for the warmer waters of the Caribbean, more than 100 of the men had been suffering from severe cases of frostbite and were already taken to hospital in Halifax for emergency care.

"Around half of those who went to Bermuda later succumbed, in one way or another, to the effects of frostbite," said Simpson.

According to Simpson, Canadians helped in the rehabilitation process of the Jamaican troops - 17 of the dozens of frostbitten soldiers who had their toes, feet, and even full legs amputated were fitted with prosthetics and provided with five months' vocational training to improve their post-disability earning potential by the Canadian Military Hospitals Commissions.

"Halifax Incident stands as an example of the possibilities inherent in international cooperation, especially in times of significant upheaval," Simpson said. "It is also a window into the rich and multilayered story of Jamaicans and the First World War - a story, which historians and other researchers are still unravelling."

The Halifax Incident is not anything to be glorified in the pages history of the Great War, but it is a human tragedy that could have very well be avoided.

Dr Hyacinth Simpson teaches and writes about Caribbean and Caribbean diaspora literature, theatre, and films. In recent years, she has been researching and writing about the long-standing connections between Jamaica and Canada.

Dr Simpson is interested in hearing from Sunday Gleaner readers whose relatives served with the Third Jamaica Contingent (later renamed the 4th Battalion of the British West Indies Regiment).

She can be reached via email at hsimpson@english.ryerson.ca.