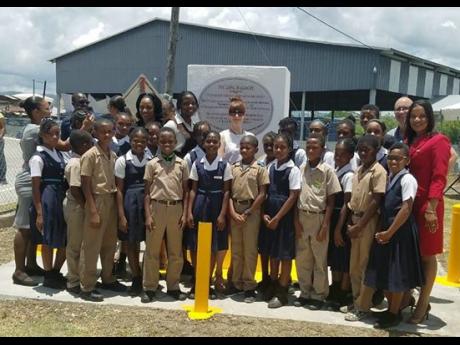 Contributed
Keisha Brown (right) from Scotiabank Jamaica, with Michelle Faubert (back centre), associate professor at the University of Manitoba, Canada and students who had gathered to be part of the memorial event

Students from a number of schools in Black River got a chance to witness first-hand the story behind the Zong Memorial, which was initially installed in the town in 2013.

The Zong Memorial stands as a monument that immortalised yet another atrocity associated with slavery. Etched in granite are the words that read: "In honour of our 133 Africans ancestors who were massacred by drowning ... by the Captain and crew of the slave ship Zong".

"When we received a letter requesting assistance to fund restoration of the memorial and to facilitate a presentation on the history of the Zong, we saw it as an opportunity to contribute to the history of the island," said Yanique Forbes Patrick, vice-president Scotiabank.

The Zong massacre was the mass killing of 133 African slaves by the crew of the slave ship Zong. The crew, who had taken out insurance on the lives of the slaves as cargo, threw the slaves overboard to cash in on the money from the insurance they would have lost had they died due to the lack of drinking water.

A presentation was made by Donna Parchment, the political ombudsman, along with Michelle Faubert, associate professor of Romantic-era literature at the University of Manitoba in Canada, who was also on the island to launch an exhibition of an 18th-century letter on the Zong, to be housed at the Institute of Jamaica.