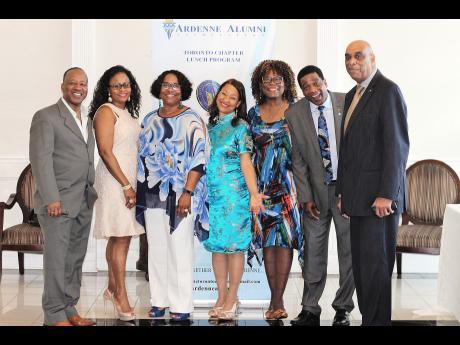 Nadine Molloy, principal of the school, gave a progress report on the institution.

Molloy lauded the students for their commendable achievements and for always rising to the top of their fields.

"Our students continue to shine in the arenas of TVJ Quiz, girls' football, chess, basketball, table tennis, lawn tennis, cricket, Cadet Corps, Junior Achievement, UWI Maths Olympiad and Grade 9 Problem Solving Competition, and the performing Arts, and are showing improved performance in track and field. We have won too many awards to name them here.

"In the 2016 Caribbean Examinations Council's sitting, the school earned a 22 placing on the Regional Merit List, up from 10 places.

These included two first-place spaces and coveted CXC CAPE Student of the Year 2016 Award. That earned the school the title of CAPE School of the Year 2016," Molloy said in her address.

The principal shared that 101 Grade 9 and 10 students passed mathematics in 2016 with flying colours.

Eighty-seven students got straight As.

"This year at the CXC/CSEC level, we boast 92.4 per cent of our students passing five or more subjects, including math and or English. That is 279 of the 317 students who sat the examinations," Molloy said.

Ardenne does not engage in the practice of streaming or screening students. All students are required to sit a minimum of eight subjects of their choice at the end of five years.

Ardenne High School's lunch programme and other initiatives supported by the past students in Toronto do not go unnoticed as they work feverishly and with excellence.

The organisation celebrated its 35th anniversary as an association in Toronto, and the Mother's Day celebration was part of that recognition.

President of the AAA Denzil Davis said: "Today, in celebrating our 35th anniversary as an association in Toronto, we celebrate Mother's Day. This our intentional signature event, reflecting on the journey of women who have become mothers to their own children and other children they have 'mothered' throughout their lives ... From its humble beginnings, Ardenne High School has emerged as one of the schools of choice for students from all walks of life. This year, Ardenne becomes 90 years old and the celebration has started."

Margaret Harnett was honoured posthumously, and Brunhilde Chin got an award for being a part of the AAA for the past 21 years, serving diligently as public relations officer, and secretary for the association.