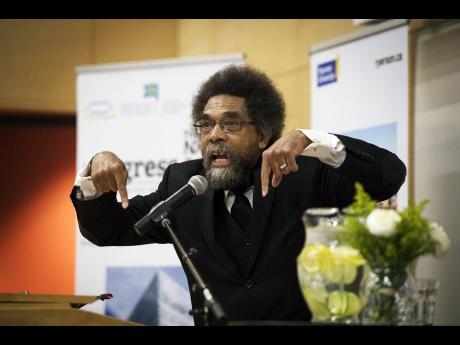 He said that in the 'American empire' (a term used to refer to the American imperialism in academic circles), even as they are seeing the worst, no one should have a fixation on Donald Trump.

"He's not some isolated individual who dropped out of the sky. No. He expresses deep, deep tendencies in American culture, in American society, in the American empire. He's a fellow citizen of mine. He's a fellow human being of yours and, therefore, the question will become, can you deal with the Trump elements inside of you?"

The professor of philosophy and Christian practices at Union Theological Seminary and professor emeritus at Princeton University spoke at an event on May 29 titled 'An evening with Cornel West'.

It was presented as part of Ryerson University's programming at the 2017 Congress of the Humanities and Social Sciences. He was there to share his views on race, democracy, justice, and love.

The university hosted the congress from May 27 to June 2 under the theme 'The Next 150, On Indigenous Lands', where more than 5,000 presentations, panels, keynotes, and other events took place over the seven days.

The evening with West drew hundreds to an auditorium in the Ted Rogers School of Management, where two overflow rooms were opened to accommodate everyone.

West equated Trump with a gangsta: "A gangsta for grabbing a woman's private parts, a gangsta to see oil in another country and go think somehow you have access to it. That's what it is to be a gangsta - exercise arbitrary power."

He said that instead of "sunshine soldiers in this moment," what is needed are "all-season justice warriors, long-distance runners for freedom."

However, he noted that this is difficult in "our market-driven society that tries to erase memory and act as if we only have the present with the repletion of instant gratification and the next moment to dominate and manipulate. And the rightwing has no full-scale monopoly on it."

West said that it is a spiritual and a moral issue, as well as a political and economic one.

"Yes, we've got to zero in on the vicious legacy of white supremacy. That's always set at the centre of not just the American empire, but Canada, too, in a different way, in a different form. Just ask our precious indigenous brothers and sisters. They'll tell you about it. It is not a matter of PC chit-chat. There are human beings whose lands were stolen, whose babies were violated, whose humanity was targeted in a vicious way."

West said that with Trump, it's "raw and coarse, it's in your face. We know he's not fit. We know he's in over his head, but it's too easy just to trash him. The challenge will be who produced him. The challenge will be, where did he come from? What kind of genealogy can we give that accounts for such a figure who now runs the American empire that could drop bombs on seven Muslim countries and no major forces be raised against him?"

He was also critical of former US President Barack Obama, noting that though he was poised and highly intelligent, Obama was "a neoliberal who was willing to engage in drone strikes to kill precious children in Yemen and Pakistan and Afghanistan and Libya and Somalia, and hardly any voice was raised in the American empire. How come?"

"Oh, but you don't want to deal with the various dimensions of the vicious legacy of white supremacy - just trot out a black folk at the top and break the glass ceiling and start break-dancing in the air and end up sleepwalking on the ground. That's what we did the last eight years. We had symbolic celebration and concrete hibernation."

He said that suffering took place during those eight years such as one out of two children under six, black and brown, living in utter poverty in the richest nation in the history of the world.

"That's spiritually obscene! That's morally disgraceful! No serious talk about poverty. For eight years we didn't have it. Here comes the neo-fascist, lower than mediocrity and America has a long tradition of white male mendacity and mediocrity in high places. A long tradition - Trump is just another one. We had Bush, we had Reagan, we had Schwarzenegger. We'd go on and on and on. And I know you've got some analogues in Canada, but I don't know all of them, but my hunch is you could trot them out too."