Dispelling ghosts of Africa’s past 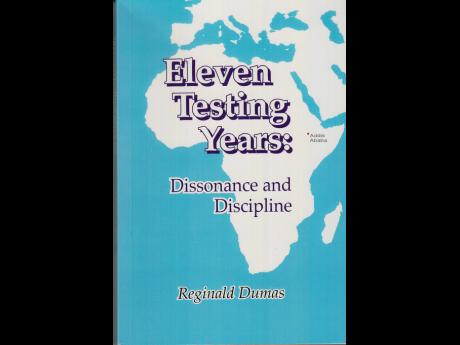 Eleven Testing Years: Dissonance and Discipline continues the life journey of diplomat Reginald Dumas. In this revelatory work, Dumas unveils the multiple variables that impacted nation building and sovereignty on the African Continent. This is a memoir of socio-political and historical significance.

It conjures academic discourse on modern African history and serves as a political compass for contemporary societies. From the Trinidad and Tobago Embassy in Ethiopia, Dumas records the waves of political uncertainty that swept across the continent in the 1960s and 70s, while offering the most exhaustive look at an Ethiopian nation he calls complex. From language and customs to the ascent of Emperor Haile Selassie and his relations with newly independent states, Dumas fuses history and politics.

Throughout, he offers the most lucid pictures of the challenges facing nascent nations, which were emerging from the throes of colonialism. He details the ubiquity of the coloniser on the consciousness of fledgling nations. For sure, Britain remained a gnawing vestige in the psyche of African leaders; and so did Rhodesia's unilateral decision to declare independence and cement minority rule. The inability to rein in Ian Smith revealed the inefficacy of African nations.

Apartheid also continued to wrestle with the conscience of newly independent states. And the birth and growing pains of the Organization of African Unity (OAU) failed miserably in formulating a cohesive and effectual plan to respond to the concerns of member states. This didn't go unnoticed, and the organisation was severely vilified in some quarters.

Policy development, according to Dumas, gave way to rhetoric and quixotic pronouncements that were hardly implementable. Political leaders, it seems, were ill-equipped conceptually to devise a system that responded to the region's diverse ethnic mosaic. It was a political zeitgeist that infected Tanzania's Julius Nyerere, who is favoured by Dumas as one of Africa's most prodigious and honourable sons. "Nyerere," he writes, "claimed to be a Socialist, an African Socialist" that "regards all men as his brethren as members of his extended family."

Dumas is critical of the Ujamaa concept, stating, "The trouble id that people do not like to be told that they are all part of the same family when they know that is not true; even when they know it is true, they are often unimpressed ... The whole thing went wrong, and greatly retarded Tanzania's socio-economic development."

According to Dumas, "too many in Africa at the time were spending too much energy and effort on rhetoric, mostly anti-colonialist, and personal aggrandisement, and too little on the sober management needed for national progress. Instability followed ..."

However, he notes that by the time he left Ethiopia in 1967, there was a shift in focus towards heath, infrastructural development, and education, a move he considers "productive."

He details the ethnic undercurrents that led to the war between federal forces and Igbo secessionists. The ephemeral Biafra state remains existentially relevant to many and the scars of millions dead, due to starvation caused by a blockade of Nigeria's east remains an indelible mark of resistance to this day.

The incarceration, torture and murder of Diallo Telli, former OAU Secretary-General by the very political figure he supported in Guinea, encapsulates the fracture of African polity and a political climate that was perennially uncertain.

From the Trinidad and Tobago embassy in Addis Ababa Dumas offers 'real- time' analysis of the many problems besetting the African continent. His prognostications of Ethiopia prove sound. The 1974 revolution was imminent. Dumas describes a hierarchical society that weighed heavily on the masses. Political inertia; a spike in fuel prices, a land reform bill that was all but dead; a drought; insensitivity by government officials, and wanton corruption.

Of post-Selassie era, Dumas pens, "Given the strategic location of Ethiopia in the Horn of Africa, geopolitical considerations were also of paramount concern, automatically accompanied by the often baleful compeers of ideology and religion. And poisoning all else was the venom of a corruption that had become as everyday as the eastern rising of the sun, and as deadly and non-discriminating as the mamba's bite."

Dumas' diplomatic responsibilities were expansive, extending beyond Ethiopia. "I was also accredited to Kenya, Tanzania, Uganda and Zambia ..."

His meeting with the notorious Idi Amin was controversial in Trinidad and Tobago because of Amin's decision to expel Asians. Dumas sensed the palpable fear that the president commanded and concluded that the "so-called 'myth' about [him] were largely reality."

Disconcerting is that some 50 years later, Africa's unmeasured past is very much present.