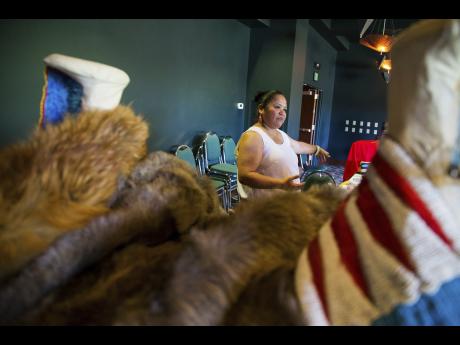 AP
The dance regalia work of Dorris Shippenpower is displayed alongside other artists with the Yakama Nation who showcase traditional beadwork, leather goods, saddle and dance regalia and other works during an event at the Yakima Valley Museum in Yakima, Wash. Humanities Washington and the Washington State Arts Commission are creating the Center for Washington Cultural Traditions in an effort to help preserve cultural traditions. 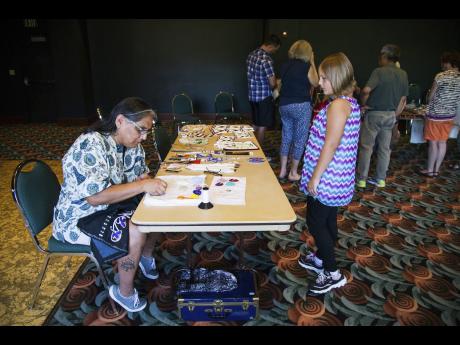 AP
Emily Schroeder, 10, watches as Miles Miller works on a beaded piece of clothing while he and other artists with the Yakama Nation showcase 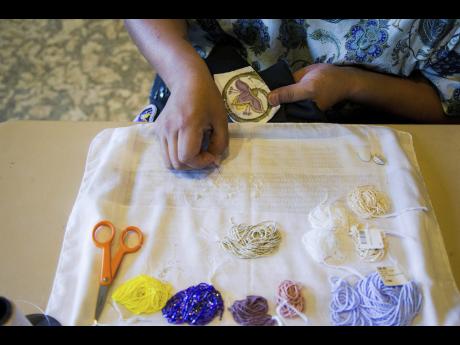 Elza Paula Pinkham first learnt bead work as a child, but she admits that she didn't pay close attention as her mother tried to teach her the traditional native craft.

"Seventeen years ago, I went to the store and got a book. I've been doing it every day since," Pinkham said as she finished a pair of child-size moccasins during a recent bead work and corn husk weaving demonstration at the Yakima Valley Museum in Yakima.

As they watched, several visitors asked Pinkham if she taught. While she would like to lead class, materials are expensive and finding a public space can be challenging.

But now, a new statewide programme aims to help. The Center for Washington Cultural Traditions is working to ensure that skills such as Pinkham's don't disappear. By offering apprenticeships and other programmes, it hopes to preserve and document traditional crafts many of which have been handed down over the centuries and support those who carry them out as well as advance public understanding.

"This was born out of about three years of planning," said centre director Kristin Sullivan, who has criss-crossed the state getting ideas for the centre.

It is important to preserve and celebrate cultural traditions that make communities unique, Sullivan said.

"We are all folk of some community," she said. "Almost every state has folk and cultural arts programmes."

For example, the California Cultural and Historical Endowment preserves and protects that state's cultural resources, including artefacts, collections, archives, historic structures, and properties.

"Their mandate was to help preserve historic buildings or historic collections that were in peril," said David Burton, interim executive director of the Yakima Valley Museum.

Museums help keep local traditions alive, as do churches and organisations and groups such as the Yakima Hispanic Chamber of Commerce, the Sons of Norway, the American Historical Society of Germans from Russia, and descendants of Japanese, Chinese, and Dutch pioneers.

"There's strong interest in learning about the traditions of new immigrants, especially Latinos," Sullivan noted. "There's a lot of interest in connecting tradition bearers and schools."

In the short term, the centre wants to create an apprenticeship programme and develop local partnerships. In the long term, organisers plan a website with a roster of tradition bearers and permanent statewide partnerships. The website will serve as a clearinghouse of the state's cultural traditions, Sullivan said.

"He's one of the youngest corn husk weavers I know," said Miles R. Miller, an independent curator who organised the event.

Before the reservation era, Miller said, corn husk bags were about 2 feet long and 11/2 feet wide and were used to store roots. Most use today's smaller corn husk bags as a regular purse, he said.

"They're used as an everyday bag a very prized everyday bag," said Miller, who has been beading for about 30 years, learning at age 18.

Doris Shippentower, 59, learnt to thread a needle in the late 1960s, with her work getting increasingly intricate over the years.

She and husband George Strong Sr. sat behind two long tables at the event covered with their artistry, including entire outfits and other clothing, accessories, and bags.

"When I learnt to bead work, I'd make things like this to give to friends," she said, gesturing towards some of the bags and accessories.

Events such as the August 17 demonstration are important because they give the greater public a better idea of the value of Native crafts and traditions.

Miller enjoyed interacting with guests while creating art at the same time.

"I really enjoy doing bead work. It's almost meditative. It takes me away from stuff that's going on," he said.