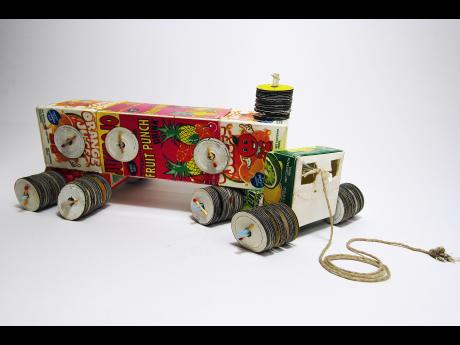 For this Christmas Season, National Museum Jamaica Institute of Jamaica, will be featuring Jamaican Toys.

Toys have been an important part of childhood since early civilisation and while children of today are different from those many years ago, many of their favourite toys have been around for centuries.

As far back as the 18th century children in the British Caribbean played with kites, wooden trucks, gigs, dolls and marbles. These toys represented the different types of activities that children were involved in, the social conditions in the society and they also reflect on the kind of culture that existed during that historic period.

Many of these toys were made quite differently from those that exist today having features which show a more hands on approach. In the past, many toys were made with whatever resources children could find, mainly scrap wood.

The first in these series of toys, is the home made Box Juice Truck. In the early 1980s these trucks were made by the children of the Arnette Gardens community.

They would travel to Sonic Sounds Record Manufacturing Company on Retirement Road for the vinyl record cut i.e. the middle section of the vinyl record to be used as wheels. Children would walk their community and look for many empty box juice containers to make the trucks. Some trucks were viewed as trailers due their length and the number of wheels that were used. The string that was attached to the truck, was pulled to move the truck from one place to another.

Kevin Clarke who grew up making box trucks in Arnette Gardens, says that he and his friends felt great pride after completing their trucks, and they were wonderful to play with.