Charting the history of Freemasons in Jamaica 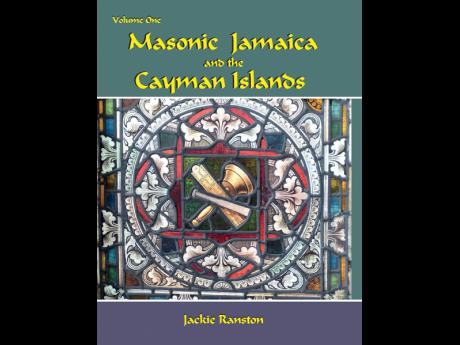 Jackie Ranston's latest venture into Jamaican culture, Masonic Jamaica and the Cayman Islands Volume One, brings to light the individuals who transformed the island in many ways, and in the process, Ranston makes the history of the Freemasons in Jamaica fascinating for all readers.

Commissioned by Walter Scott on behalf of their association to celebrate both the 300th anniversary in England of the formation of the first Grand Lodge and the 275th anniversary of the appointment of the first Provincial Grand Master for Jamaica, Ranston was given a free hand to investigate the Freemasons, defined as members of an international order established for help and fellowship between members, which holds secret ceremonies.

The foreword says: "The District, in deciding on its major project in celebrating these two important milestones was not unmindful of the following words of Marcus Mosiah Garvey, a national hero of Jamaica: A people without the knowledge of their past history, origin and culture is like unto a tree without roots."

The Freemasons originated as stone masons who constructed medieval cathedrals in Europe and gave the tools of their craft the symbolism of the brotherhood, to which even royalty belonged.

Brother De Cordova, one of the founders of The Gleaner, in 1874, noted the obligations laid on Masons: "All religion of a denominational character is strictly forbidden, equally with political matters, so that men of all creeds, but who shall believe in the Supreme Jehovah, and men of all shades of politics, shall be enabled to meet on the broad platform of the Craft as one ... ."

While the Book of Constitutions, published, 1723, stated that Masonic candidates had to be "good and true men, freeborn and of a mature and discreet age, no Bondmen, no women, no immoral or scandalous men, but of good report". After emancipation, the words "free man" were substituted for "free born" so that from 1847, former slaves could become Freemasons.

Past District Grand Master Afeef Lazarus, versed in Masonic lore, was, fortunately, also familiar with Ranston's success as author of Behind the Scenes at King's House, Belisario Sketches of Character, The Lindo Legacy, They Call Me Teacher: The Life and Times of Sir Howard Cooke, and more. Given the commission, Ranston enlisted her husband, Dennis, to design the book.

The Third Degree working tools of a Master Mason, photographed from a stained-glass window in the Kingston Parish Church, creates a splendid book cover and highlights the installation of a Masonic Corner in 1891 to honour Brother Dr Robert Hamilton, without doubt the most learned and distinguished Freemason in Jamaica, whose life comprises an entire chapter.

My own education in Jamaican culture is oriented to our African heritage, but never have I gained a greater perspective on what life among the merchant and governing peoples was like than through the individual histories provided in this book. Those who might wish to leave their estates or money to black or coloured family were forced to use subterfuge when thwarted by other planters. Ranston mentions the story of a Mason's wife shunned for allegedly sleeping with black men. The husband is granted a divorce, only to have the Privy Council overturn it with instructions that the Local Assembly must never again make such a ruling!

Ranston's marvellous selection of vocabulary and well-researched quotes make the book read like a celebrity diary. She notes that "Jamaica served as an arms depot for the revolutionary forces when two Kingston Freemasons, Wellwood and Maxwell Hyslop, financed the campaigns of SimÛn BolÌvar, the Liberator, to whom six Latin American Republics owe their independence". BolÌvar himself was a Mason, enjoying contacts with Brethren in Spain, England, France, and Venezuela until after gaining power in Venezuela, he prohibited all secret societies in 1828 and included the Freemasons.

NOT A SECRET SOCIETY

Dennis Lalor, chairman of the Freemason's Association Jamaica, notes: "The secrecy thing is a phantom. We are a society that has a few secrets, but we're not a secret society. Quite frankly, the most important secret is the way in which we are known to each other." Then adds: "The Masons do operate in secret. Whatever charity or good deed we do, remains with us. You will never see an ad saying the Freemasons provided an education for 50,000 Jamaicans. What we do, we do because we want to do it rather than because we want publicity."

The number of historic figures who were members or 'Brothers' is astonishing! They include everyone from Brother George Washington, first President of the USA, to Jamaica's Government Brother Thomas Bruce, 7th Lord Elgin, known now for the Elgin Marbles in the British Museum.

Those who think of Freemasons as being secretive are unaware of when "220 Brethren assembled at Freemasons' Hall on Harbour Street and marched in procession to the Tower Street site in full regalia" in 1845. Shops closed, and crowds came to watch. Earlier, in 1796, the cornerstone of the Close Harbour at Montego Bay was laid Masonically, with a procession of boats dropping a consecrated stone in the creation of the port's breakwater. A church service, banquet, and donations for the poor followed the event.

The story of Brother Robert Osborn and Brother Edward Jordan, both coloured Masons who worked on behalf of emancipation, makes intriguing reading, as does that of Brother Dr Alexander Fiddes, doctor to the poor, whose testimony on behalf of George William Gordon was ignored. Ranston's descriptions of the Morant Bay Rebellion, of the Revolution in St Domingue, and of the Ten Years War are compellingly lucid.

Ranston used every source from The Schomburg Center for Research in Black Culture; The New York Public Library; the National Maritime Museum, Greenwich, London; The Library and Museum of Freemasonry, London; The National Portrait Gallery, London; the Royal Botanic Gardens, Kew; the National Museum Kingston to Private Collections belonging to the Sharpe family; the Marquis of Sligo; the Facey/Boswell Trust, Jamaica, and more.

Not being a Mason, I simply ignored all the titles and Lodge names that might be of interest to members and just enjoyed a good read. As Lalor said: "I was glued to it. I couldn't put it down from the point of view of the history of the Caribbean."

Masonic Jamaica and the Cayman Islands Volume One can be obtained from the Freemasons Association of Jamaica by emailing Bob Forbes at: fmaj@cwjamaica.com.