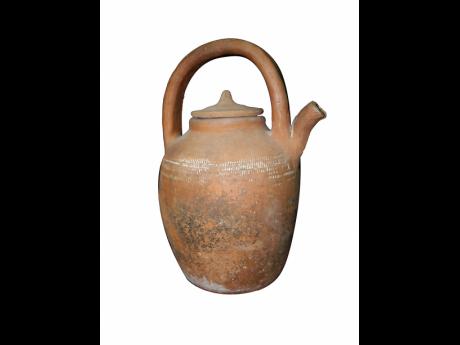 Our quest to unearth the artefacts from Jamaica's past continues. Before refrigerators, simple techniques and effective were used to keep drinking water cool. The monkey jar was one such container used for this purpose and was an integral part of Jamaican household.

Monkey jars have had a long and useful history in Jamaica, the wider Caribbean, and the American South. Monkey jars are earthenware teapot-shaped containers that were once common in every home for storing and keeping drinking water cool but are now considered which strictly decorative items.

According to Olive Senior, monkey jars incorporate both African and European ceramic features and were made for hundreds of years since many examples dating from the late 17th century have been found in Port Royal.

According to John Michael Vlach, author of the The Afro-American Tradition in Decorative Arts, the monkey jar may have got its name from the face jugs (jugs made with faces on them in South Carolina), which were generally known as 'monkey jugs' because porous vessels that were made for holding water and cooling it by evaporation were called monkey jugs.

Vllach goes on to state that the word 'monkey' in connection with water jugs appears in the Oxford English Dictionary as early as 1834 and that many blacks in South Carolina (who descended from slaves who were brought from Barbados) still use the word 'monkey' to mean a strong thirst caused by physical exertion.

These jars were so widely used throughout Jamaica that they were featured in one of Issac Mendez Belisario's sketches 'Water-Jar Sellers'.

In the accompanying text, Belisario states that when all of the impurities were removed from the water collected for drinking, a smaller jar such as the monkey jar was filled and arranged around the house and yard in places not exposed to the sun in order to keep the water as cool as possible.

Belisario also goes on to talk about the appearance of the jars, saying that Jamaicans were not wholly indebted to Britain and Spain for water jars because there were many potters in the city who were able to make varying types of functional water jars, which included monkey jars, which were not pleasing to the eye, but were able to keep the water much cooler when compared to their imported competition because of their porous nature.

Sources: Barringer, T. Forrester, G. Martinez-Ruiz, B. (2007). Belisario, I.M. (1838). Sketches of Character, in Illustration of the Habits, Occupation and Costume of the Negro Population in the Island of Jamaica. Yale Center for British Art in association with Yale University Press, New Haven London.