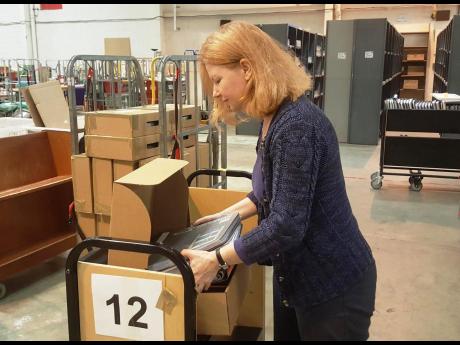 Contributed
Lynne Livingstone, books collection development assistant at RNIB Library, packs books to be shipped to Jamaica for the Salvation Army School for the Blind and Visually Impaired. 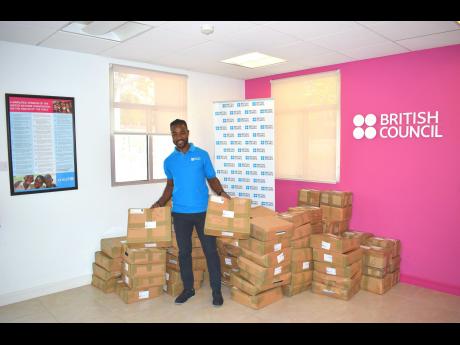 Contributed
Kiwayne Jacobs, caribbean media officer at the British Council, with over 118 boxes of Braille and large print books for the Salvation Army School for the Blind and Visually Impaired donated by Royal National Institute of Blind People.
1
2

The British Council, with the help of Royal National Institute of Blind People (RNIB) in Scotland and Flag Up Scotland Jamaica, will be donating 118 boxes of books in Braille and large print to the Salvation Army School for the Blind and Visually Impaired to mark International Literacy Day 2018 on September 8.

This is the second such donation for this globally-celebrated day, which saw the school receiving 55 boxes of books in 2017.

The school, which celebrates its 91st anniversary in November, is the only one of its kind in Jamaica. The consignment, comprises titles by children’s authors such as JK Rowling and David Walliams.

Sharing details on the activity, British Council Caribbean Media Officer Kiwayne Jacobs, who executed the activity last year, told Arts and Education: “Equality, diversity and inclusion (EDI) is at the heart of the cultural ambitions in the British Council worldwide. As an international organisation, we celebrate globally-recognised days, such as International Literacy Day. Last year, we decided to challenge the notion that people who are blind and visually impaired do not read, because a big part of reading conventionally requires sight. With the help of RNIB, we continue to raise awareness about inclusion and diversity; including in literature; so that disability is not seen as a setback.”

The school’s principal, Iyeke Erharuyi, pointed out the fact that there is limited access to books in alternate formats for the low vision and totally blind child in Jamaica. “We’re very grateful for initiatives such as this. Granting a child with visual impairment the enabling environment means they can break that glass ceiling. We would like to thank the British Council, RNIB and Flag Up Scotland Jamaica for their continued support of our institution.”

RNIB’s Diversity in Sight Manager, Gozie Joe Adigwe believes the first donation was perfect timing and she was pleased to have been able to make it happen.  “We hope this will help ensure that children in other countries aren’t excluded from the world of literature — a world that can do so much to help shape the person we become. I couldn’t imagine being deprived of my favourite stories from childhood. No child should be denied the chance to enjoy the same stories that stretch the imagination and sense of wonder as their sighted peers.”

RNIB maintains the largest collection of books for adults and children in Europe with a library of over 21,000 titles in audio, Braille and giant-print, lent free of charge to people in the UK with sight loss.

Olayinka Jacobs-Bonnick, British Council country director, shared her commitment to continue working with the school. “We are very excited to be able to donate an even larger consignment of books to the Salvation Army School for the Blind and Visually Impaired as a part of our World Literacy Day celebrations this year, and to underscore the fact that blind and visually impaired persons do actually read. Equality, diversity and inclusion is a key area of the work for the British Council worldwide.”