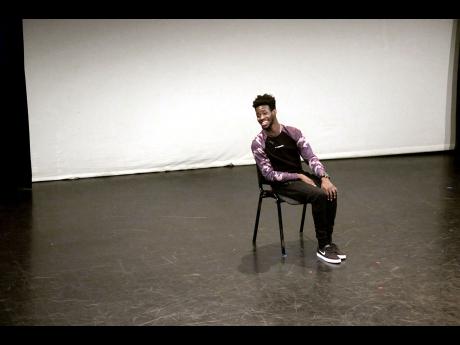 Contributed
Riddim performs at a Brouhaha Festival event at the Unity Theatre in Liverpool, England, on July 3, 2018. Riddim represented Jamaica among 200 artists invited from over a dozen nations at the two-week festival, an opportunity granted through the non-profit organisation Manifesto Jamaica. 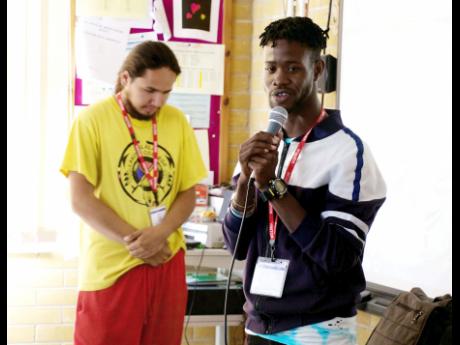 Contributed
Riddim leads a poetry workshop as a volunteer at St Michael’s in the Hamlet Primary School on May 23 during his three-month run in the United Kingdom, his second visit since 2014. At left is co-facilitator, Wanbli Ceya, a Native American musician and spoken-word poet.
1
2

Twenty-six-year-old spoken-word poet and actor Renard Anderson, who goes by the name Riddim, is one among many spirited young men inspired by Jamaica in his creative pursuits.

Riddim recently returned to Jamaica from his second visit to the United Kingdom (UK), since 2014, as a cultural representative for Jamaica.

His previous trip was as part of the Jamaica delegation to the Tin Forest Theatre Festival at the 20th Commonwealth Games in Glasgow, Scotland, at which he and nine other young Jamaican professionals presented a collectively authored play titled SomeNoWhere, to a roaring reception.

This time, his itinerary covered over 20 stops, the highlights of which were his appearances at the Brouhaha Festival in Liverpool.

The Brouhaha Festival is a network-oriented, yearly programme, which is organised by Brouhaha International, with a varying line-up of events and artists representing guest and host countries spotlighted in each installation.

This visit was facilitated by non-profit organisation Manifesto Jamaica.

"The festival was an amazing experience," says Anderson. "The different cultures culminated to create a different vibe, and I ended up being the only visiting Jamaican artist performing at the events."

The result was audience members approaching him at the end of each show to share their sentiments directly and to find out where he would be performing again.

The most passionate feedback they gave related to a poem addressing skin colour and racism titled 'Confessions of My Skin'.

Anderson, who is from Trench Town, describes his art as therapeutic and confrontational. "That's what I use it for while still entertaining," he says.

He is currently pursuing a Bachelor of Arts degree in Media and Communication at the International University of the Caribbean.

Before his appearance at the festival, Riddim participated in Brouhaha International's volunteer programme, collaborating with other global artists to execute a six-week-long arts programme at a local primary school for young children between the ages of six and 10. From there, he was recruited by a UK-based dance company to facilitate a storytelling workshop series for other children within a similar age range.

The same company also recruited him to deliver a workshop on the history of Anansi stories, at the Caribbean Music Festival, using his interactive style of presentation.

Building on the momentum from Liverpool, Riddim maximised the opportunity to perform throughout the UK by engaging with audiences at a wide range of events, including billed shows, open mics, and a poetry slam (which he won).

"I went to Leeds, London, and Birmingham to feed my taste for exploration," says Anderson. "I did over 15 performances, some of which I booked on my own. My art was greatly appreciated, more than it is in Jamaica, and I had my largest audiences to date."

Anderson credits Manifesto Jamaica for discovering him, but, more important, for preparing and launching him.

"I got comfortable talking about my art and doing my art because of the workshops, and, ultimately, the performances I did through Manifesto JA," he says.

non-profit in association with its newest international partners, the National Theatre of Scotland and Brouhaha International, respectively.

He recounts, "When they got the call from Brouhaha, I was seen as one of the qualified candidates in their network to contact, and I was in an ideal position of readiness to capitalise on the opportunity."

Since his return to Jamaica, he has continued to release poetry videos weekly on his YouTube channel, a practice he developed while away in England. He is preparing to stage a poetry concert in March 2019 and also producing a play for later release. Reflecting on the overall experience in England, he said, "I grew enormously as an artist and my writing has now changed."

Anderson advises young artists to keep dreaming. "Believe in yourself and in your art," he says. "You may think no one is paying attention or cheering for you, but trust that there always are people on your side. Work on yourself and put God first."