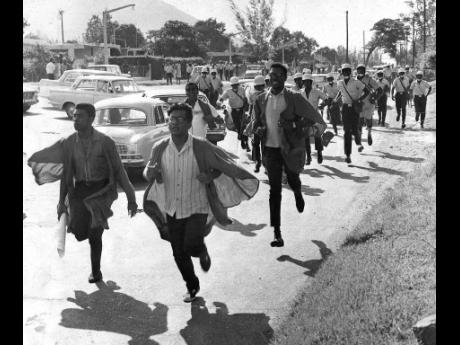 Gleaner photograph
Students of the University of the West Indies break through a police cordon along Mona Road, St Andrew, in 1968.

The University of the West Indies (UWI) Museum's newest exhibition highlights the timeline of significant instances of UWI student protest over the life of the university and a specific focus on events following the Government's banning of radical lecturer Walter Rodney in October 1968.

'CONFRONTATIONS: UWI Student Protest & the Rodney Disturbance of 1968' looks at Rodney's activities and agenda during his 10 months as a lecturer at The UWI and the students' response to his October 15 banning all within the context of traditional relationships between 'Town' and 'Gown' and within the context of a global wave of student protest against the status quo.

The Government's refusal to allow the Guyanese lecturer to re-enter the island after participation in a Black Writers Conference in Canada, leaving his family stranded, precipitated a march on October 16, rioting beyond the students' control, and an assertive government response that saw the Mona Campus ringed by Jamaican security forces for several days.

Museum Curator Suzanne Francis-Brown notes that research has turned up instances of organised UWI student protest dating back at least to 1960 when students expressed concerns over both local and international issues.

Students in the Mary Seacole Hall took hall issues into the public eye, and just weeks later, were among students and faculty on the streets of Kingston protesting the Sharpeville Massacre in South Africa.

These activities became a staple of the 1960s and were increasingly informed by international as well as local conditions, spurring the banning of intellectuals in the Caribbean and civil rights, race consciousness, and other socio-political struggles in North America and beyond. The student march and subsequent riot precipitated by the Jamaican government's banning of UWI Lecturer Dr Walter Rodney, a half-century ago this week, is a moment for reflection.

This is the latest output of 'UWI & the 1960s', an ongoing collaboration between The UWI Museum and the Department of History & Archaeology, UWI Mona Campus. Prof Matthew Smith joined Francis-Brown in curating the exhibition, with focus on producing a documentary, Disturbance 1968. Oral history inputs were led by Hon. Research Fellow Mark Figueroa.

The exhibition reopens January 2, 2019, after The UWI's Christmas break.