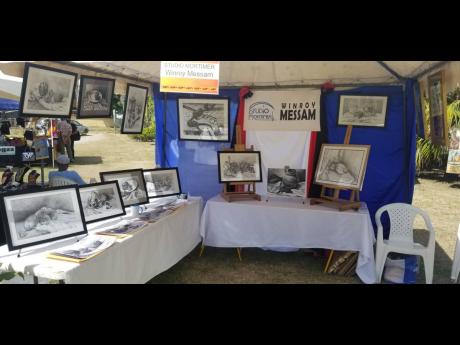 At the Association of Jamaica Potters’ annual art and craft fair held in December last year, Winroy Messam, at age 22, was probably the youngest artist selling his work at the event. On display and on sale, he had drawings done in ‘cross-hatching’, and they were quite an eye-catcher.

Cross-hatching is a painting and linear drawing technique in which the artist uses closely parallel lines to create tone or shade, texture, the illusion of light and shadow, depth, and indentations. Messam is using such techniques to create still life pieces, some of which depict Jamaican cultural and heritage symbols.

“What keeps me inspired is realism, the challenge of truth. Every time I seek to depict an object in its realest form, that is what I learned … and I live by it,” Messam stated. “So the better my drawing skills become, the more able I am to do that.”

Messam’s foray into art started when he was very young. The Mile Gully High and Pembroke Hall High schools graduate said that he was always interested in art and wanted to do art. A brother of his taught him how to draw car and truck images that they saw in telephone directories. At Pembroke Hall, he said he was encouraged by the teachers who recognised his talent, and through them, he drew a portrait of a former minister of education.

After going around doing murals under the guidance of Nasbern Lee, an art teacher, he was introduced by Lee to the Jamaica Cultural Development Commission’s 2013 visual arts competition, from which he emerged as the overall first-place winner in the youth category. Two years, later he dropped to second place in the same category. Success also came in the form of passes in CSEC and CAPE art examinations.

In 2013, Messam’s work was showcased at the Jamaica Conference Centre, and his prize was an art course taught by Mortimer McPherson, whose technique Messam said he admires. McPherson started him off with drawing with lines only. This, he said, he found challenging. He could not erase any error. He had to resolve the matter only with his pencil.

It took him a while to gain his confidence, he said, and now, he is drawing and selling his own cross-hatching pieces, which is a balancing act with his full-time job. It is sleepless nights for him and drawing on weekends.

“People might look at the drawings and just see it as drawing, but if they were to see how I come by it, they would appreciate it greater because I only use one pencil and no rubber whenever I draw,” he said.

And how far does he want to go with his art? He wishes to do some landscapes, he said, and portraiture, to tell stories with people’s face. He also hopes to evolve into painting one day, and the foundation that he is now getting in drawing will propel him into just that.

Apart from the financial gains, not being a starving artist, he said he also wants “fame” and to inspire people with his art. And in the long term, Messam said, “I want to be admired for my skill and my classical approach.”

He is still learning, he said further, and might need some help in completing a drawing course that he wants to do with NCTVET. “I have a great mentor and teacher and I do well learning art. What I need is just help in terms of funding, but I always work hard to sell my pieces, do portraits to assist paying for my studies,” Messam told Arts and Education.