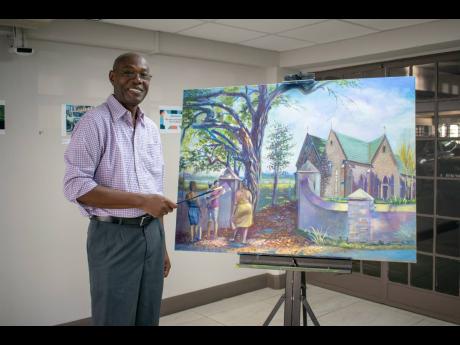 Dillon Allenye, an applied economist by profession who has applied econometrics and public finance, will be mounting his first solo exhibition Dis-Equilibrium.

The exhibition, a showcase of 30-oil-on canvas pieces, captures aspects of Caribbean spirituality, villages, round houses (or houses on the rock), mending nets, and highlights the simplicity of the region’s lifestyle.

Born and raised in Guyana, Allenye’s father was a professional painter, which inspired him to dabble in oil paint and kindled his passion for drawing.

His talent for drawing was spotted by his principal, who advised him to sit art although it was not offered as an examination subject at his high school. The advice was on point since the work of the untutored teenager impressed the renowned Guyanese artist Stanley Greaves – the chief invigilator.

He describes his works is a panorama of majestic Caribbean scenes that sustain his inspiration.

Dis-Equilibrium will be launched on March 5 and will be mounted until March 12 at the University of the West Indies Regional Headquarters.