At the confluence of faith and humanity 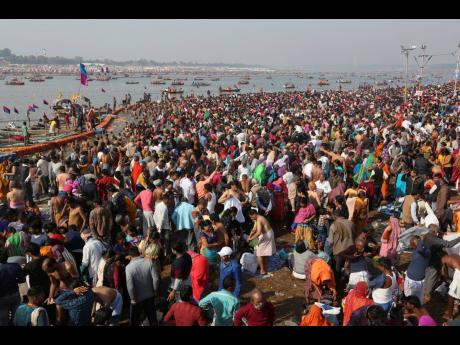 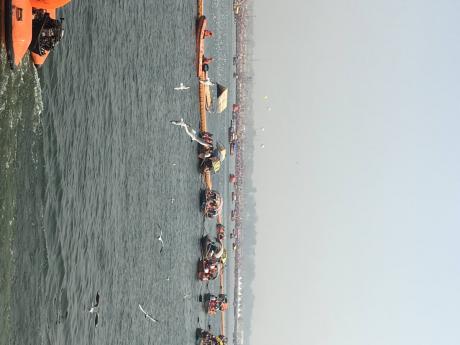 Roxene Nickle
The confluence of Ganges and Yamuna in the northen Indian city of Prayagraj, where Kumbh Mela is organised. 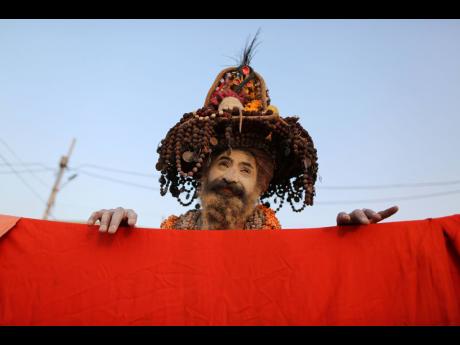 Rajesh Kumar Singh/ AP
A Naga Sadhu or a naked Hindu holy man stands behind a piece of cloth hung to dry at Sangam, the confluence of the Rivers Ganges, Yamuna and mythical Saraswati during the Kumbh Mela or the Pitcher Festival, in Prayagraj, Uttar Pradesh state, India 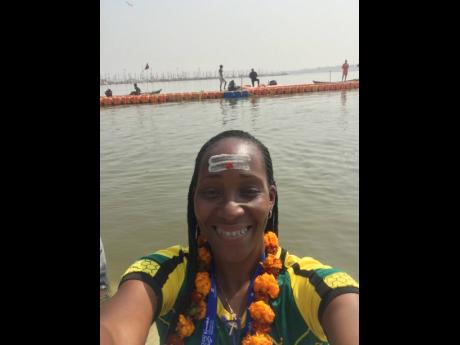 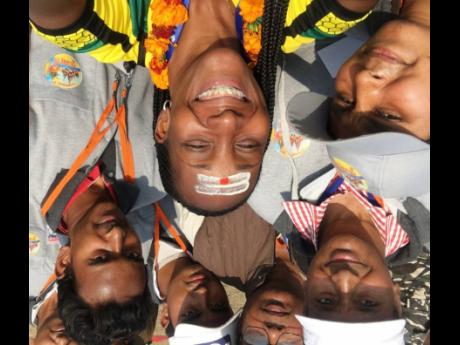 Roxene Nickle
The pilgrim - Roxene Nickle with some of the volunteers at the Kumbh Mela in Prayagraj, India. 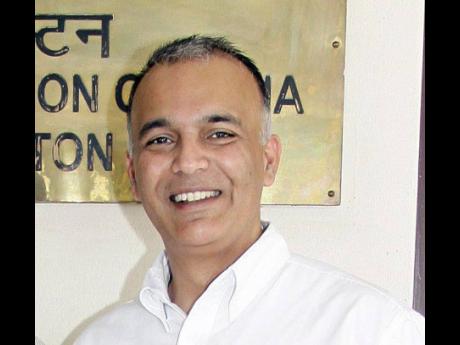 India – the mere mention of the name exudes a myriad of emotions – a riot of sights, sounds, aroma and humanity, there is not a single sensory perception that will not go on an overdrive. This is a country albeit where paradoxes co-exist side by side, is bound by immense spirituality, faith, and belief in the Supreme Being, which binds India into one thread.

For the first time visitor, all these glorified and romanticized statements can be tad bit overbearing.

“I was in awe when I landed in New Delhi, I have never seen so many people…ever,” said Roxene Nickle, a Jamaican media professional, who ‘survived’ the ‘never ending’ 14 hours non-stop flight from New York to India’s capital.

“I was left wondering,” she added. “How come so many people can fit and move at ease in a space.”

Didn’t we say India is a land of paradoxes…for those who travel to find inner peace and bliss are first hit by the sea of humanity; for Nickle, the pinnacle was yet to come.

A part of a delegation from 168 countries to witness the Kumbh Mela (festival of the sacred Pitcher) in the northern Indian city of Prayagraj (formerly known as Allahabad), at the invitation of the Government of India, Nickle represented Jamaica.

If the sight of “so many people” at Delhi’s Indira Gandhi International Airport shook her off the jet-lag – the days to come would change her perception of “sea of humanity”.

Kumbh Mela, inscribed in UNESCO’s Representative List of the Intangible Cultural Heritage of Humanity, stretches over 55 day festival, where pilgrims bathe or take a dip in confluence of the rivers Ganges, Yamuna and the mythical river Saraswati (also called Triveni – or the point where three rivers meet).

It is estimated that over 120 million pilgrims would participated in the Kumbh Mela which concluded March 4, and is recorded as the largest congregation of humanity on earth.

Nickle was one among those.

“I can tell you that it was a life changing experience,” she said. “To begin with, thinking of how such a humongous event can be organized, and run smoothly, is mind boggling.”

Mind boggling indeed - in the city of Prayagraj a new bathing area with 20 makeshift docks across an eight-kilometre stretch of the river were created. A tent city 87 colonies with basic amenities, with colony hosting 2,000 pilgrims and another 4,000 premium tents was set up. More than 10,000 policemen patrolled the 32-square-kilometre pilgrimage site, monitored by over 1,000 CCTV cameras.

The delegates flew from New Delhi to Prayagraj on a one-day tour to witness the festivities. “We (the delegates) were pleasantly surprised and at times overwhelmed by the welcome we received and the hospitality we were accorded,” said Nickle.

“Along the way there were school children waving at us, we had police escort and everything worked with clockwork precision,” she said. “We were treated like royalty.”

Witnessing and participating in the Kumbh Mela is believed to free oneself from the sins and liberating from the cycle of birth and death. This pilgrimage is said to be not only at the confluence of the holy rivers but also encapsulates the science of astronomy, astrology, spirituality, ritualistic traditions, and social and cultural customs and practices.

The Kumbh is held in four cities in India – Prayagraj (Allahabad), Haridwar, Ujjain and Nasik - every four years by rotation. The congregation includes holy men, ascetics, saints, and visitors.

Nickle said that she was pleasantly surprised that all of the delegates, immaterial of their ethnicities, backgrounds and diversity, were welcomed with warmth.

“A gentleman applied three lines and ‘bindi’ on my forehead,” she said. Tripundra, as these lines are called represent Shiva’s threefold power of will, knowledge and action, is symbolic of his trident and the holy trinity of Brahmā, Vishnu, and Shiva in harmony.

“Though there were a lot of people, things were order and the atmosphere was serene, it was this feeling that words cannot describe,” Nickle said.

“There was this is aura in the air, it was pious, spiritual, peaceful,” she said. “There were people praying, taking a dip in the river as far as one could see, and suddenly they would break into a chant, the whole atmosphere was divine.”

Kumbh Mela at Prayagraj holds a special significance in Hinduism for several reasons, the coming together of the rivers itself is considered as the centre of the earth in few scriptures, the creator in Hindu holy trinity, Lord Brahma is said to have performed prayers there for creating the universe. Significantly, Prayagraj is called the shrine of pilgrimages, performing rituals here is considered highest among all pilgrimages and provides one with the highest virtue.

Nickle dipped her feet in the waters where the Ganges and Yamuna meet, which, she said, permeated a sense of tranquillity – she transcended from the physical to the metaphysical plane – in bliss, blessed, and as for washing away the sins, we will leave that for another time…