Cornerstone of HOPE for the youth 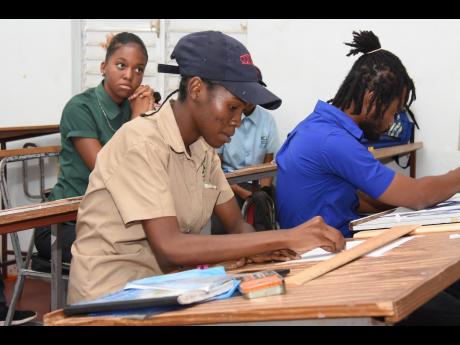 “I used to view myself as a failure, but now, I’m part of a skills training programme that is giving me the opportunity to earn and learn,” says 20-year-old Housing Opportunity Production and Employment (HOPE) programme intern Shameka Taylor.

The HOPE programme, according to Taylor, has helped her in enhancing her skill sets, and she is on her way to getting certified in construction. She is currently perfecting window installation and painting skills on site at Gore Development’s Housing scheme, Phoenix Park Village, in St Catherine.

Before beginning her official training in October 2018, Taylor’s main interest was sales and marketing, however, she decided that it would be a good idea to make herself more marketable by acquiring a skill.

“I wanted to have a certificate that would allow me to create some real options for myself in the future,” Taylor said.

She began her hunt for possible avenues and was directed to the HOPE programme by a supervisor in the National Youth Service (NYS) with which she had been associated since she was a high school student.

“At the time when I decided to sign up, I wasn’t exactly sure what area I would be placed in but I was looking forward to the opportunity to acquire a skill and be paid a stipend while I learned,” she notes

Today, Taylor is one of 24 interns who are actively completing the practical portion of their construction curriculum at Phoenix Park through an ongoing partnership between the Gore Family Foundation (GFF) and the HOPE programme.

Intern coordinator with the HOPE programme Novlene Ragbar describes Taylor as a natural leader who has been doing very well in her assigned area.

“Shameka has shown tremendous growth in her professionalism and confidence. She has also been grasping her skill training very well based on reports from the subcontractors who supervise and guide her daily,” Ragbar said.

Ragbar added that the entire cohort has been performing well and has shown much dedication to the programme and to their own advancement.

“This is the first batch of trainees to be enrolled in this programme, and we are indeed happy for the partnership with the GFF, which has provided them the opportunity for invaluable hands-on experience,” Ragbar said.

Director of the foundation Christine Gore expressed delight at the level of dedication and progress of the interns.

“They keep in touch with me and update me on their accomplishments pretty frequently. I am really proud of them and have nothing but great expectations of them for the future,” Gore said.

The students are expected to complete their programme in September 2019, and it is anticipated that the agreement will continue in an effort to facilitate additional trainees.

All trainees are closely monitored and guided by the subcontractors carrying out duties on site and provide feedback on their overall development on a personal and professional level.

Funding made available through the existing GFF/HOPE partnership provides the stipend payments for the interns for the one-year duration of their engagement with the programme.