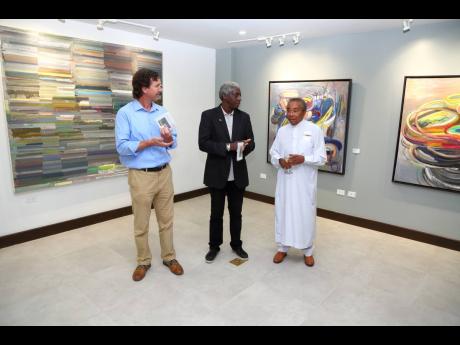 Visual artist Bryan McFarlane opened his latest exhibition, ‘New Beginnings’, last month, which is being hosted by hotelier Evan Williams as he launched the Gene Pearson Gallery located at R-Hotel and named in honour of master sculptor, ceramist, and teacher Gene Pearson, who passed away a year ago.

The exhibition seeks to breathe fresh perspective on Kingston at this time of the city’s development. Art lovers have another week to view the month-long exhibition, which ends on April 13.

Williams explained that McFarlane was chosen as “it was important to have an artist with international exposure, and Bryan is well known and exposed around the world”.

Williams described the works as “Brilliant … reflecting the influences of McFarlane’s travels to Beijing, China, and other countries”.

Entering the gallery from right to left, one can see the calculated placements of the 13 pieces by curator Dr Jonathon Greenland in realising his ambition for visual-arts tourism in Jamaica’s capital. The flow of the exhibition is done through reorganising fragments of McFarlane’s series along with one or two other pieces. Yet, together, they blend to bring you into a new way of thinking and can be summarised through ‘Like the Weather’ series (2019).

They also reflect how the artist has tapped into his past to face the future.

A descendant of Maroons, McFarlane is a global traveller who portrays transatlantic slavery and colonialism. He captures the Holocaust, warfare, periods of turmoil common to mankind then works out the effects on humanity before escorting viewers to overcoming challenges to glide across rainbows.

An intelligent colourist, McFarlane’s use of colour is hinting at similarities of the Fauvism movement and French masters such as Matisse. Across the room, energies are felt exuding from the pieces as the painter moves from grey to vibrant tones and gesticulates through embodied shapes and lines.

The 2016 oil-on-linen work ‘Silk Road Entanglement’ is, therefore, critical to the exhibition and pulls you into the idea of trade, even simulated trade. There is a hint of a woman being seductive as she spins this vibrant bundle of coloured thread into the slight shape of an organic vessel, perhaps symbolic of the ease with which one can get caught up in a discussion to end in profitable business deals.

McFarlane, who has lectured as visiting artist at universities and museums across continents, has done well to nest his creative pieces in the newest business hotel in Kingston for local and international art lovers to muse.