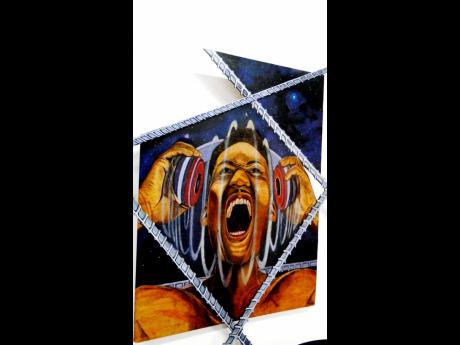 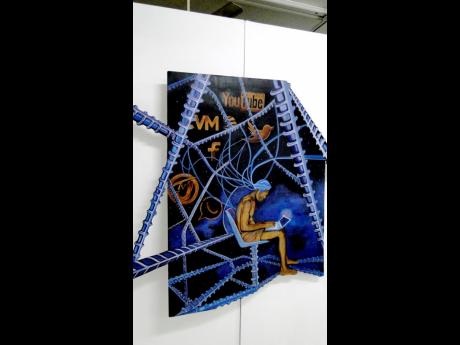 In February, which was celebrated as reggae and black history month artist and art educator Dushaine Lorraine mounted his first solo exhibition, titled ‘Mental Slavery Revisited’, at the University of Technology, Centre for the Creative Arts.

“‘Mental Slavery’ is a series of illustrated self-portraits on plywood that assesses the psychology legacy of enslavement as experienced by people of African descent in Jamaica, and elsewhere around the globe,” his artist statement said.

What, then, is mental slavery?

“Mental slavery is about how we see ourselves, our communities, our ancestors, our future, our relationships with technologies, and the future of our people. Certainly, we cannot ignore the fact that much of what we engage as social, cultural and political institutions is the result of strategies that historically impeded the positive association with the black identity,” the statement continuesD.

Lorraine told Arts and Education that his own issues with slavery started during his high-school days when he was always concerned about his African ancestors and who they were before they were enslaved. He was taught the impact of the Middle Passage and slavery itself but was never told who his ancestors were. “And that bothered me,” he said.

Some of his questions were answered when he read the autobiography of Martin Luther King Jr, and The Philosophies and Opinions of Marcus Garvey, and through the years he wondered about what it would have meant for his ancestors to be enslaved and shackled. But he also thought about mental slavery in this, the 21st century. “The shackles still remain, though they are not physical. They are more spiritual and mental,” Lorraine said.

“I found the topic of mental slavery fascinating as it allowed me the opportunity to analyse the power struggle continuum in the current era, which can be blatant and subtle,” his artist statement said.

Thus, his depictions of mental slavery are not all about the mental enslavement that is retained from slavery and post-slavery days. They include other elements of enslavement, such as modern technology that controls and enslaves us.

The seven paint-on-plywood pieces, ‘X’, ‘Vibrations’, ‘Techposure’, ‘Escape I’, ‘Contemplation’, ‘Piercing’ and ‘Escape II’, depict several ways in which people can be mentally enslaved, the misery and torment of enslavement, and efforts to break free.

Mental enslavement is represented by the recurring motif of metal bars, some of which are cut out, projecting from the paintings. The cut-out format is common among all of the paintings, making the shapes of the pieces very unusual.

There is only one person at the centre of each piece, and it is the artist himself. But why? “In the quest of finding self, and also purpose, one has to put oneself into the actual moment. So I did not have a better model than myself. No one could re-contextualise what I was reading, to convey my message to my audience … It had to be me,” Lorraine told Arts and Education.

And he summarised it in his artist statement thus: “The imagery presented is best engaged as a personal investigation of identity displacement that is brought about by the various colonial activities against the African people … Yes, these portraits are of my own face and personality, but what if they are replaced with your image, what would you see?”