Sunday dinner from the backyard 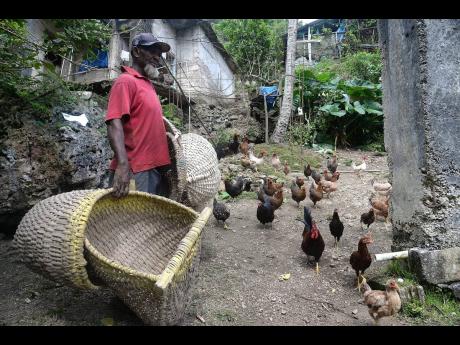 File
Seiwright Maise from Alderton, St Ann, with baskets that he has for sale. In addition to being a maker of baskets of all kinds, Maise raises common fowl and owns over 100-odd chickens.

We didn’t consider it even vaguely gross, and certainly not remotely criminal, many years ago. But try to imagine nowadays the ghastly horror of returning from church on Sunday after worship to behead a red rooster for dinner.

Killing and cooking your own backyard fowl was the custom across rural Jamaica and parts of Kingston in the ’60s and ’70s, and some families still do it. Many Jamaicans raised chickens in their backyards, and the birds provided meat for Sunday dinner next to the rice and peas, eggs for the whole week, chicken feet and chicken back for making soup, and feathers for stuffing pillows. Nothing was wasted. Folks moving into a new dwelling would sprinkle chicken blood on the floor to bring good luck. And since there were no smart phones with clock apps, the backyard rooster was also the alarm clock for the neighbourhood, dutifully announcing it was time to wake up with “Cock-a-doodle-doo!”.

Country fowls weren’t grand and stylish. They didn’t wait around to be fed. Some would forage around the yard to find their own meals, and sceptics didn’t always approve of their diet decisions. The more prosperous chickens would be fed with corn, and feeding time was a ritual when they would quickly gather by the sound of corn shaking against a metal container. The chickens with colourful feathers laid brown eggs, and white fowls laid white eggs.

Well,-off birds had coops for nocturnal luxury, but the less fortunate ones had to perch on low branches of trees to contend with the night dew.

As more rural folk got into the business of augmenting income by establishing chicken farms, commercial chicken feed became available, and one could buy a few pounds or a fifty-pound bag of chicken feed.

But back to the business of the Sunday dinner. Some families caught, killed, and seasoned their prized bird on Saturday for Sunday cooking, and others caught and cooked the bird on Sunday, with urgency, on the spot.

The actual slaughter of the bird was a messy spectacle. Chickens who think they are about to be curried are hard to catch, so ­taking physical possession of the bird was the first hurdle. The chicken was beheaded, usually by placing the body under a pan with the neck sticking out. Once this was over and done, the headless bird was released, and it then fluttered around for a few moments until it succumbed. Now motionless, boiling water was poured over the chicken to make plucking the feathers easy. It was then gutted, washed with lime or vinegar, cut up, seasoned, and cooked. Fried, brown stew, or curried chicken were the popular options.

Not everyone could endure the sight of killing a Sunday bird, but the task was necessary as few families had refrigerators in the ’60s, so the meats that families consumed were determined by a roster of availability at the local market or by utilising one’s own backyard livestock.

Some swear on the Bible that the freshly slaughtered common fowl is more delicious than the frozen ones from stores that are sometimes blown up with additives. In any case, thousands of cooks are happy they now have the option to pick up a chicken at the ­supermarket instead of having to catch and kill it, where, in some diaspora jurisdictions, the latter option is considered illegal ­without a permit.