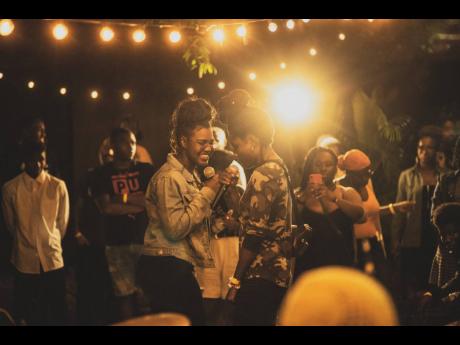 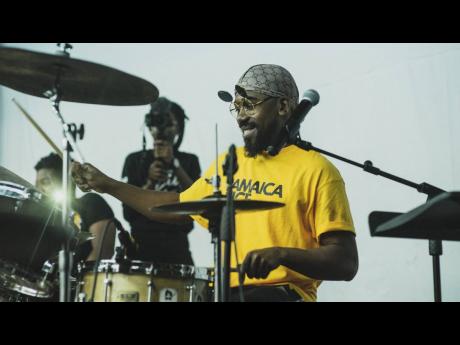 Contributed
Spanky demonstrating one of his signature rhythms during a masterclass at the Edna Manley College of the Visual and Performing Arts. 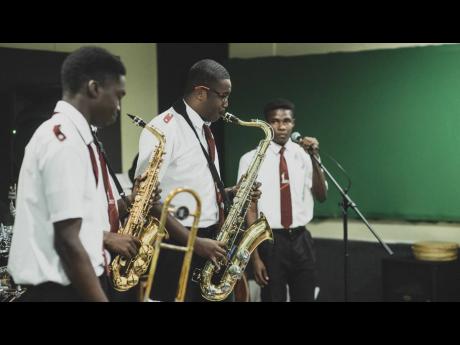 Contributed
Students at the Alpha Institute’s School of Music jam with Spanky during a masterclass.
1
2
3

An enthusiastic crowd of creatives gathered at The Haven on Friday, March 29, for a jam session and fundraiser in aid of music education.

Saxophonist Dean Fraser and members of the Zincfence Redemption band set a high bar for the acts that would follow, including Jah9, Tara Harrison, Jamila Falak, and students of the Edna Manley College of the Visual and Performing Arts (EMCVPA).

The spontaneous, all-star line-up of musicians played in effortless synchronicity, journeying from roots reggae classics like Satta Massagana to jazz and the neo-soul sounds of Sade’s Sweetest Taboo. Then, special guest and drummer George ‘Spanky’ McCurdy took the stage. The guest of honour, from Philadelphia, astounded with his distinct off-beat style, versatility, and fluent improvisation. It took little effort to coax other upcoming Jamaican vocalists on to the stage as some audience members seized the opportunity to perform with him and test their skills in the spotlight.

The jam session was the culminating feature of a week-long series of workshops and master classes delivered by Spanky at the Alpha Institute and the EMCVPA. Students from both schools, and members of the public who were in attendance, had the opportunity to talk technique and career evolution with Spanky, a virtuoso who has toured with Lauryn Hill, Lady Gaga, Jill Scott, Sean ‘Diddy’ Combs, and several other acclaimed international artists. Proceeds from the jam session, in the amount of JA$70,000, were donated to the scholarship fund for students at the Alpha Institute’s School of Music.

Reflecting on his time in Jamaica, Spanky said that “just being able to spend a week with the students at Alpha was amazing for me. I mean, it’s a privilege to be looked at for musical inspiration when in reality, they’ve inspired me! Their hard work, dedication, focus, and the support being built up around them ... I hope I helped them enhance their skills, ability, and the foundation they already have from the teachers and all the music that is in and around Kingston. I also hope they know they’ve made me better from the love they showed me.”

The 2019 March for Music Education residency programme was presented by Jamaica Nice, Manifesto Jamaica, the C.H.O.R. Foundation, and supporting partners in the local and international music community. The annual March for Music Education initiative is a catalyst for music education and employment training of young people, engaging musicians, record labels, management companies, and fans in an international effort to create a community of support focused on developing the next generation of Jamaican musicians.

Curator of the 2019 residency and tour manager Alex Rivas described the residency as “a platform and creative safe haven, giving Jamaican musicians the opportunity to collaborate and network with creatives and music industry influencers in other genres, and vice versa. It’s all about being present for the opportunity.”

Rohan Mitchell, a music student at Alpha who participated in the week-long programme, including the jam session said, “Since Spanky’s visit, we have been taking our rehearsals and individual practice time so seriously that we don’t wait for our instructor, Mr Samuels, to start anymore.” Commenting on the workshops and masterclasses, Mitchell reported learning about “the importance of counting, how to practise, and why practising is important, and also how to work together as a band to keep a steady pulse going.”