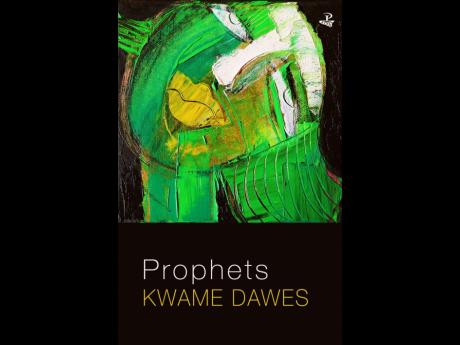 The narrative poem Prophets by Kwame Dawes captures the ­essence of Jamaican life, depicting the influences of the Bible, reggae and dancehall on the Jamaican psyche through the dual ­depiction of Clarice and Thalbot – both considered ­prophets by the poet but ­occupying ­different spaces.

Described by Jeremy Poynting, founder, Peepal Tree Press, and author of Kwame Dawes’ Prophets: A Reader’s Guide, (November 2018), as a major work of Caribbean poetry influenced in part by Derek Walcott’s Omeros, also a long-narrative epic poem, Prophets is now in its third life cycle, having been originally published in 1995 and again in 2003.

Written in tight, three-line stanzas and a style that lifts easily off the page, Prophets is Dawes’ third collection, with his first published anthology Progeny of Air (Peepal Tree Press: 1994) winning the Forward Best First Book Prize. His second published book, Resisting the Anomie, was also published in 1995.

Jolly buses, the ‘bogle’ and butterfly dance moves, and dancehall outfits such as the b***riders and p***printers, alongside DJs such as Shabba Ranks and Super Cat and the construction of Sovereign Centre Shopping Mall, are some realities that set the epic poem in the 1980s to mid-1990s era of Jamaican life. The apparent battle between the spiritual and the carnal, represented, or ­analogised, by the duality between the dancehall and church life, for Jamaica’s soul, however, is timeless, thus the relevance.

In some ways, also, Prophets can be read as an ­anthropological study on Jamaica, zeroing in on the time frame in which the evangelicals took over the role of prophet (the ’80s onwards) from the cultural prophets, such as Walter Rodney, and others from the ’60s-’70s era and even before, going back to Garvey.

We see a changing of the guard of sorts.

This, in fact, seems a very close book to Dawes, in that he embodies both being Christian and being grown in and around social revolutions. We could even go as far as saying that the duality Dawes depicts in Prophets could be his writing on his own internal duality.

The Rastafarian influence is also very present in Prophets, as Clarice, the prophetess in the poem, is from that background, with her father, Ras Pedro, being the parent from whom she inherited the seer’s eye. Clarice, therefore, should be very much au fait with the Nyabingi practices and the teachings of Alexander Bedward and Edward Carrington.

Clarice rises from her Wareika Hills poverty to being a caretaker and prophetess of a small church.

For Thalbot, Dawes draws on the Don Drummond presence in Jamaica’s collective psyche (felt in the ’80s-’90s, prevalent more in the ska ’60s), as seen below.

“… the spirit of Don the horn man reinvents itself

in Thalbot, the prophet, who guides the Black Maria

to an empty alcove, and waits, arms outstretched for the ­bangles (P.91)

As Dawes connects Thalbot to Drummond, we also understand that Thalbot sees himself as Jonah, the prophet in the Bible who God tasked to warn the people of Nineveh of impending destruction. After witnessing Clarice’s sin, however, Thalbot believes there’s no point in him warning the people, and since someone as holy as the prophetess could sin, perhaps the city should perish and make way for a new beginning. Dawes pens Thalbot’s thoughts below.

“Oh let the stones fall off the mountains

on this city of lapsed nyabinghi and renta-dreads.

wharfs and flame its way up the hills

gutting the mansions and the jeweled slopes … (P.125)

Dawes the poet however does not condemn or label Clarice a false prophet, because of the ­fall-from-grace-moment, witnessed by Thalbot. He actually condemns no-one in Prophets, but ably fulfils the writer’s role as chronicler and mirror.

On a similar note, lesser poets would have delivered Clarice’s tragic early circumstances with a heavier hand, but Dawes, with only his third book, considering he has penned some 20 books, displayed a mature grasp of human fragility, delivering what Poynting describes as a major poem with grace. Dawes only drops the image of Clarice being abused by her father into our heads.

Love for his country

In a poem of analogies, this love for a space, a dwelling, by a ‘madman’ parallels the poet’s love for his country. Like Clarice, Dawes migrates, but like both prophets, he loves Jamaica and is deeply affected by his homeland. In the following lines, however, the author reminds that God’s love for a people is even stronger than man’s.

has not fallen yet. So soft is the hand of the Lord,

so slow its descent upon the ­wayward, so gentle

Like Progeny of Air, which also chronicles Jamaican life – Jamaican high-school life, Jamaican single-sex high-school life, to be precise – Prophets should indeed be considered a modern poetry classic, a must-read for all who consider themselves poetry lovers or Caribbean literature lovers.

The epic, narrative poetry form is not a simple feat. It is one done masterfully, only by the masters, which Dawes clearly is. As Poynting says in the book’s blurb, “Time has shown Prophets to be a major poem in the canon of Caribbean poetry – an epic made of Jamaican materials … ”

If you have intentions of being a poet, read Dawes’ Prophets and see how a master delivers a ­country’s epic story in verse. A story full of life – heartaches, determination, triumphs, Warieka Hill squalor, Rastaman eating pork under the quiet, dark humour, and, of course, the dancehall charisma:

“On the beach, the sisters ­shoulder the soil,

as with martial precision, the arms

bogling rough on the beach with festival

piping in the dutch pan, and snappers

pinking in the onion and pepper seed.

b… riders exposing the jelly buttocks,

their sweat drips and is sucked in by the sand,

as Supercat in a fancy white tux

Prophets delivers the real, beautiful, but gritty Jamaica that draws your blood as it endears itself to you.

In Prophets, Dawes shows that the Christian can write sharply without abandoning his/her faith, as the poet sees Jamaica through biblical lens and delivers ­analogies on that Jamaica-Nineveh parallel and other biblical parallels.

If somehow Prophets is made into a movie, the accompanying soundtrack should include Don Drummond, Shabba, and Super Cat. That would make for an intoxicating accompaniment to the book.

Available at www.peepaltreepress.com or www. amazon.com.

- Ann-Margaret Lim’s second collection of poetry, ‘Kingston Buttercup’, was among the Bocas Prize 2017 poetry shortlist. Her books, including ‘The Festival of Wild Orchid’, are available at Bookophilia, amazon.com and peepaltreepress.com. Send feedback to annyinpin@hotmail.com.