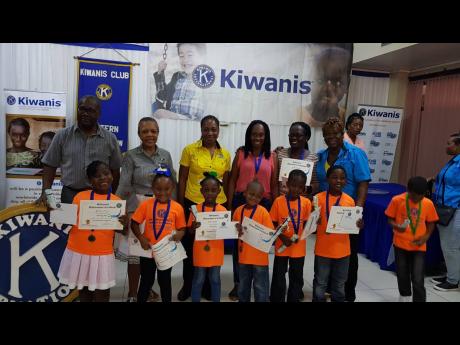 The Police Officers’ Club was abuzz with excitement on May 25 as the finals of the Kiwanis Club of Eastern St Andrew-sponsored 2019 Early Childhood School Challenge Quiz Competition got under way.

The competition, which started eight years ago, is for four-six-year-old boys and girls from pre-primary schools in communities ranging from Liguanea to Gordon Town.

The Kiwanis Club of Eastern St Andrew came on board in 2014 at a time when the competition was waning because of lack of sponsorship. The club has supported this initiative since.

“Kiwanis is all about helping children, and any initiative that promotes the well-being of our children is worth taking on. The competition inspires us to create a better world for our children and was planned to take place in Child Month,” Brown said.

According to her, the quiz competition is aimed at developing a holistic approach to learning. It is intended to help break the cycle of illiteracy and improve the educational standard of the schools.

The competition covers numeracy, literacy, and basic general knowledge. The contents and context of the quiz are geared at heightening children’s awareness, their ability to appreciate knowledge, and to develop their critical thinking abilities. The competition also exposes the children to the early childhood curriculum, allowing them to become adept in the various subjects while stimulating and providing the fundamentals for team work, sportsmanship, and fun.

Though the scale of this competition is smaller, it has a far-reaching impact.

“Parents and teachers who also worked assiduously to make this competition a success, have attested that children who participate in the competition are more rounded, more disciplined, and focused, perform better academically and go on to do well at the primary and high-school levels,” Brown said.