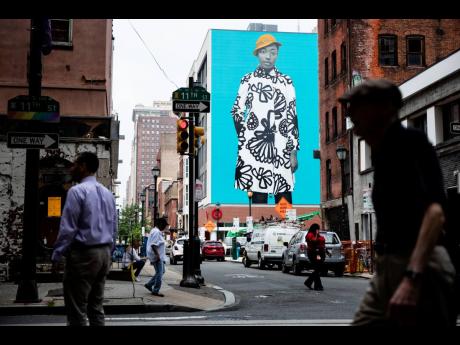 Matt Rourke/ AP
In this Tuesday, June 18, 2019, photo, pedestrians walk near a Mural Arts Philadelphia mural of Najee Spencer-Young by artist Amy Sherald in Philadelphia. Sherald is the artist who painted the official portrait of Michelle Obama.

A mural by the artist who painted the official portrait of Michelle Obama was dedicated on Thursday, portraying not a famous face, but a Philadelphia teen who has overcome personal challenges.

Amy Sherald might be best known for the painting of the former first lady, but her overall body of work represents everyday lives of black Americans.

Sherald told the Philadelphia Inquirer that she chose Spencer-Young as the subject after they met in January through a Mural Arts field trip to her studio. The teen was at first very quiet and pretending to be uninterested, she said, but when Sherald asked for volunteers, she popped right up for a photo shoot.

“After looking at the photos we took, I immediately knew she was the right model for this mural. I saw it as an opportunity to build her self-esteem as well as (that of) the other young girls that look like her,” she told the newspaper.

As for Spencer-Young, seeing herself as a work of art has been “kind of amazing”, she said on Thursday after the dedication.

She said that high school has been tough but she keeps her head up high and hopes the mural can serve as inspiration to others in her shoes.

“I see a brilliant young lady that is gonna get her life together,” she said of her image.