A rationale for existence of Israel 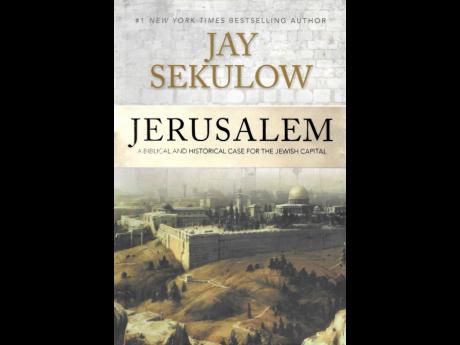 A review of Jerusalem: A Biblical and Historical Case for the Jewish Capital by Alfred Sangster

The book Jerusalem: A Biblical and Historical Case for the Jewish Capital – of 338 pages, authored by attorney Jay Sekulow, was published in 2018 by Trilogy Christian Publishers, a wholly owned subsidiary of Trinity Broadcasting Network. It has seven sections with 16 chapters.

There are extensive notes in all the chapters.

The review will summarisae the ideas, principles, or positions from each section of the extensive material being presented in the book.

Publishers of the book state: “The definitive – and urgently needed – argument for the legitimacy of the nation of Israel.”

His book is a must-read for those committed to defending the State of Israel. Jerusalem is, always has been, and always will be, the true capital of the Jewish people.”

The author introduces the reader to “the new war zone” which challenges Israel’s right to exist. The Boycott, Divestment and Sanctions (BDS) movement is one such agency. The American Center for Law and Justice (ACLJ) is the central Israeli agency to fight for Israel’s rights to its very existence and the legitimacy of the Jewish State of Israel with Jerusalem as the capital. He argues that the emerging “lawfare” is built on a stack of lies.

The patriarch Abraham and his family history is a key factor with the concept of a covenant between God and Israel - Abraham’s seed – with God promising Israel the land as their home.

The evidence of archaeology supports the biblical picture. The Jews lived under the many conquests of the Holy Land, through the Crusades and Muslim rule as well. They have never abandoned the land of Palestine during these 4,000 years or the city of Jerusalem.

The Balfour Declaration of 1917 proposing a home for Jews in Palestine was one of the most significant documents of the World War 1 era. There were also supporting Mandates. Subsequently, Israel declared its independence in 1948, became a UN Nation in 1949. Israel has won many wars with neighbouring countries who challenged their right to exist, including the Six-Day War in 1967.

Many institutions – political, governmental, historical, religious, and more – are based in Jerusalem, which has been named the eternal capital of the Jewish state of Israel. In the victorious Six Day War, east Jerusalem, under Jordanian control, was captured by Israel and the city was formally unified. The international community has rejected Israel’s claim to the area. This controversial matter remains to this day. Israel, however, now exercises total control of the city of Jerusalem.

SECTION 6-ISRAEL AND THE LAW: ANCIENT PRINCIPLES AND MODERN LAWFARE

Israel’s commitment to govern by the “love your neighbour” principle is evident in how it governs its own citizens, how it reacts to other nations, and how it treats its enemies. The ACLJ strategy is to challenge the BDS movement worldwide.

Israel is continuing to fight against bigotry and hatred, and the ACLJ and its media supporters articulate its key positions: Jewish people have a right to the land known as Israel, have a right to their existence under international law, and have always lived in Israel, with Jerusalem as its capital.

Sekulow’s grandfather travelled to America in 1914 aboard a boat that took him past the Statue of Liberty. Sekulow has both children and grandchildren in the United States, and he reflects that hundreds of his family members, on both his father’s and mother’s side, were wiped out by the Nazis in Europe in the Holocaust of World War 2 because they were Jewish. A deep scar has been left behind. Sekulow is a counsel to Donald J. Trump, the 45th president of the US, and was present in Washington on the day when President Trump announced that the United States would move its embassy from Tel Aviv to Jerusalem and officially recognise Jerusalem as the capital of Israel. This important piece of legislation was passed in December 2017 and the embassy has since been relocated.

This has been a most significant and unexpected move by the United States. Previously, both the US Senate and House had passed the Jerusalem and Embassy Act of 1995. Former Presidents Bill Clinton, George W. Bush, and Barack Obama all delayed enacting the resolution, and instead, “kicked the can down the road” for someone else to deal with.

The book would be enhanced with a page of abbreviations, maps, or illustrations and an index, which is mentioned in the content but is not included in the book.

Dr Alfred Sangster is president emeritus of the University of Technology, Jamaica.