A sobering look at culture and mental health 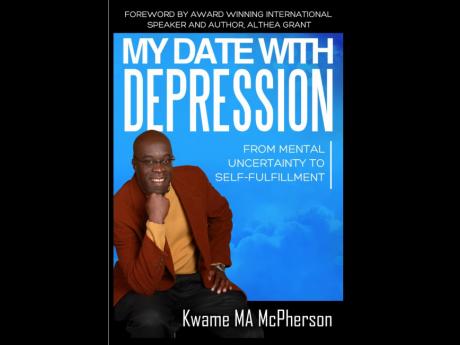 Book: My Date With Depression: From Mental Uncertainty to Self-fulfilment

M y Date with De​pression breaks new ground on a little understood illness and a taboo subject in the black community. Kwame M.A. McPherson deserves credit for his authenticity and candour. He is deliberate at the outset, citing statistics and studies on depression.

He invites us to reflect, presenting questions that could unearth buried sentiments. He remains cautious. Disclaimers are set in place, for he well understands that his undertaking is far from a clinical study. But his plain-spoken approach covers ground, potentially reaching a very wide, eclectic audience.

McPherson deftly peers into the black construct, dissembling and reassembling portions of its collective psyche.

He sets the stage for his date with calamity, brilliantly capturing the zeal and optimism associated with launching a new business and the optimism of migrating to Canada from London.

But ephemeral was his anticipation.

He recalls, “I invested in businesses and purchased property without the financial wherewithal or knowledge ... I was like a child seeing the beautiful blue and warm Caribbean Sea for the first time, diving straight in without the thought of whether I would swim or sink.

“I applied and got lines of credit and just went crazy. Thousands of dollars I might add! To say I nearly drowned was an understatement. There I was without any floatation devices, paddling like a new born, going nowhere fast.

“I was scared. The impact of watching my fledgling empire crumble about me was hard to take. The business went under. My property disappeared. What made it worse was that I could not face the other people who had believed in me and invested in me. The calls began and I chose to hide from all and sundry, refusing to take them. You know the ones from creditors and the trusted partners I brought into one business … there was absolutely nothing I could possibly do and with no answers, huge debt and a failing relationship hanging over my head; I was speeding to oblivion.”

His pride was dealt a blow, his veil was rendered, and beneath the surface loomed a fractured self, a wounded spirit craning for healing. He concedes, “Having [my girlfriend] in my space brought out deep-seated, underlying, generational emotional baggage or what had been inherited from before. This burden, a residue of the traumatic relationship between my parents, when I – a five or six-year old.”

With vivid language, he recounts that trauma: “I witnessed the violence and abuse my father inflicted upon my mother. The images as real as if I was the star in the unheard of film.”

McPherson understands these latent fissures but fails to reach for the psychoanalytic handle needed at this critical juncture. He continues to flounder.

Left untreated, this wound metastasised, destroying his ability to be calculative and judicious. McPherson talks about his sterility, the loss of his sensibilities and his inability to look beyond the surface. “I was not in touch with my feelings or knew how to convey them,” he notes. “ How I wore the proverbial mask and found it hard to open up about my physical, mental, emotional and spiritual pain, clamming up tighter than a sea clam, trying to find the answers from my own limited mind and know-how.”

As his business ventures crumbled and he was faced with mounting debt, he recoiled. Aloof and tortured, he struggled for relevance. In this existential struggle to find meaning, archetypal conflicts, long part of the Black Unconscious, come to the fore. McPherson’s journey to Ghana and his decision to be baptised only stirred his raging conflicts.

He pens: “Being baptised had not stopped my struggles and things only got worse. I became more isolated and clung to the c hurch as the battle raged within me, especially after being aware of my ancestors’ true story. I felt that religion, whether Christianity or any other, played a massive role in enslaving them and it was harder to balance and digest its involvement in my life and my efforts in seeking so-called ‘salvation’.

“Slavers used Christianity as a way of subduing the spirit of African people and for me and for that reason, I recognised that my impending enlightenment was not aligned with any church or its teachings. My ancestors had laid the foundation and I eventually found that salvation started from within me.

“Within myself I found it ironic that those who professed to follow the Christ and supposedly loved their fellowman, allowed a cruel crime of humongous proportions to take place right in their view. Or better, yet under their noses. What did that say about them and their ‘religion’?”

The salvific gift of the church eluded him. His condition worsened.

His serendipitous experience at Niagara Falls, his catharsis in Ghana and tortured romance with Christianity forced him to look within, to ask himself the toughest of questions.

The truth stood stark before him.

“I thought that over the months and years I had made the time to work on myself, by reading the right books and attending the correct personal development seminars, hoping this would help me to recognise the behaviours. Yet all I was doing was plastering over the scars and failing to deal with the source of my behaviours. Maybe that was my arrogance. Being Mister-Know-It-All. Maybe I had felt I was “healed” after attending a few self-development seminars.”

Healing, he discovered is never skin-deep. He learned to acknowledge and nurture the wounded child he had long carried, a traumatised child that had spawned the false self, his lie to the world.

Eventually, Providence smiles and eases McPherson’s burdens but not before he commits to a path that will bring genuine healing and redemption. Therein are lessons to be learned.

While My Date With Depression chronicles the experience of one man, it speaks to a global audience, in particular, a black audience. Seamlessly, it encapsulates the struggle of a people searching for meaning, a people unconsciously grasping for identity.

Book: My Date With Depression: From Mental Uncertainty to Self-fulfilment by Kwame M.A. McPherson

Available at Amazon in August. Preorder at http://bit.ly/2VixzOk