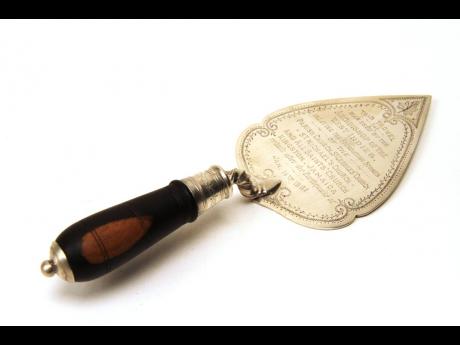 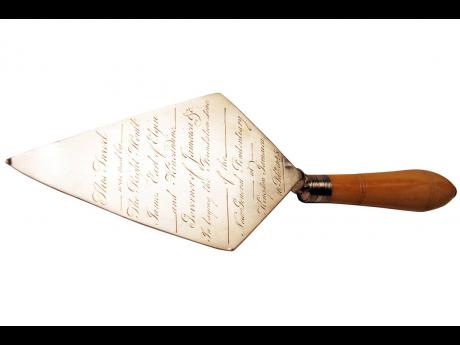 JAMAICA’S ARCHITECTURAL heritage is one of the most diverse and readily seen examples of the creativity and skill of the Jamaican people. This heritage consists of buildings such as churches, courthouses, industrial structures such as factories and aqueducts, great houses, and small, vernacular houses, among others.

If you observe many of the buildings in downtown Kingston, it is easy to see that the history of the city is embedded in many of the older building. One can see the impact of colonisation, the rebirth of the city from the devastation of fires and earthquakes, and the gradual modernisation of the city.

While many of these buildings are admired for their stately appearance and use of materials, their smaller, less conspicuous features, markings, and the historical significance connected to their actual construction and establishment are usually overlooked and forgotten.

Many of our buildings bear foundation stones. Foundation stones are also known as cornerstones or setting stones. They are pivotal to the placement of a building’s foundation as all other stones will be set in reference to them, determining the position of the entire structure.

As time passed, the cornerstone took on a ceremonial purpose, and was set in a prominent location on the outside of a building, with an inscription on the stone indicating the construction dates of the building and the names of architect, builder, and other key individuals.

While many of these ceremonial cornerstones can be seen and are still employed to commemorate the construction of buildings, there are other ceremonial objects that are sometimes used to mark the opening, especially, of public buildings. These may include special scissors used to cut ribbons, spades for turning the soil, and trowels to lay mortar during ceremonies to mark the setting of the foundation stone.

The idea of celebrating the construction of a new building by the use of ceremonial scissors and spades has remained in vogue. The ceremonial trowel, however, seems to have been forgotten. The idea of celebrating the construction of buildings is not new as this tradition has been recorded in England since the 16th century, and the use of ceremonial trowels appears in the 1800’s and became increasingly popular in the 18th and 19th centuries. This tradition was encouraged by British architects who often would acquire and collect trowels inscribed with theirs and the names of eminent property owners, architects, engineers, and clergy.

The tradition of celebrating the construction of new buildings spread throughout Britain and her colonies, including Jamaica.

The trowels found in Jamaica, unlike those in Europe, rarely bore the names of the architects. Instead, the name of the highest-ranking person present at the stone-laying ceremony, as is the case with the Kingston General Penitentiary, known today as the Tower Street Adult Correctional Centre. Records indicate that the prison was originally built to accommodate 650 male inmates but has held over 1,700 on various occasions.

Construction of the current building began in 1845, shortly after the end of slavery. The penitentiary was designed according to the ‘separate system’ in which prisoners are held in isolation, although in practice, sharing of even the smallest cells has been common. The foundation stone was laid by James Bruce, 8th Earl of Elgin and 12th Earl of Kincardine who was a British colonial administrator and diplomat. He served as governor of Jamaica from 1842 to 1846, as governor general of the Province of Canada from 1847 to 1854, and Viceroy of India from 1862 to 1863. In Jamaica the earl is said to have succeeded in winning the respect of all as he improved the condition of the native workers and was able to pacify the planters by working with them.

The trowel used at the Kingston General Penitentiary takes after the traditional shape of the brick layers’ trowel and features a wooden handle, and is inscribed with the following. “This Trowel was used by, The Right Hon’ble, James Earl of Elgin & Kincardine Governor of Jamaica In laying the Foundation stone Of the New General Penitentiary at Kingston Jamaica, 18 Feb 1845.

In 1660, after subjugating the Spaniards, the British established civil administration and appointed the first governor. Among his instructions were to give encouragement to ministers “… that shall be sent unto you that Christianity and the Protestant Religion according to the profession of the Church of England may have a due reverence and exercise among you.”

There was apparently a delay in implementing this, and it was not until 1664 that the first clergymen arrived on the island, which, by this time, had been divided into seven parishes.

The first church to be established was the church of St Jago de la Vega in Spanish Town. This was built sometime between 1661 and 1664 on the ruins of the Church of the Red Cross which was of course Catholic. The church has national and regional significance as it is not only the oldest Anglican cathedral outside the British isles, but the site it occupies is among the oldest sites of continuous christian worship in this hemisphere, the church having stood at that same location since 1538.

After St Catherine, churches were established in the parishes of St Andrew (Half-Way-Tree); Vere, (Alley); Port Royal; St David’s, (Yallahs); St. Thomas in the East (Morant Bay); St John’s (Guanaboa Vale); St Dorothy’s (Old Harbour), and Clarendon (Chapleton). As can be seen, some of these parishes no longer exist. Anglican churches were established in all the parishes as Jamaica developed. The original structures of these early churches were often destroyed by earthquakes and hurricanes and were rebuilt several times. The absence of records makes dating the establishment of some of these churches difficult. This trowel also in the shape of a brick layers trowel has a wooden handle and silver body and is much more intricately decorated than the previous trowel. The inscription on this trowel reads: “This trowel was used by the Archbishop of the West Indies In the Laying of the Foundation Stones Of the Parish Church, St Georges Church, St Michael’s Church And All saints Church Kingston, Jamaica Rebuilt after the Earth Quake of Jan, 14th 1907.”